Second installment of the story of the rocker sound initiator in the city of Santa Fe. 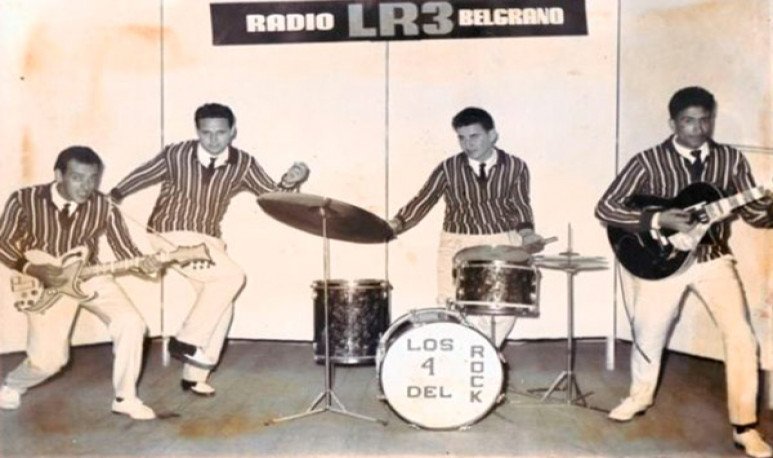 The history of this note is centered in the  early 1960s.   By then, seeing the electric guitar on a live stage was something unheard of in the city of Santa Fe. That instrument was only associated with jazzy , very widespread in the city. Imagining this is key, to try to understand the novelty that produced in the world the emergence of rocker sound.

On par with his initial passion for rock and roll,  Emil Vilar's dream was to sing in a big band . This came true in 1964 as the Harlem Jazzy Band called him to be part of it, after listening live to Los 4 del Rock.

After the excellent experience of the Harlem Jazz-Band, Villar began his solo career in 1966.  He is called for an opening show along with other renowned artists from the time of Canal 13  in Santa Fe. Emil recorded a dozen songs, once a week, that were being broadcast during the afternoon broadcast of that cycle.

Another dream, like most musicians, was to  professionally record and edit their own material . The vinyl record came only in 1970, the year in which he managed to record his craved simple. It was recorded in the town of Colastiné , on tape tape with his ensemble of that time, Los Diablos. That record led Capital Federal to mix and master in the best way. “A flower fell” (subject of his authorship) on one side and “Far from the eyes” (theme that varies its original title according to the country and was well known in the voice of Diango). The owner of a local record store took care of the edition and the corresponding copies.

After this “sensation of the moment” as far as rock itself is concerned,  there were other expressions of the genre in the city.  In 1963 The Jimmy Boys primitive basic rock group formed by students from La Salle Jobson School, was in charge of animating student parties. In 1964 Los Vampiros were born, which is the continuation of the previous band with the addition of some member changes.

Already by 1965 the genre exploits and appear the most renowned artists, composers and bands at the same time as their own works and the brilliant contemporary poetry of that & eacute; little . There are also festivals typical of the style, some even precursors in the country  ; in general, when we talk about the origin of Satafesino rock, it is the latter part that is mentioned. Few place the history of Emil Villar as the true forerunner of a rocker style. There is even a very interesting documentary made by Santafesino professionals in the audiovisual area. But they also don't allude to this founding stage that we rescued here.

As an anecdote, some remember a story with  the very creator of the santafesina cumbia  as their own genre. The mythical Juan Carlos Denis stepped on the tables for the first time and felt the adrenaline of a live show as a guitarist for Emil Villar and his ensemble.

“ I made a lot of money, but just as I had it, I enjoyed it,” said Emilio, when I remembered those “crazy years.” His last live shows were in 1973 at the Ferrocarril del Este Club in Diamante (Province of Entre Ríos). He stopped singing for personal reasons. “Life does not always play a good pass,” he knew how to say too.