Sosa, Ceña, Chanampa and Gauna gather to be “Gallos cantores”

The meeting will be next Thursday in the Buenos Aires neighborhood of San Telmo. 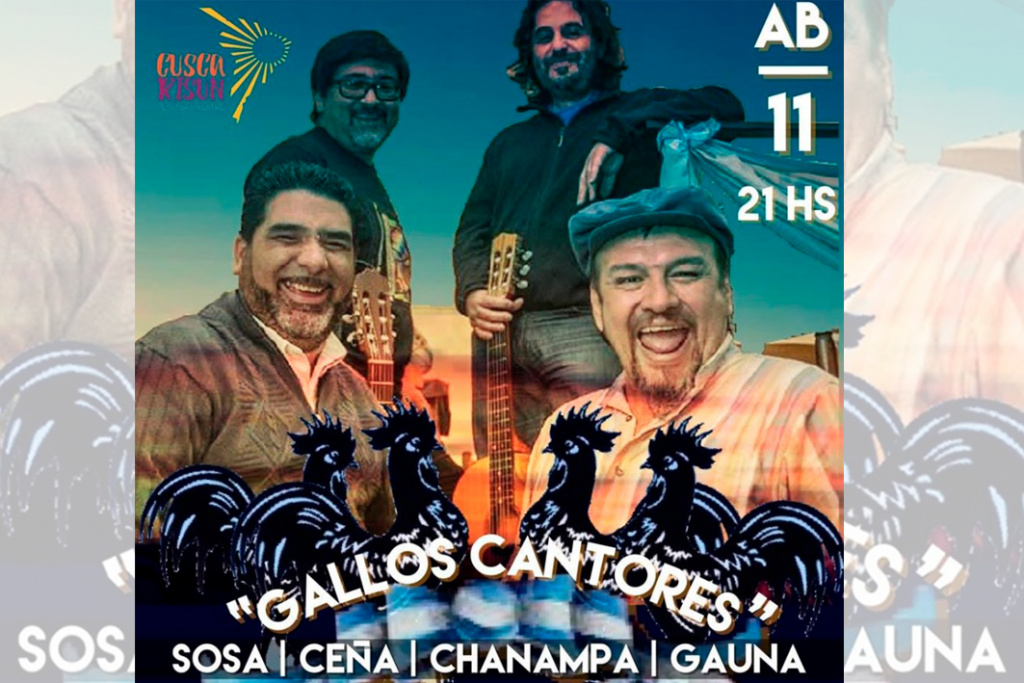 Four exponents of the folk song that refer to different regions of the country, such as Claudio Sosa (Tucumán), José Ceña (Buenos Aires), Flavio Gauna (Formosa) and Marcelo Chanampa (La Rioja), will share the meeting “Gallos cantores” next Thursday in the Buenos Aires neighborhood of San Telmo.
The gathering promoted by the producer and filmmaker Silvia Majul will bring together the repertoires of each soloist and pieces to share from 21 on Thursday in the Cusca Risun room (Pasaje San Lorenzo 365).
Sosa, nephew of Mercedes and with an extensive career, finishes a new solo album while touring, as for 12 years, with Facundo Ramirez and holds the duo Tinku with Jujeño José Simón.
Ceña, who recorded the albums “Junto al sol” (2003), “Canciones del mensajero, obras de Atahualpa Yupanqui” (2008) and the recent “Pagan de dónde soy”, was invited to the Guitar Festival in Cevennes, France; while Chanampa, who integrates the quintet Albahaca and the Vocal Consonante choir, was released solo with “Andar solo no it reaches.” In
turn, the formoseño Gauna, maker of the albums “Madrejón” (2008), “Formosa en el aire...” (2012) and “Mooring” (2017), currently works on two new materials: “Mbojeré” and another on the life and work of Dr. Esteban Laureano Maradona (a rural physician from Santafesino and based in Estanislao del Campo, une Formosa). to the poet Santafesino Sergio Geese.
Télam: What do you feel that brings you together right now?
Claudio Sosa: The artistic maturity of each of us is what I think led us to the “feeling” between us is instantaneous. And there is also the patience of the singer-out who allows us to rid ourselves of individualism and think more about the collective.
Marcelo Chanampa: Mainly, the desire to sing, to get together and meet. When everything is becoming very narrow, with cultural spaces closing, high costs to produce and generate projects, it becomes essential to find oneself in the other as something palpable and necessary.
Flavio Gauna: I feel the need to know that we can count on “the other”, recognize each other and continue to work for identity.
T: What do you think can be the contribution of this meeting to the popular song?
José Ceña: We believe that this is the first time that four soloists meet to share the same project where the collective grows through each individuality and the main protagonist is the song to which each one delivers from these four possible realities. Perhaps our contribution is that, to bring together the four paths at the same point to continue to walk from there.
CS: The musical diversity of the folk map of our country united in a single song, where the landscape is present, but also the social reality of the people who inhabit that space.
MC: To provide part of our songbook of both consecrated and homegrown authors, painted with the color palette of each region to which we belong. And so show that folklore is something alive and in full growth.

Devotees of the “Mamita de los Cerros”, ready to undertake the ascent

Show him that he also respects when you eat.

May your dog come to the call

Habiting Simba to the muzzle

Why do we have to get to the climax together?