From El Chalten, Siete Veas makes every date a party. 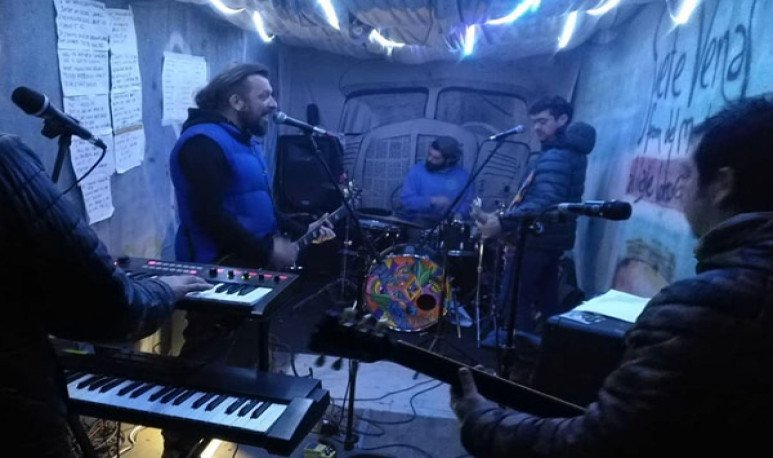 Formed in the   santacruceña  city of  El Chaltén   , the band  Siete Veas (or Siete Veas) From del Monte) takes an extensive tour taking his music in different parts of that province, the country, and also on the other side of the Atlantic Ocean.

Formed in 2004 , the Siete Venas proposal has a fusion of e ska,  punk ,  folklore and  cumbia   with more than catchy rhythms that invite you to listen carefully to their lyrics but also to dance while enjoying their music.

Why Seven Veins? The name of the band is for a plant with healing properties  that is used to treat conditions of various kinds such as dry cough, bronchitis, colds, colds, pharyngitis, fever, digestive ulcers, dermatitis, wound healing, ulcers and herpes. The Seven Veins consider that “with music we bring joy to people; as a medicine.”

The band's beginnings were with covers by Manu Chao  and national rock groups, but soon they began with the production of their own songs. In 2007 came the  first demo of the band:  From del Monte  , which consisted of eight tracks recorded in the town of  Río Turbio .

The lyrics of Siete Venas go and come between  Patagonian  sentiment and life in the south of the country, with the majestic landscape of that region, along with the loves and disagreements that any human being can happen.

El Precio Amigo   was the band's first official album, recorded in the studio El Cangrejo de la mano Goy, leader of Karamelo Santo , who also put his music on the song that opens the material record: “Homenaje”, which is also the last song of the demo.

At the beginning of 2012 came   to El Viajo Lohagougual  , the second album by the santacruceña band that, by that time, had managed to bring their music nothing less than Cosquín Rock, one of the musical festivals With 13 themes, Siete Venas continued to consolidate his work and spread it becoming references in Patagonian rock.

In 2014,   Aonikenk  saw the light, an album of 12 songs. Among the repertoire, the cover of " Cacique Yatel”, by  Hugo Giménez Agüero   was snapped in a respectful version of the Siete Venas style to honor the remembered singer who took Santa Cruz as his place in the world.

Vivo en Patagonia   was recorded in one of Siete Venas' classic year-end recitals. In it you can appreciate the intensity, party and sound quality of the santacruceña band. This album was released in 2016 and three years later, in 2019   Poderstars  arrived.

With your music everywhere

In addition to two performances at  Cosquín Rock  in 2009 and 2010, Siete Venas made different tours to present his record material, as well as performing at different events such as  the National  Trekking  Festival or the International Boulder Festival, in the city where they were born.

In addition, El Chaltén's band brought their music to Europe in 2017, when they performed performances in Germany and Austria. This year Siete Veas also had plans to run in the old continent, but the coronavirus truncated the plans, although it will be pending for another time. With contagious and catchy music, Siete Veas is filling   Patagonia   with its rhythm.

A highly recommended band, which shows us that in the south the musical spectrum is not reduced to   kaani  or  loncomeo  , but has a more than varied offer.