Roberto Grela and Edmundo Rivero, two emblems of tango and milonga, were also protagonists of a curious anecdote. 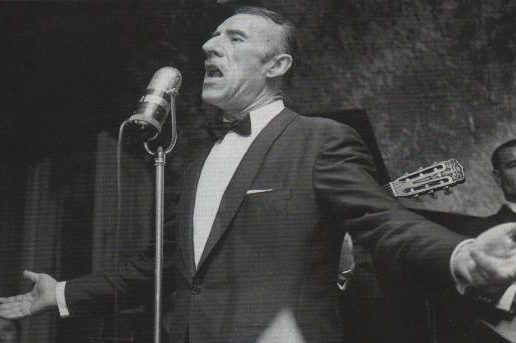 Roberto Grela and Edmundo Rivero, two emblems of tango and milonga, were also protagonists of a curious anecdote back in the 1980s in which they demonstrated their passion for turf.
It happened on a sunset in June 1983. Cold, fog and even a few drops from the sky. Grela was next to Rivero in the Paddock stand waiting for the start of the ninth race at the Hippodrome of Palermo.

The two remained silent, looking at the gateras for a 1,400 meter test. Neither one spoke a word.
Twelve horses ran, one of which came from Rosario, a city where there were very good specimens from the short distance. The jockey was Oscar Zapata, a prolique pilot who in those days won often.
Grela made a duet with Anibal Troilo on a historical record for the enormous quality of the two to interpret the traditional tango. He also made a super original version of the tango “Las Cuenta”, by Francisco Gorrindo. Rivero gave him the voice and it was a devastating success.
Grela was born in the neighborhood of San Telmo and died on September 6, 1992 at the age of 79. He was the last great guitarist of tango. Rivero, his friend, was born in the neighborhood of Valentín Alsina in Buenos Aires and died on 18 January 1986, at the age of 74. Two heroes of a very popular tango in those years.


Both watched the start of that race that won Soleado at 20 pesos, after coming from behind, run over in the last 300 meters to enter the record before the cries of a Grela who when he saw him define said to his friend: “Shout it Edmundo; he doesn't lose any more”. And so it was.
When the horse crossed the disc, Rivero moved his big hands and hugged Grela, who with the magazine Palermo Rosa in his hand kept hitting his legs. “With the time he had done in the last one, he couldn't stop winning,” Edmundo slid to find some logic for that great success.


The two, after seeing the horse's return to the weighing, drove towards the collection windows. Both of you without speaking, very quiet and waiting for the crucial moment to come. Grela came to collect, grabbed the money, took two steps to the side and stood against the wall to split with Rivero.
“ With this we are going to have a good wine tonight,” Rivero said and Grela replied, “With this Edmundo, I buy five guitars from the faces.”
One and the other passed through the Paris confectionery shop at the Paddock and then headed towards the taxi queue.
From there to the bowling alley “El Viejo Almacén”, owned by Rivero and through which the best exponents of the rhythm of “2x4" passed.


Like every night, Rivero and Grela went up to the stage to sing to a lot of Brazilian tourists. Rivero started with “Viejo Baldío” and Grela made the first chords. Then came several tangos in lunfardo to provoke a great emotion with “Las Cuenta”.
From turf to tango, from tango to turf. A cocktail that worked very well for those years of a Buenos Aires, with air to neighborhood. When Grela made the first tones to enter the tango “Sur” by Troilo and Homero Manzi, the ovation came in advance. A hymn that Rivero's version immortalized.


The anecdote of this little story was heard, seen and lived by the unforgettable comedian Marcos Zucker, who years later told it as if it were a little script for the radio. Zucker, a law burrero, had a thousand anecdotes from the racecourse.

“Stamp the world”, an exhibition of Argentine illustrators is on display at Cultural Recoleta
He already has 50,000 almanacs in his pocket.
7 tips to spend less energy at home
Argentine artists who make works inspired by meteorites exhibit in Vienna
Presented the first Argentine beer with desalinated seawater
Beirro
Calling FIFA
Curiosities of the date