The voice of the monchos, mensú and harvesters of the jungle and the coast, Ramón Ayala is painting and poetry made Latin American song. At 94 years old he presents a new album and republishes a fundamental book on war crimes. 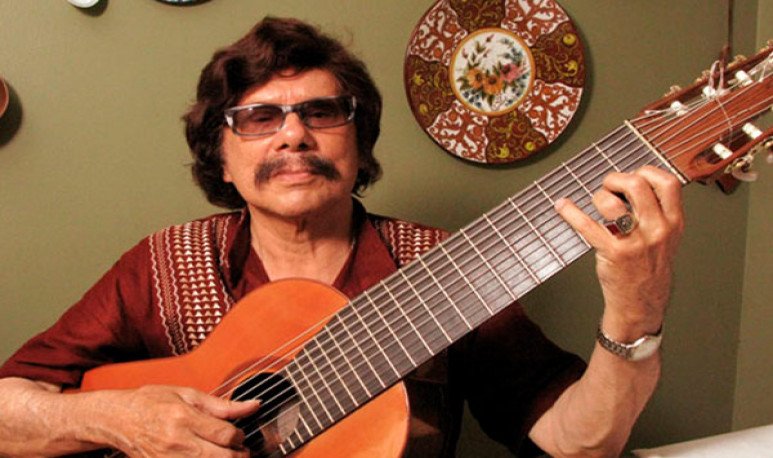 “I always wear that light of Misiones, that light that develops in me and manifests itself in that inner symbiosis that makes me a little painter and musician”, singer-songwriter Ramón Ayala presented in 1980   in the newspaper Territorio de Posadas, an artist who at that time was already a legend of the New Folkloric Songbook,   Mercedes Sosa   and Ramona Galarza did not stop singing “El coechero” or “El mensú”, as today Los Nocheros lash with “Look at me again”, and he added, “Because, somehow, the ability to capture shape and light, and arrange them, elaborate them on a rectangle, is the same capacity as leads me, for example, to spread the landscape on a song, and to feel it, and love it,” the composer of the official song of the capital of his province, “Posadeña linda”   In 2021 he reissued “The Burning Trenches of Paraguay. Popular song about the Great War”, an epic poem at the height of the Song of mio Cid or Martín Fierro, and tells in tenths the story of the War of the Triple Alliance against   Paraguay,   or Guasú War (Great in Guarani). As if it were little to his lozanos 94 years also releases “Monte Adentro” on the day of his birthday, the unreleased recordings recovered, and which includes the first recording of “El Gualambao”, song that represents the birth of a rhythm created by the musician at the end of the fifties, and recently declared Cultural Heritage of Misiones “The poet is a consequence of the astonishment produced by the elements and the magic that surrounds him,” Ayala tells this journalist, in the amazement twinned by a deep country of red and green, dreams of hopes and loves.

Ramón Gumercindo Cidade, known as Ramón Ayala, was born in Garupá on March 10, 1927, a town fifteen kilometers from Posadas, Misiones. Son of a baker, and Argentine consul in Brazil, his childhood is spent in a timeless environment, full of passwords of his future life, “I was born in Villa Urquiza,” he remembered, in a house on Rademacher Avenue that belonged to Grau, a former baker...   It was a house full of goblins, the ones they called “amazed.”   So, after my father's death, my mother and some friends... were digging at night trying to find those mysteries that somehow earth and night treasure. In that house, suddenly, lights appeared, or when we weren't there, a dog barked in an unfortunate way, or in the kitchen, brick floor and tiled roofs like the whole house, a big fogarada was formed... the funds gave to the funds of an Ayala family, who came in the evenings -the origin of his surname art. iacute; stico... I remember the fears about that house full of elves.   I think that has conditioned my soul, for that interest in mystery to appear   ”, ends off the age that also starts drawing on notebooks, and rips a rambless guitar bought from a neighbor “who didn't treat her well and washed it in a pool with soap and water.” Ramón if he would treat her well, moved to the Dock Sud, province of Buenos Aires, with his five brothers, and in the accompaniment of his brother Vicente's violin, would soon unrake Guaraní songs with his particular baritone voice. At the age of 17 he performed on Radio Rivadavia with bandoneonist Damasio Esquivel, and in the mythical “Palermo Palace”, with Emilio Biggi and Valerio Escobar, who would enter the reddish sounds of Alto Paraná   . With the famous Margarita Palacios toured the country from end to end, with less than twenty years old, and “I learned to love our land”, confesses the musician who never left the Argentine routes   .   And its people   . The 1950s surprises him with the folkloric event of the Trio Sánchez-Monges-Ayala, very summoning on dance courts and live auditions, and the one who left in full popular furor,”   I understood that art is not only to wear a tuxedo or colorful suit, and make up and go out and do virtuosity with guitar, when I realized that art is life and that song is a wonderful vehicle for man's expression and that it is cultural heritage of the people”   At the same time he exhibited the first paintings in the Stimulus Society of Fine Arts, the kickoff of a plastic trajectory of more than half a century in the main cultural centers of the world. Museums in Argentina, Bolivia, Paraguay and Spain own works   “Climb the jungle full of shadows and goblins to explode in thousands of green and red tones in Ayala's hands, and the painted jungle transforms into legend,” appears in the catalogue of his latest exhibition, at the José Hernández Popular Art Museum, in 2017.

With the backs of eternal compositions in gallop,   chamame,   missionary chotis, double rips and zamba, “Canto al Rio Uruguay”, “My little love”,   “Song of the Iguazu” that expresses “Look at me well, old Iguazu, /I know you're not a postal/your sloped solety/yells at me፦ Litoral!   or “El Jangadero”, success of Los Chalchaleros, comes the event of “Monte Adentro”.   That theme presents in society an original rhythm of Ayala born from the Creole and indigenous mixtures, European and African-American, greenish, brown and colorado, gualambao, “is a rhythm of twelve by eight, with a permanent syncopa, inspired by a popular instrument from Brazil plus the Guaraní tacuarazú and mimby, and represents the magic of the missionary mountain - which I thought did not have an expression that captured - the mystery of the jumps of the Moconá, where the river falls, on a whim of geography, not forward, but towards the side”   And if music smells like wet earth and tropical landscape, the lyrics talk about   Homeland   , “And on the mountain the bellbird/sings, dream/the grief of the indio/looking for his old country/And on mount el pajaro bella/it is a party/and here in my heart/what feels your pain/your eyes lands become love”. Sun of freedom in the voice of Ramón.

From the mid-1960s to almost the late seventies he embarks on an endless tour of Spain, Sweden, France, Italy, Romania, Cyprus, Uganda, Kenya, Tanzania, Lebanon, Turkey, Kuwait Iraq, the islands of pearl fishermen in the Persian Gulf! , Iran, Persepolis, Kurdistan, Bahrain and other countries in the Middle East. All he wore was his “mensu” outfit, the guitar, his sketchbook and the paintings left in each port, those missionary glare,”   I am the culprit of many of the Argentine songs within Latin American folklore - I recognized a Spanish journalist in 1970 - but my biggest prize was when an axero del monte told me “you are one of ours, perhaps the first missionary to sing what we dream” In homage to his village, one of the streams of Iguazu was baptized Ramón Ayala in 1985.

Figure of countless festivals and popular festivals from La Quiaca to Ushuaia, Ayala has published several albums from the two thousand, among the last “Entraña missionera”, “Testimonial 1” and “Cosechero” Honoris Causa Doctor of the National University of Misiones, Personality of Culture of the University of Buenos Aires, SADAIC Grand Prix and UNESCO Distinction for the Development of Culture,   in recent years his huge musical production of more than 300 songs deserved a strong revaluation by artists of all genres, where the 2013 documentary by photographer and visual artist Marcos López was highlighted. There are also several recent publications of poems, narrations and reflections, among them the essential “Desde la junva y el río” (Roberto Vera Editor), and who in 2021 returns with “Las trencheras ardentes del Paraguay. Popular song about the Great War”,   originally edited by the Ministry of Culture of Nation in 2015, a monumental popular song between history and oral, personal and collective memory, which unfolds circumstances and lives that due to”   arterial intelligence/from three nations on the march, hidden in masks/sowed death and misery” In four verses Ayala explains the conflict, and Latin American meaning, which annihilated half of Paraguay's population between 1864 and 1870.

Another Paraguay of music and dawn

“Ramón Ayala shows in this book the infinite human dimensions in the face of adversities, the lavish balance of spirits who suddenly discover their destiny without borders, the luminous horizon of life. Equity in the face of reproach is then presented as a huge scale corroded by time,” says Carlos Splausky's prologue of the new edition of “The burning trenches of Paraguay. Popular song about the Great War”, which takes up the memoirs of Ayala's mother, María Morel, daughter of a Paraguayan soldier refugee in Corrientes.   Within the tradition of orality and memory in Latin American literature, from Juan Rulfo to Héctor Tizón, Ayala finds the biographical scraps to link battles and soldiers in a picture full of stories from below.   This is how Marshal Solano López and Dominguito, Sarmiento's son, appear amid the bloody shrapnel of Curupaytí and Humaitá, without relegating the storyline of suffering, and tearing, of the families of Argentines and Paraguayans. And, in spite of everything, they refucate rafagas of light.

“I am the wind, eyes of infinity, horizon mouth, storm beard... may be my voice thunder, wheezing whisper, serpent of rancious voices, a belch from the abyss” tear the “Winds of War” from the first pages, and ends with the morning light, better   , “I know that I am going extinct/like day to night, /I also know that noble alma noble/-where once there were pawns-/the new savias will return/to fertilize new worlds... I love Paraguay and the whole America/In a single heartbeat of love”

They say about Ramón Ayala

“Because if the poet is not a chronicler, commentator or denunciation of the time he has to live, it would be only an expendable amusement. And it happens that poetry, like all art, is the main part, first line in the long struggle for the liberation of man. This means, precisely, the presence of Ramón Ayala in art”   Hamlet Lima Quintana in the prologue to From the jungle and the river. Buenos Aires: Roberto Vera Publisher 1986

When Ramon Ayala traveled to Cuba in the early 1960s, invited by the Cuban Institute of Friendship with Peoples, he had long encounters with Che Guevara. There they talked about the fantasies of the impenetrables and the open veins of Latin America. At one point, the hero of the Cuban Revolution, and official of Fidel Castro's regime, confesses to him that in the historic march started on January 1, 1959 from Sierra Maestra to Havana, the revolutionaries sang, in particular, their song to the pawn of the yerbatal: “El mensú”