The Aeropuertos Argentina 2000 orchestra is made up of young people from vulnerable neighborhoods. From their homes, they played the opera Cármen during the quarantine. 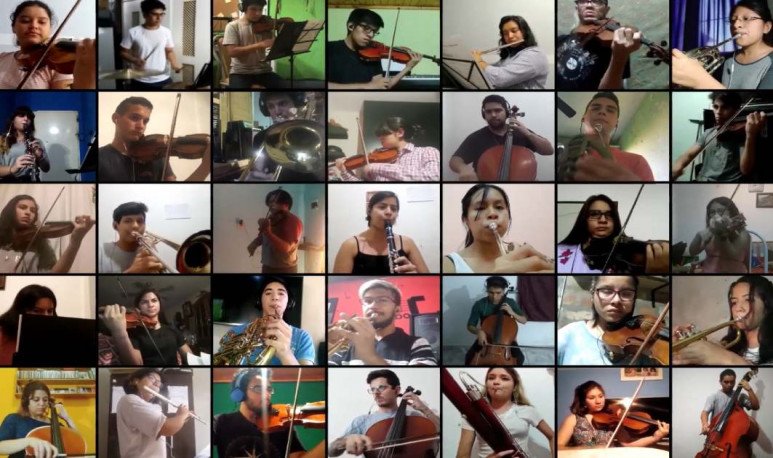 Against the difficulties, stigmas, all the “nos” they face since they were little, these guys are determined to fulfill their dreams. There are 41 young people between 15 and 23 years of age who make up the  youth orchestra of Aeropuertos Argentina 2000 . During the quarantine, they put together a video in which they play the prelude to George Bizet's  opera Cármen  . Everyone from home.

These young people live in different  vulnerable neighborhoods , on the outskirts of the City of Buenos Aires and the conurban area: Retiro, Villa Lugano, Balvanera, Mataderos, Villa Soldati, Bajo Flores and Ciudad Evita. But they have something in common:  they dream of professionally devoting themselves to music.  The orchestra was born in early 2016 as an initiative of entrepreneur  Eduardo Eurnekian . All its members are awarded scholarships in their artistic studies.

With the  mandatory quarantine  that governs throughout the country, it is not possible for them to join in testing. However, they continue to do so, as far as they can, from their homes. The director tells them slogans to practice and then gives them a return. So, in the distance, they continue with their studies.

In that context, the  idea of the video arose, which is not live or simultaneously, because the perfection required by the symphonic piece cannot stick to faults in the internet connection. So, each, with the help of a metronome, executed the piece. Then, thanks to a delicate editing work, each fragment was superimposed on the other, resulting in the perfect harmony that can be appreciated.

The edition was conducted by Alexander Pavlotzky, who is 23 years old and plays the trombone in the orchestra. He was in charge of synchronizing all the parts so that the fragment of the opera was without errors. For many, recording the video was not easy:  some share a small space with many people ; others do not find the necessary acoustic conditions in their neighborhoods.

That's why effort is valued even more. A beautifully executed opera piece from the most vulnerable places in Buenos Aires is really a work of art.