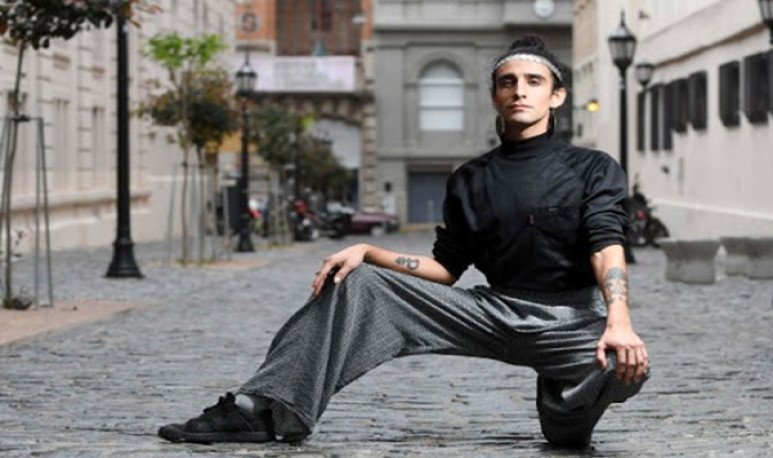 Cümelen Berti , today known as PAZ  (*) , is  queer , raperx, activist, musicx, DJ and Mapuche descendant.  He was born and raised in the village of Allen , in the province of  Río Negro , home to the National Festival of La Pera, a few kilometers from Cipoletti and the border with the city of Neuqué n (and obviously from the province too). There he participated in the choir, studied dances and theater and, already in high school, he perceived himself as PAZ.

His music articulates cumbia,  trap , reggaeton and funk carioca, with lyrics with social and political content.  He studied social psychology in Capital Federal, but then went on a backpackerx trip (in Argentina and Chile), with the idea of touring all the countries of the continent. However, he encountered a new love: music and peripheral culture of Brazil.  In Rio de Janeiro and Florianópolis, he began his musical journey,  which today is already recognized in the Sudaka,  non-binary , trans and self-managing environment. In the South American giant, he met “Cristo Reventón”, with whom he was recording music from a distance, unx in Brazil and another in the city of La Plata, combining Spanish, Portuguese and the original language, Mapudungun: thus was born the first EP Funk Art (2014).

PAZ   is a name that does not necessarily belong to some genre and is considered as a call for struggle and as an objective to unite people and the  public who see, listen and enjoy in the cultural spaces, marches and independent and self-managing premises where it is presented.  His shows are spaces of interpellation, activism, shelter for people and female and dissident identities.

Music not only as a claim and continuity of ancestral struggle, but as a tool for social transformation, in times where debates are about deconstructions and historical, social, cultural and musical resignifications. “Allowing ourselves to be feminine, in a world built for masculine to be in power, is revolutionary,” he repeats on several occasions.

With  Patagonia Emergente (2017), his first record album, gave way to his career to expand even more  in Argentina, with performances in La Plata, Capital Federal, Córdoba and also in R í or Negro and Neuquén, thus demonstrating the versatility necessary to plant themselves in different communities, celebrations and demonstrations. The Nge Nge (the  Mapuche  symbol of an eye to show and see souls) tattooed on his throat gives him closeness, perception and protection of the stage, space or territory where it is standing so that art and activism transcends, what to think, but also a dance for the culture of the people.

Although their collaborations are varied, they are also of Patagonian reference and independent environment, such as the Chubutenses Sara Hebe and Los Cheremeques, and their presence in events, as well as dissidents, institutional, for example, festivals organized by various women's collectives, cultural centers, centers of students and universities.

His non-binary body, originating, trava-fag and in continuous connection with music: “I see you in me, I see myself in you and so the transition begins”, he sings in “Transition”, while original instruments sound.  The articulation achieved between environments that often do not become compatible is part of novelty and historicity and experiences.  From the village of 30 thousand inhabitants to live in Capital, in the favela of Brazil, and find innumerable new styles of music that today manage to give volume to a historical struggle and often left aside: a few days after the premiere of their new material, DJ Set that articulates other dissident artists, you can affirm that  PAZ  is aware of ancestral modernization; and it goes for more.

( *) No value judgment is made on the correctness (or not) of the use of X, but the self-perception of PEACE which is not considered to be male or female is respected.