Sauce Viejo, folk village if any, has an illustrious singer-songwriter walking through its streets: Orlando Vera Cruz. 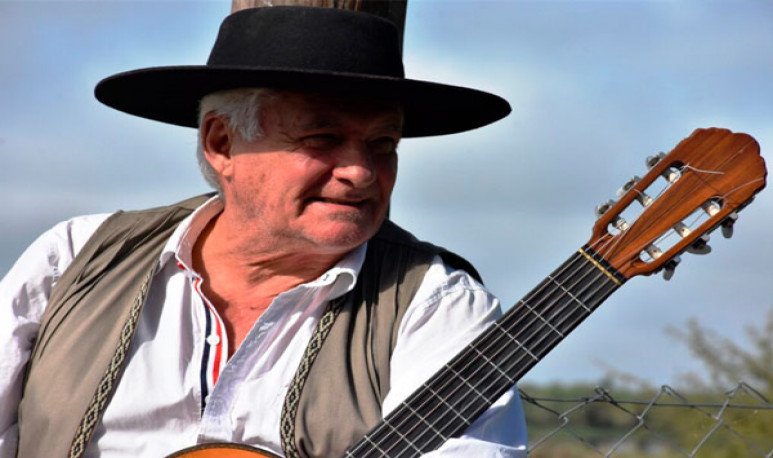 Orlando Vera Cruz was born in Santa Fe in 1944, with the name Orlando Luis Cayetano Pais. As a child he lived in Sao Tome, the town very close to Santa Fe, separated from it by the Salado River, but already adult adopted as his place of permanent residence  Sauce Viejo , village rural on the banks of the Coronda River.

In his childhood, he chose folk music, joining groups in which singing and guitar studies were offered. This awakens his vocation to investigate customs and customs of the coastal landscape and its inhabitants. But it can be said that  the artistic career takes a real flight to discover and interpret the work of Julio Migno , a poet of excellence in the folklore of the region. Orlando was 8 years old when he recited in the town square, riding his horse, the “Song to Freedom”.

Since then,  he is considered a true representative of the native singing of our province , with songs of his own authorship and Migno, who accompanied him sharing numerous stages.

In 1975 he released his first album entitled  Consagración Cosquín 1975 , which  includes one of his most widespread works: “Costera mi Costerita” , classic litoraleña.

His interest in the history of our province led him to dedicate himself to an exhaustive compilation of the milestones in the life of Brigadier Estanislao López,. Thus he created the  “cantata chronicle sung to Estanislao ” that was presented at the Paco Urondo Provincial Cultural Center. It was within the framework of the celebrations of the  bicentennial , with choir, symphony orchestra, renowned local soloists and dance body, all coordinated by a narrativeis in charge of prominent journalists. This cantata  was taken to the main stage of Cosquín , with the delegation of Santa Fe.

Many awards and recognitions obtained since he began his career by integrating the group Los Litoraleños with young people from his village, and then dedicating himself to singing as a soloist, since he considered that this allowed him to better express his social denunciation and true regionalism. These characteristics motivated  his career to be silenced during the military dictatorship . Prior to this period he received the Martín Fierro Award from A.P.T.R.A, Best Program of Cultural Interest Canal 13 in Santa Fe; Palmera de Plata Guadalupe; Gurisito de Bronca at the Paso del Salado Festival; in addition to many other distinctions. With the advent of democracy, return to stages and recordings, editing successes such as  Trudades ,  What will you have Pago,  Pilchas Gauchas , Provinciania, Heart of the river, Canto Santafesino, Bajo un Prizes and distinctions continued, such as Condor de  Plata Monumento de Cristal, illustrious visitor of Colón (Buenos Aires), Sao Tome, the Chamber of Deputies for their contribution to culture and the Senate of the Nation for identical motif.

From his quiet refuge in Sauce Viejo, Orlando Vera  Cruz continues in his career as a performer, also writing his own songs , carrying and keeping alive his love for the terroir, his history and the indelible mark left him by the creative spirit of Don Julio Migno.

The 2020 pandemic did not prevent Orlando from continuing to express his activity  as a great singer-songwriter. From the beginning, he was always active on  social networks  and virtual platforms, to share with his art with his followers.