On December 8, 2013, Metallica performed a historic recital in Antarctica. 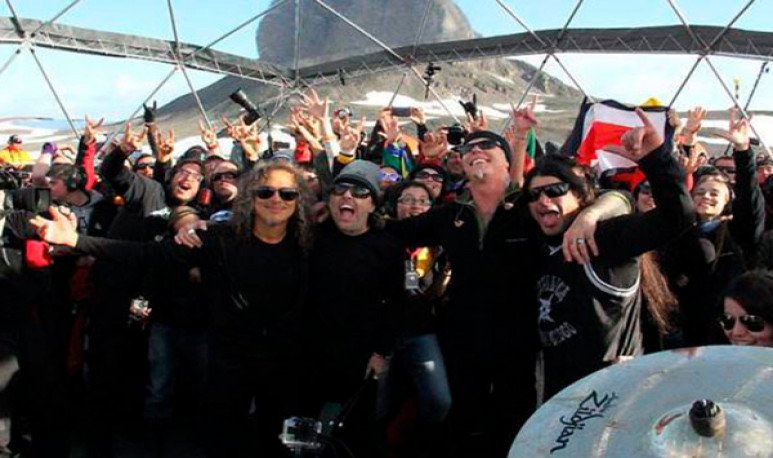 Musicians, bands, artists from the cultural sector in general seek not only to generate a visual impact on every concert and recital they offer. They also seek to ask and generate experiences to their fans and anyone who attends to listen to them, unfailingly of the mass or not of those present.  Metallica and  Antarctica  , were a single concept in 2013. Visionaries? We don't know yet.

The heavy metal band performed at the heliport of Carlini base, located on the 25 de Mayo island of the South Pole.  Few attendees, no amplifiers and only being heard by headphones so as not to interfere with the silent everyday life of  Antarctica . Above the Coca-Cola Zero cruise, they started with the show that allowed them to be crowned as the only band that has played on all continents.

December 8, 2013  will be marked forever: in a kind of advance to some current events, where only few people are present, without too much noise and with a lot of presence via     streaming , Metallica offered under the sponsorship of the American company, a totally different show, “silent”, since whoever pulled out the headphones would only listen to drummer Lars Ulrich, who also joked commenting that Antarctica is a “place far further south than I expected they are starting to discover.”

The production of this unusual presentation was long and carefully managed: a special geodesic dome shaped stage was built with a diameter of 15 meters and a height of 6.6 meters (plus smaller and auxiliary ones for video, audio and staff equipment). The shape of the structure was designed to withstand powerful winds and snow accumulations, everyday conditions in Antarctica; the show was recorded in HD through 16 cameras and broadcast it via streaming.

Another component to consider was electricity: since they did not want to use the energy of the site, the operation included the placement of four solar panels, second-generation biofuel was transported to power the base generator; in addition, in December there is about 16 hours of sunshine per day, so the vast majority of electricity was provided by the panels.

In addition, the laborious and particular protocol on environmental impact was supervised by the National Antarctic Directorate (DNA) of our country and in  accordance with the protocols of the Antá Treaty Attentive to the care of the environment .

The musicians were always respectful of where they were: in later statements, singer James Hetflied commented that they went to  Antarctica  “with beautiful and meaningful songs to raise awareness about this site” because “is something that must be preserved and not marketed,” added the leader of the band.

A public at the postpandemic

The audience was little but varied: the recitals of this historical band were always witnessed by thousands and thousands of people piled up and doing pogo, something that did not happen at this exceptional event 8 years ago: there were scientists residing from Uruguay, Chile, Poland, South Korea, Russia, Brazil and Germany, technicians from the entire assembly of the operation and 19 people selected from the company's competitions from five different Latin American countries: Argentina, Chile, Colombia, Costa Rica and Mexico, some journalists and ready.

The dome also muffled all subzero temperatures that could be seen at a simple view; the spectators were added native animals from the great white continent, such as skuas, also   penguins   and  elephants  that rested around this particular show.

The repercussions were positive and negative, as many people complained that they would alter the normality of the continent, in addition to the fact that the organization is a private company. However, those present, like Uruguayan base doctor Fanny Vieria, commented that “it is good to focus on Antarctica to protect a world heritage, a place of peace and science, where flags don't matter.”

For their part, the 19 selected were not only able to enjoy this unique show: for ten days they could talk and see the wonders of Antarctica, from their departure from the town of  Ushuaia, province of Tierra del Fuego Antarctica and South Atlantic Islands.

Continuing with the repercussions, the comments on the different online paltaforms soon appeared at all times, but among the outstanding post show was the “envy” of several fans for not being able to attend: “Blessed are the Polar Bears and Penguins who listened to Metallica” and “The White Continent she dressed in black to receive Metallica,” were just a few examples.

Almost two years after this particular event, the integrated band Hetfield,  Ulrich ,  Kirk Hammett and  Robert Trujillo , released the documentary of their time through the Ant artid:  Freeze 'em all . With a duration of 20 demonstrating how with ten songs it was possible to travel more than 30 years of musicians' history, the excitement of fans present offline and online and the behind the scenes of something as spectacular as unique in recent history and that, by many more years, it will remain: “Thank you for doing this great moment with us. Now you can tell your grandchildren that this was the most memorable concert of their lives! “he said after the Heatfield show.

Metallica is a memorable band for many reasons, for their career, for its members and because it represented a new sound that was spread all over the world and in December 2013 managed to reach the last continent that “was due”: the  Antarctica .