Estudio Coral Meridies is one of those vocal groups that excite, with a high level of performance. 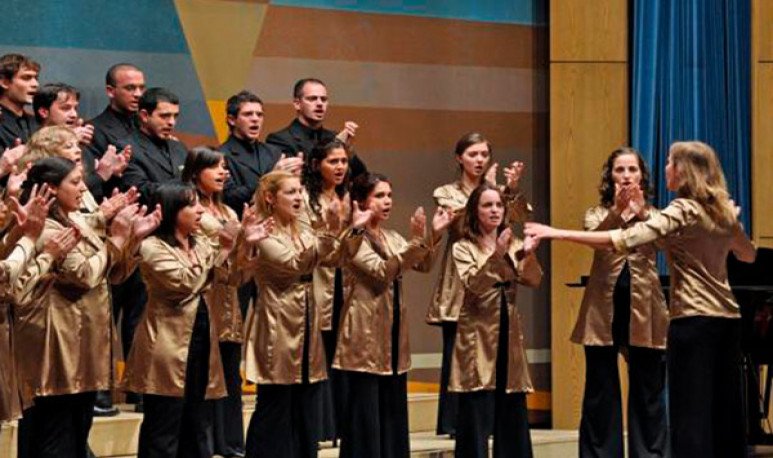 In the city of Santa Fe, a long and prestigious  choral tradition has been part of the cultural capital that makes it proud. Important musicians have directed many choral groups that have remained, and are still kept to date, providing performances of excellence.

The choreutes of only two of these choirs are rented , on the one hand those of the Provincial Polyphonic Choir, with more than fifty years of experience, and those of the Municipal Choir, of not very old creation. The others are purely vocational.

As a  “Vocational Choir”,  it is the economic effort of some cultural, union or neighborhood group that  faces the payment of salary to the director of the golfer  and, for the most part, it is the Koreutes themselves who contribute monthly for that purpose. There are also current expenses such as scores, accompanying instruments,  transfers to locations outside the city, to which they are invited to participate in recitals and contests , which is why the members and the director themselves organize events and contribution vouchers, to collect the necessary.

In this last category of vocational choir, the  Estudio Choral Meridies emerged in 2004 as an independent artistic group, a name that represents the South of the continent.  Its creator is Professor Virginia Bono, with a recognized national and international career  and the members are non-professional singers, music students, choir directors, solo singers and other choral groups in the city.

With an exquisite style, a particular sound and great musicality, Meridies  approaches a complex and intensive universal repertoire , giving preference to the premiere of contemporary works by Argentine and Latin American authors. It has three records and is currently dedicated to the production of a CD with the choral work of  Carlos Guastavino.

Why are they so good?

We are certainly in a position to affirm that this Choir is one of the best ambassadors of Argentine and South American choral music. This justifies the fact that  he has masterfully presented his performances on stages in our country and in various parts of the world . He did so by participating in competitions in which he has been  distinguished with important prizes,  such as those listed below:

Venado Tuerto , Argentina; prize for  the choir most voted by the public , year 2006

This is, then, another “dilect son” of Santa Fe, who since his vocational status has managed to be ovated by the public and recognized worldwide  as an excellent performer of choral music of all times.