On the day of her birthday, we remember the story of one of the highest references in Argentine folklore: Martha de los Ríos de our beloved Santiago... 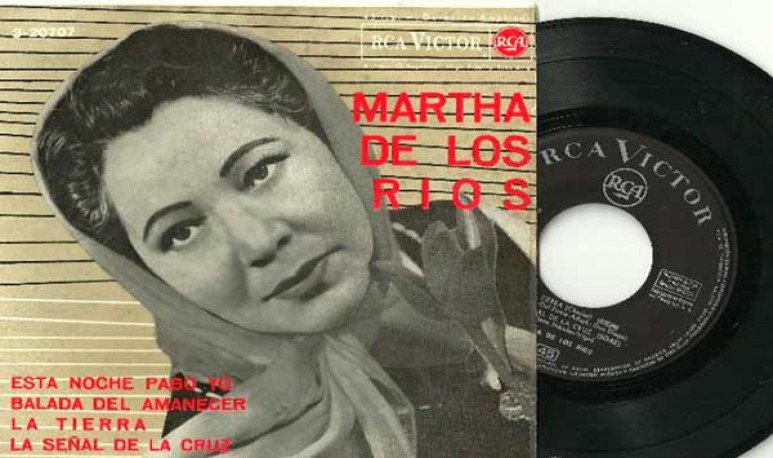 In the confines of the Argentine province of Santiago del Estero , located in the semi-arid plains of Gran Chaco, in the lands of the Termas de Rio Hondo, a hope was born.  A hope of name Martha and surname of Los Rios , which would set the rhythm of folk traditions and  Argentine folklore . Her real name was  Marta Inés Gutiérrez de Vargas  and was born on a day like today, April 15, 1906. From the beginning she consolidated herself as a renowned artist. And, little by little,  he won the hearts of the faithful folklore lovers.

Beginnings of a big wave

He began in 1931 as a tango singer.   Despite her  contralto record,  Martha de los Ríos chose the path of  popular genres.  That year he made his radio debut as a tango singer and then  devoted to northern folk music . He performed with the group Los Trovadores, with which it reached a  wide spread throughout Latin America.   In the 1950s  she sang accompanied by her son  Waldo de los Ríos. Among the songs he performed are especially remembered “Llorando stoy”, “Huachitorito” and “La Shalaca”.

He was coping the radios and, like a raging river, he overflowed the stages with his melodies and compositions . This woman was  an outstanding singer of folk music  from Argentina , recognized nationally and consolidated as an ancestral symbol.   Martha de los Ríos is considered  one of the five most important singers in the history of folk music.   At the height of Mercedes Sosa, Marián Farías Gómez, Suma Paz and Ramona Galarza.

In 1985 , for his great performance, he received the diploma of Merit from the Konex Awards, recognized in the national music field and of great prestige. This recognition was given as  one of the best.   He also dabbed cinema, starred in the films  Oil  (1940), Alla  en el Norte  (1970) and  El canto tells its story  (1976). But his passage through the big screen did not become as deep as  his expedition in the field  of folklore.

Martha de los Rios was a single mother . His son Osvaldo Nicolás Ferrara, who would later adopt the nickname Waldo de los Ríos with which he would become famous, was born on September 7 in Buenos Aires.   She raised him alone and fought as a single mother,  taking him, next to her,  on the path of musical success.  The creature's father, Nicolás Ferrara, was a guitarist, but he never wanted to marry  the renowned artist , early leaving the home they had consolidated.

Walter's childhood passed under maternal authority. Since a teenager he was  driven to follow the rhythm of music and to train as an artist.   Until he became a  gifted pianist from a teenager  , who  always accompanied his  mother's performances.

Of melodies and tragedies

On March 28, 1977 Waldo de los Ríos committed suicide with a shotgun in his head  at his home in Madrid, Spain. At that time, she was prostrate because of health problems. But, with the strength that characterized her , she claimed and fought for her son's remains to be brought  to her home country. The remains of Waldo de los Ríos rest  in the Buenos Aires cemetery of La Chacarita,  in a garden called  “The unforgettable”.

26 years ago, on January 13, 1995, her  death also hit  her. Taking it hard and without arrest, the  only thing  that would never stop would be the melodies that came out of his mind, revolutionizing the popular music scene.