Luisa Calumil has been raising the voice of the native peoples for more than 45 years. 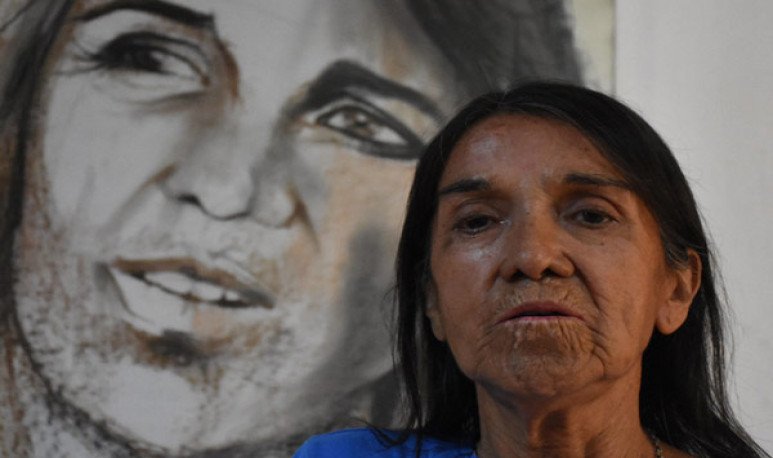 Luisa Calmumil  is one of the great personalities who narrate  Patagonian  identity and culture and especially the people  Mapuche .Born in  General Roca ,  Río Negro  , the actress, writer and popular singer carries dé cades spreading with their art the identity of the original peoples not only in our country, but also abroad.

Her passion for art began as a child: already at school she sang, danced and recited, while at home she heard her mother and grandfather sing in   Mapuche   language; she loved it too.to see women singing and playing instruments.

Perhaps a crucial moment in her life as an artist was when she began to sing as a child to stop a staunch. Everything calmed down and the participants of the quarrel became spectators of Luisa, who came out of the soul to do that, and decided to continue along that path.

With a lot of willingness and commitment while studying art and from there he began his career as  an independent artist , seeking to spread the southern Mapuche identity, also taking inspiration from peasant roots artists from abroad.  Aimé Painé , the first recognized Mapuche singer, also influenced her life, who “ripped off her gag and encouraged herself with her wonderful voice to revitalize and promote our culture,” said   rionegrina   in an interview.

In his extensive career, he participated in various plays as well as films. He also recorded his voice on music, although the only official material dates back to 2010, when he released with Jorge Morales, his son Marcelo García Calumil on percussion and Pedro Ríos on accordion the album  La Cantora , which was nominated for the  Gardel Awards .

With sun-tanned skin and hands marked by work, Luisa walks the paths her testimony of life and that of her people, with the commitment not to silence or hide her origin, of which she feels more than proud.

That pride of origin led her to write her own projects, when she began to feel that her belonging was silent . This was how he encouraged, with the support of his people, to reflect the view of the Mapuche people in their artistic interventions. It was in this way that “It is good to look in your shadow”, “Soul of corn”, “Echoes of the people of the earth” and “La tropilla de Ruperto”, all of them created and acted by Louise herself.

His passage through cinema also did not go unnoticed and in 1986, with “Gerónima”, came his debut and consecration on the big screen.Then came “Love to America”, “Son of the river”, “The nave of the crazy”, “Without wanting”, “Far from the sun” and”The cry in the blood” and “Aimé”, which was projected in 2018, demonstrating that it is still valid.

And, if we speak, the artist commented that her health began to prevent her from being on stage at 75 years, but she continues to promote popular and independent theater with three young people from General Roca, who invited her to write and direct, which she considered “a grand prize“.

The multifaceted talent that led her to perform, write and sing is recognized in different parts of the world. Singing and narrating the passage of his people, the Mapuche identity and raising the voice of  Patagonia , Luis Calcumil is one of the unavoidable references of the culture of the original peoples.

Recently, the roquense received the Career Award awarded by the  National Arts Fund   because “her message is a witness to life, with the commitment not to silence their origin or identity”. A more than deserved recognition.