With talent and will, Marce Sangiao makes his way in the world of music. 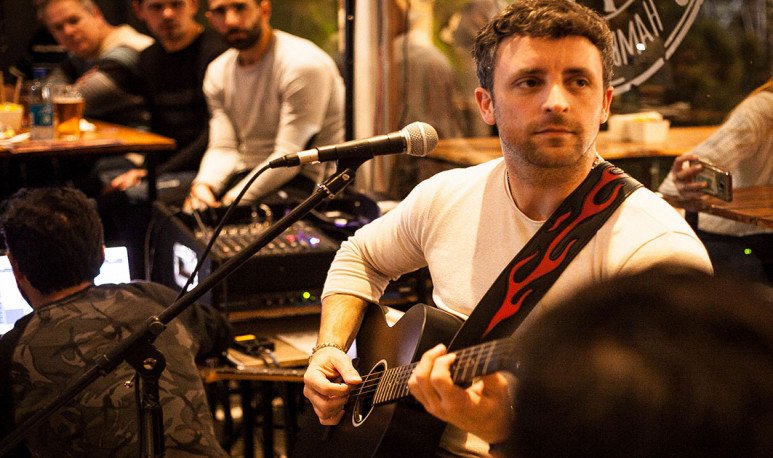 How many of us have put aside what we always wanted to do out of fear or insecurity? How many times did stability weigh more than dreams? We live prioritizing what is not the most important thing, clinging with nails and teeth to a reality that is comfortable for us, but that does not make us happy. How about one day we kick the board? What if it goes well?  Marce Sangiao  asked himself that question a few years ago and he has a word to summarize that key moment in his life, the turning point, when everything that until then only echoed within him pushed him to begin the path that he finds today: Ikigai  .

Ikigai, in Japanese, means something like “that reason to wake up every morning.” The purpose .  His purpose had always been clear:  to live from music . Express themselves through music and share with anyone who wants to listen to the healing power of that art. But, for many years, such a desire was quiet inside him, very afraid to go outside.

Originally from  San Antonio de Padua , in the west of Buenos Aires, from childhood Marce had felt a connection with music and his most beloved instrument: the  guitar . In 1998, as an early birthday present, his parents enrolled him in guitar lessons with a great professional:  Gabriel Maccioco , member of the Fantasy Duo. With him he learned chords, scales, scrapes and arrangements with the  guitar , and also that passion for the music they shared. The following year,  he brought to his teacher the first song he had written.In front of him he was not ashamed to sing, but — when the audience was another — his fears returned .  Instead, as a placebo, his ability to play guitar, to arpeggiate songs would grow. Kind of like letting the guitar sing for him.

A few years later, in 2013, Marce received a very special visit. His friend, musician, pianist and producer,  Juan Carlos Cambas , came to greet him after 10 years. He urged him not to give up without doing everything he had to do to make the leap he so longed for. They took a photo, which Juan Carlos shared in his networks:  “With a  talent , although he doesn't know it”.Thus, without realizing it, he gave him the subtle touch that Marce needed to sow this idea that began to take root :   “I can be that great musician who dreamed of being a child”.

In 2015, the second and final push came.  Rafa was born, his son.Far from directing him to seek a more stable and secure life, the birth of his firstborn confirmed more than ever that he had to fight for what he wanted .  He wanted to give him the example that, whatever happens, whatever it may be, he was going to go ahead for his dreams.

The beginning of a great dream

2018 was the hinge year in his career. A great friend who had opened a bar recently invited him to show up at his place.  Two days later, I was playing live for the first time.Then, he met Javier Barreto , who would help him record the three albums that today are a reality .  He took his songs and made arrangements to begin recording, in July of that year, his first studio songs.

Today, with some plans stopped by the pandemic,  Marce Sangiao  finds himself composing new songs, taking singing lessons, performing classes, reviewing and arranging the songs on the album  Oho!for live performances, taking piano lessons .  He is also showing up — through his Instagram account  @_BeMusic — every other Saturday, in a cycle called #Fogon #EnVivo #EnCasa. There he sings his songs and some cover, with guests and surprises.

I write as I live. With a passionate romanticism that for many years I tried to unfold from a dropper. For many years I came to think that my “romantic” idea of life and things that happened to me was out of time and space.

And it was very but very recently that I could realize that it was not bad and that, in fact, it was very good for me! I realized that, as I see, listen and feel life, with its chiaroscuro, in that super-complex ying and yang, is the way I want to live it, being myself, being who I am.

In my songs you will be able to listen to emotions full of skin, of all colors, in varied musical styles, with different tones, major and minor, with different flavors, more always full of feelings.

I think my music paints me whole body and soul. If you listen carefully to my songs, you're going to have in your hands a map where you can meet myself from end to end.

Let's be music. Let's be Magic. Be Music.