Everyone remembers how he rocked with his students Jack Black in his film “School of Rock”. We tell you about missionary children who learn to rock. 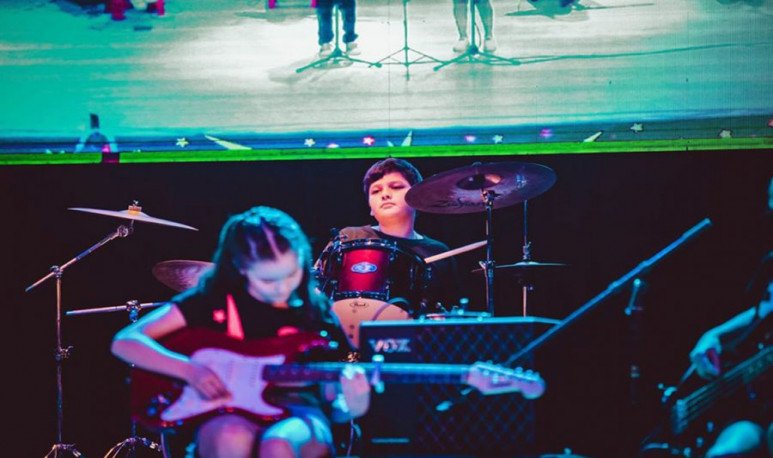 School of Rock was a clearly fictional film, but it showed us what rocking really means   . Not only from the musical point of view, but in the human. Perhaps missionary children have not seen the film, however, in the red earth it rocks the same.

Let us briefly recall the plot of this unforgettable film. Jack Black plays the role of a frustrated guitarist who is fired by his band. Because of his financial problems, he decides to impersonate as a music teacher in a prestigious school. In the film, the crazy teacher generates an ethical revolution in his students when he teaches them to rock.

But what is rocking? Certainly, it's much more than playing rock   . Rocking is playing with music, is getting out of the schemes a little. Something not easy to teach, but that the rock academies of Posadas are very clear. There, the taste for gender grows more day among children and teenagers. Missionary rock schools are the ideal place to unleash the guriss' crazy enthusiasm for music.

Grillos Rock is a pure rock and roll school, located in the capital of Misiones   . In 2019 he celebrated his first 10 years of existence. It currently hosts more than 170 students of music related to rock culture.

“Grillos Rock started in 2009 as a summer workshop,” said Professor Barrios Hermosa. “It was an exclusively rock-oriented workshop with guitar, bass, drums and singing. But due to the good impact it had, the annual classes were opened directly,” he added.

In Grillos Rock, everything that is the rock repertoire is practiced. The classics of Queen, Nirvana, Virus, Fito Paez and Charly Garcia. In the full class the guy spends his time with the instrument he chooses. During the year we work everything that is theory and technique, but always on one or two songs.   Half of the year the acoustic Grillos Rock is performed   , a unique event that offers the best of children's rock and roll in Misiones.

1- No one can tell you when to rock   . Professor Barrios Hermosa clarified that “we insist on classes with each guy to do something different. We all have our time, some students go much faster and others have their process a little slower.”

2- Nobody rocking alone   . Grillos Rock seeks to encourage fellowship and acceptance of the other. “That generates something that fascinates us about this work. What is seeing 17-year-old boys with all the good vibes with 8 others,” explained the teacher. It's just that, in the posadeña rock academy, although the classes are separate, they all end up living together inside the place.

3- Rocking is to keep playing   . The director of Grillos Rock said: “We tell students that making a mistake is part of what is going to happen to them on stage. What you need to know is what to do with it. For example, never stop, keep playing, not making faces, getting ahead of what happened. Then they naturalize the mistake, sometimes they go wrong live and laugh, and that makes everything healthier. I am very demanding in asking them to practice, but it is also important that they learn to live with error,” he concluded.