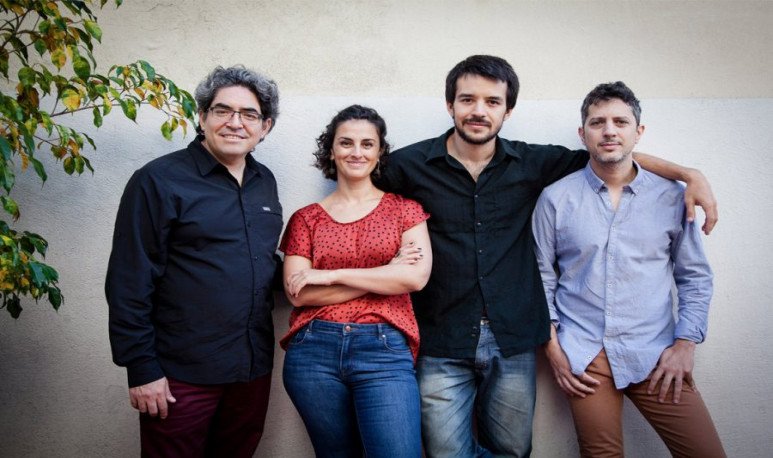 How did the intersection of Argentine and Latin American music with folkloric roots arise, in a format of camaristic sound?

Lucas Trosman: First, all Vuela Chiringa members have a good share of academic education. For varixs of us, they were our first musical studies. Fly Chiringa to explore Latin American music and search for their own identity that also contains the group's individualities.

Second, the particularity of the instrumentation that composes the group and arrangements of Santiago Torricelli, connect those universes between popular and academic, and at that junction we find our own sound.

Going to the title, what do you think epiphany is for the listener?

LT: We are aware that Tonadi would refer to “tonada” or there are those who think it is an invented concept. This cryptic side is most interesting, and we invite you to stay with its own sonority or musicality. Tonadí is a song by Sebastián Monk, whom we pay tribute to, and which summarizes the intersection between roots and contemporary.

How would they define the essence of Tonadi?

LT: Clearly speaking of “popular music with camaristic sound” identifies us well with our work. Tonadí has 11 songs, which include contemporary authors, others very busy, but perhaps not so much in those songs. And some more classic, challenged by our gaze.

Each theme has its own texture and concept, which we work very carefully. Giving a proper framework to that story we tell. We ask questions to each song, and she returns questions to us. In that encounter, this essence and identity appear.

More specifically, from the interpretative perspective, we make the most of our resources so that our rereading of these songs invite a new journey, exploiting timbre resources of each instrument and questioning roles that they generally play.

What led them to group in Vuela Chiringa?

LT: We met unx, for sharing stage or recordings. Silvia and Santiago sharing their solo projects. Rafa recorded on that first solo album by Silvia. And I met Santiago in a cycle I organized in Espacio Tucumán which I invited to play.

First we were summoned by musical affinity and desire to share a group project. Then we found a common north, which had to do with not only doing Argentine folklore, but thinking of ourselves as a Latin American music group of different times. Then everyone contributed their own, and there we consolidated and baptized “Fly Chiringa” at the end of 2016.

Do we need more institutional efforts to disseminate this kind of music they do?

This could be answered in several directions and several veneers. It's a topic that interests me and it inflates the veins a little.

Without a doubt, beyond the genre we choose to express ourselves, there is a lack of state policies that help sustain the production of independent music and art in general (and also include independent cultural spaces and the same public without which the message would be left. incomplete). There are different subsidies and calls, but they are for specific proposals. Policies are needed to provide continuity in the circulation of the public, and musicians through different independent spaces, which already exist and have been working steadily for years.

Specifically in Latin American music and Argentine folklore, today there is a global and neoliberal market logic. We are overexposed to commercial music, without any decision-making power. Knowing music of this kind, for those who do not know it, involves great research effort, because it is not at hand. And today, the culture of 'mobile applications' invites us to solve everything from bed and cell phone, not to look for new music and encourage us to go to a concert of a new group.

Likewise, it is not that I consider that the lack of institutional policies is guilty of all the ills that artists have to do with. We also have to do our own review. Generating large collectives with commitment to work, it is how cultural movements were made visible in the history of Argentine music. Individuality, today so at hand, and the famous 'artist's ego' go against these necessary encounters.

Perhaps, as a conclusion of the work we think, I say that carrying forward the production of an independent work of music, related to our roots, involves a lot of energy, and from now on, money. Thus, it is very necessary to be convinced of what one does.

The singer Leo Borrelli presents “From Back to the Clock”

A documentary about Camilo Carabajal, the bass drum and his ecological project is released