The famous rosarino singer-songwriter today celebrates a new onomastic, celebration that began in the last hours with several face-to-face recitals offered only with his piano. 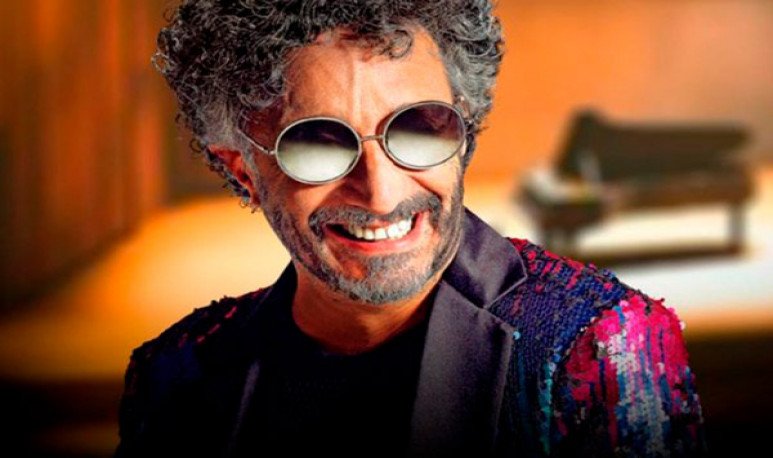 It won't be another Saturday, no doubt. When this evening Fito Paez meets with his loved ones without overstretching in the number of guests, there will be 58 little veils on a spectacular cake and the inescapable feeling of duty fulfilled, after several decades sowing various stylistic concepts conceived with great professionalism and passion. The day will be structurally, an appropriate pause in the middle of his first face-to-face recitals, four shows at the Teatro Colosseum that successfully started this last Thursday, shows that find him accompanied only by his piano and a huge immaculate repertoire.

Frustrating what should have been a big party with his fans at the Rosario Hippodrome in March 2020, he did not hide his nuisance when the city's authorities told him the impossibility of acting on that race field, an inevitable suspension when all public activities were canceled before the arrival of the pandemic. That episode without being able to materialize, disrupted at that point of the previous season the officialization of his last record “The conquest of space”. Without concealing his bronca, he turned that energy into a positive drive by developing a streaming recital from his home that broke records of connections, offered barely with his piano company and many timeless hits.

365 days after the historic presidential decree confirming the ASPO (preventive and obligatory social isolation), the musician decided to evoke that night in his Buenos Aires home and with the possibility of playing before his renewed followers, he scheduled several dates in a room that stores indelible memories of the best period of his career. The show “Un hombre con un piano”, the first event with public that started on Thursday 11 and will continue on March 17 and 18, takes place in the Teatro Coliseum, a beautiful room where the great songwriter officialized his exultant work “Ey! ”, project that closed a tetra edition of key works in his career published by the extinct company EMI Odeón Argentina.

The businessman Marcelo Fígoli, today turned into a renewed radio tycoon who continues to develop events with his company, was the producer of that historic recital that occurred 33 years ago, a concert that emerged fractionated on the Buenos Aires screen of America 2, recorded with the driver's mobile studio Johnny Allon. That night amidst a lot of classics, the composer of the “Chicago” Argentina advanced songs from an album that never saw the light called “Novela”, a never-filmed film script that showed people floating in Villa Gesell while the proto-rap “Jimmy Jimmy” sounded. 37 years from his debut film titled “Del '63”, material that broke sales records and even had a curious and sophisticated edition in “picture disc”, the author of huge musical jewels such as “A las Piedras de Bethlehem”, “Dancing until night goes & rdquo;, “Bode and Evelyn” or “Song of Love (meanwhile)”, has plenty of reasons to live with great pride a musical path full of very good works, most published before the new millennium. In the last decade, much of the national and international industry that had turned its back on legendary concept records, began a reconversion at accelerated speed awarding him with several awards, including several Grammy from the Latin context that caused his presence playing very followed in the United States and other parts of the continent very elusive in the past.

Playing with great orchestras from other countries, adding new pop bouquet figures to his compositions in the last five years and exhibiting a commendable enthusiasm amid his creative transformation, the artist showed to contracara other figures a powerful editorial energy, publishing in the period 2005-2020 an unused number of albums following its fruitful union with the Argentine subsidiary of Sony Music. Showing an interest in working without too many breaks between each publication released, backed by the label Javier Caso in his concept of constantly wielding new records and formats, the composer of immeasurable topaz such as “Hurried decisions”, “Cuervos en casa” or “Far de Berlí ; n”, he recorded in sophisticated studios around the world, after the failed experience of the studio “Circo Beat”, a place that did not resist the economic crisis of the menemate, today transformed into the “Romaphonic Studios”, without the magic or charisma of that recording complex. After the great album “Naturaleza Sangre”, published by the distributor DBN, her latest conceptual project referring to the singer's sentimental experiences, the aged composer and pianist showed an editorial versatility of enormous scale. So, after the publication of the DVD recorded live with the recitals in the Gran Rex of that work full of musical rubies, came a range of studio recordings that showed at that time the musician's conviction not to leave more in warehouses stored, all the tracks that I came out a buzzing out of his creative pen.

So came “Moda y pueblo” (2005), “El mundo fits in a song” (2006), “Rodolfo” (2007), “Confiá” (2010) and the unusual trilogy of “El sacrifico”, “Dreaming Rosario” and “Yo te amo”, a triptych of albums launched in 2013 that showed the author of “Clandestine Heart” strongly prolific in his editorial concept. In those years of great intensity came the albums “Rock and Roll Revolution” (2014), “Total Madness” (2015), “The Liberated City” (2017) and “Camino Sinuoso” (Original Sound Band), releases that the composer faded in the middle of many concerts outside the country and a growing recognition of his musical figure in the foreign music industry.

The relationship of the Rosarino artist with those followers who testified to his beginning back in 1984, with the presentation of “Del '63” in a crowded Astros theatre set as a large theatrical bath alluding to the cover of the album, had its breaking point in mid-2011. The audience who had given quorum to their historic recitals in places of traditional rock lineage such as the Obras or Luna Park stadiums, experienced a noticeable discomfort when the musician, the result of a nervous breakdown before an electoral result as opposed to his wishes, had no better idea than his desires. write a huge editorial in the contracara of a morning, declaring that “half of Buenos Aires disgust me.” Those statements that amplified on a potential scale as the controversy over his statements grew, fogoned a divorce from his historic audience, while the winning politician in that election, far from being bothered by the expressions emitted, came out to defend him opening up a new dito mantle of piety after that epithet that never had an official apology from the pianist. In the last decade, their shows were renewed by a much younger audience, very politicized and with limited knowledge of their discography of the old millennium.

A few years later, with the happiness of his children Martín and Margarita growing up in every aspect, that climate of emotional balance with all his family background including his previous partners, the musician decided to focus only on composing, publishing and performing shows of different scale, avoiding all contact with the specialized press, granting only notes to a well-known weekly show magazine or a few means of political alignment close to its volcanic feelings of the new millennium. It was so that his work, far from having the diffusion he deserved, was continued only by those who outside the pro-crack discussions were strictly interested in him as a musical composer.

Sharing compositions from his latest studio album “La conquista del espacio” with brand-new performers like Lali Espósito or Catriel, the Rosarino artist exhibits a well-deserved recognition of the continent in these seasons, while awaiting the imminent delivery of the Grammy Awards in the United States is highly valued for his latest record production. Without wasting time on his adrenaline agenda, he now occupies the last few weeks in the production of a tentatively miniseries called “Love After Love”, which will be known by the Netflix platform, an autobiographical work where he will travel much of his career with a huge executive production. Very happy 58 years for Rodolfo “Fito” Paez, talented Rosarino artist who forged a highly qualified musical path that will remain unalterable with the passage of generations.