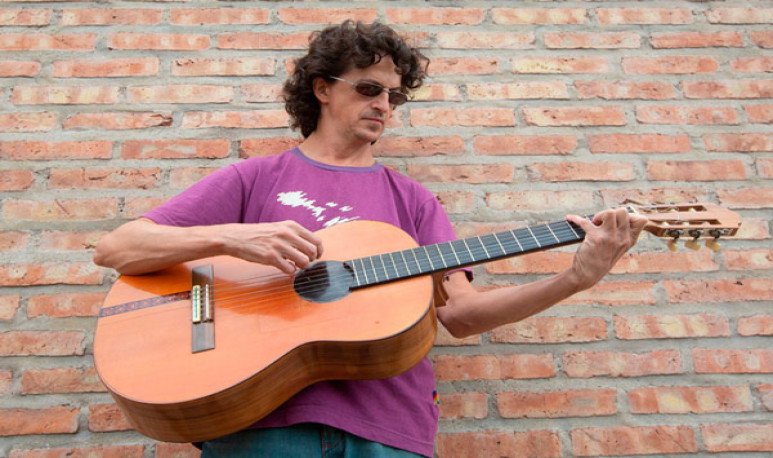 José Luis Álvarez presents his latest work, done in times of  quarantine  and  pandemic  : “La Canción Salvaje”  is his fourth record work and recalls experiences, landscapes and feelings; an invitation to the depths of the artist.

The musician was born in   General Roca ,  Rio Negro   (or Fiske Menuco, in Mapuzungun), and already in his teens he began to become interested in art, through radio and together with friends, playing   guitar   and singing Latin American and Argentine musicians, from rock to folklore and, too, troubadours.

So he begins to compose his own songs and play in small places, such as bars, peñas and popular festivities roquenses and nearby localities. Little by little, it's making its way into the regional scene.

He has just released an album of 13 songs, different among them but that are constantly intertwined and summarized in the title: “La Canción Salvaje”; metaphorical, trigger of ideas and feelings from which he was inspired and does it constantly. Some songs are recent, others have been written for five or six years: they are all from experiences “such as the excess of loneliness, a trip to the mountain range with a friend, my son's gaze, a night with music or the times I take my song to popular claims scenarios,” says the rock.

Its thread is the Patagonian region because all those moments (and people) are located in those landscapes, as varied and diverse as the music itself:  valleys ,  mountain range, sea ,  plateau ; although it also adds that more universal feelings, such as those that can be seen in the songs “Idiotized” or “Looks of Love”. Not only on this album, but in all the previous ones he does “songs  patagonicas ”: “Vivir para Cantarlo” (2002), “Todo began with my first guitar” and “Man traveler”, thus showing the social, historical and landscape cultural diversity that exists throughout the Argentine South.

On his website  , he defines this latest record work that took him more than a year and a half (between recording and mastering, all done in General Roca) as “Songs to keep believing in small and large revolutions that will once change this insensitive and frantic world, songs to travel within us to rescue the lost light, songs found by the lonely and dusty Patagonian routes.”

With regard to his presentations and meetings, which were slowed down by the pandemic and social health restrictions, he understands that small and medium festivals are where they are better understood and treated than in large ones; logic are different, since in the former, often, it is where they are more relaxed, “there is some cause or event that you are part of singing and the hosts value and know what you do, then they cover your expenses and strive to pay you a cachet that does not save your month, but it helps you and means an assessment for your craft,” says the musician. Unlike big festivals where “the regional musician is very unprotected, the treatment he receives is very different from that given to those who come from Buenos Aires or abroad”, as if they were stuffed or, as almost always happens, the previous to the great performance on the main stage of the famous artist . However, he clarifies that he learned that “you have to take advantage of these opportunities to show yourself, even if the context is adverse, you have to shield yourself, touch and keep fighting it.”

The relationship with other musicians through encounters has served as learning: from how to play alone or group, how to sing, how to compose and how to plan work in a recording studio to rehearsals and performances in various places with other artists.

Jose Luis can be found on digital platforms, like Youtube and his own website but he clarifies that “nothing replaces a hug, a look, a kiss, a mate or a shared beer, an artist singing on stage in front of you and vibrating with you, to that I want to return, when all this happens.”