Home Argentine Music Daniel Yaría: a rocker who rescues the Tango from guitars of the 20s

“We are not tangueros, we just like to play tangos” 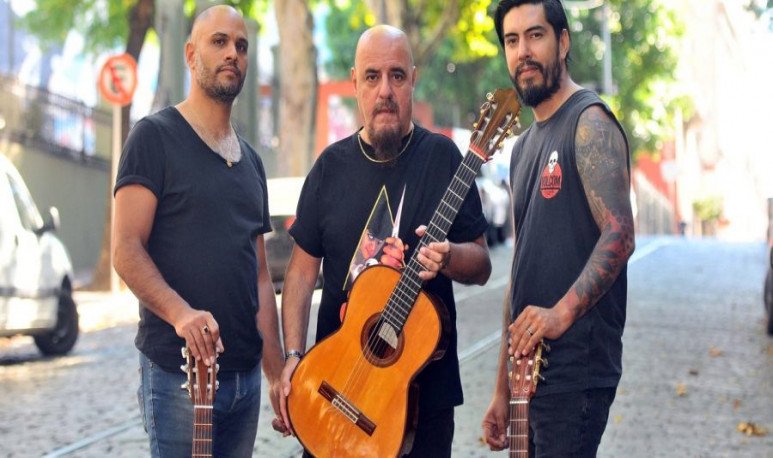 With a past in hard rock, with the band Magnum 44, which played the legendary Riff; and in the blues, starting with the Yaría Brothers, the band he shared with his brother Luis; musician Daniel Yaría has entered tango for several years, from a trio of guitars he heads and with the which deals with a repertoire linked to the sound tradition of the genre in the 1920s and 1930s.
“ We are not tangueros, we just like to play tangos,” says Yaría, who remarks in this way that the revision of that musical style has been faced since today and with a baggage that accounts for both his rock line and his aging in a home where tango was the everyday sound band.

Daniel Yaría and His Guitars are completed by Leonardo Quezada and Nicolás Pandolfelli, and features Claudia Bruna and Patricio da Rocha as guest singers.
With this formation, the group recorded “For you”, edited at the end of last year, a work that combines classics by Ignacio Corsini, Carlos Gardel, Agustín Magaldi and Francisco Canaro, among others, with their own compositions, which will be presented in the coming months in a theater Buenos Aires to confirm.
Although he claims that tango was always present in his life, Yaría placed his performance, at the beginning of this century, on the extinct television channel “Solo Tango” as the beginning of his professional activity in the genre, drawing the attention of Gustavo Santaolalla, who called him to accompany the Bajofondo group on a European tour.
Télam: You tell that tango was present at home as a child. Did he always keep that pleasure for the genre or was he hidden by rock and then came back?
Daniel Yaría: Tango was always present. Subconsciously, he always was. I was coming back from playing ball on the street and as I climbed the staircase from my house they sounded Corsini, Gardel. And while I was rock, he always played some tangos for me. He'd lock me up in my piece, grab the viola and play tangos.
T: It is often said that tango reaches a person when he reaches a certain age at maturity. Was there any time or event that brought you closer to the genre?
DY: I had a guitar master who was Antonio Cini, who played with Roberto Goyeneche and Nelly Omar, so some incidence is seen to have. But when he died, his wife asked me for help selling a guitars, and in thanks, he gave me a record player. That's where I started checking the records my old man had in a wardrobe. I started an almost frantic search and I realized I wanted to play that, besides rock. I think it's good to go to the root. There aren't many people doing that and it's necessary.
T: How do their own compositions dialogue with those works created almost a hundred years ago?
DY: I like that sound from the 20s or 30s to play, but the lyrics are current. You do it with the language you have. When I sit down and compose I get that musical style, which I have very incorporated, I don't have to think about it; but the lyrics have to do with my reality.
T: There is a lot of talk about the relationship between tango and blues but on aspects related to sentimental. What music connections do you find?
DY: There are many tango bars that are concatenated with blues. There are even rhythms that if accelerated are boogies. Another example, if you hear the beginning of “Nostalgia” looks like “Something” from The Beatles. I think all the music itself is always related, any style. It was all merging.
T: He had the opportunity to play in emblematic European theatres such as Royal Albert Hall in London. Did you feel an ambassador of our culture at that time?
DY: I didn't take it that way, but being there you realize what you are. They don't evaluate you there for what you say you are, but for what you do.