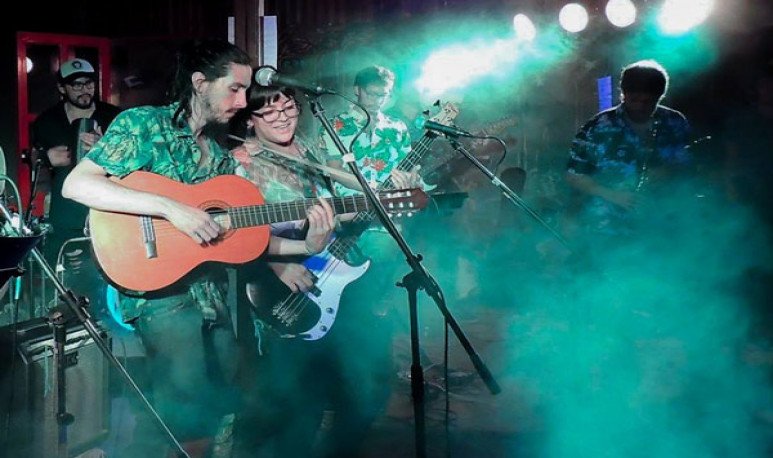 Cumbia  is the Latin genre par excellence and a fundamental part in the identity of the inhabitants of this part of the continent . The warmth of its rhythms and the freedom of their movements faithfully represent the idiosyncrasy of the Latino people. The variants or subgenres of cumbia range between   santafesina , tropical, villera, pop, emerging, peruana  and the most novel: cumbia pampeana (to dance all week). The precursors of this  style  are the members of the Orquesta Popular Barrilete , from General Pico, whom we interviewed.

Composition of the orchestra and origin

We are 18 beings: 14 musicians and 4 in technique, all being an essential part of the band.It's a big family, there are many siblings in the band and mothers and fathers always supporting.

The idea of the orchestra arises  taking as inspiration the Colombian cumbia, but with a lot of influence from the emerging cumbia of La Plata , since during the year many live there. Mixing these two styles, we form the cumbia pampeana, “to dance all week.”

Before the pandemic we started recording our first material, in a studio here in Pico, called La Hoguera Records. A pleasure to record there, very piola people who in a self-managing way and at all lung, do magic with the local bands. Now it's  all in the process of mixing, so we go into standby mode .

It will be only 4 themes, but very strong, and that will define well what we aim when we say “cumbia pampeana”.

What sense of belonging do they achieve in the band?

We take it as a great game, not only musical but visual, on stage, on the networks.  We are all children and we are with the necessary predisposition so that everything can work.

La Barrilete is not only responsible for making music, but is accompanied by many other things : we have our clothes made by an independent Pampean artist, designed garment by garment in a self-managing work. We look for this  reciprocity with other artists, contributing to us, creating a network.

What are they pointing to in the future?

Tour in the West

It was an important moment for the band and in each one's personal life:  playing on the  river Atuel  that was flowing again, even for a while. The entire west is a place suffered  for a long time, because  the river no longer passes with its natural channel; the ecosystem and life have been very affected  and the fact of sharing with the people of that land so suffered, getting the joy because the river has returned was something incredible andiacute; ble to live.

What did you feel playing for such a historical cause?

A mixture of emotions:  sadness, helplessness and joy . Do that tour, play in those villages, arrive and chat with the first people you crossed and ask for bars where to do the show... or the other  triumphal entrance: get with everything plugged in the van to the cry of “came the popular orchestra barrete, cumbia pampeana to dance all week”  and ahí see what magic came out. In Algarrobo del Águila, we were lucky enough to play on the riverbank for the people who were there. That experience then comes to be reflected in the sounds and aesthetics of everything we seek.