Few Argentine names identify both chamamé and Monchito Merlo. I knew his story. 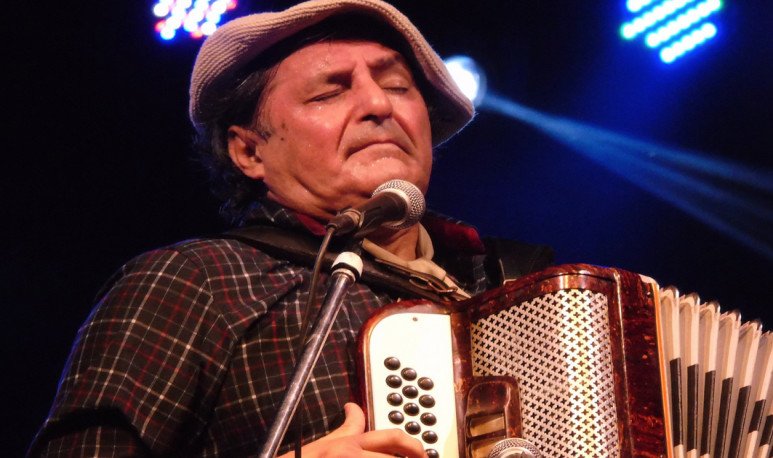 Monchito Merlo was born on January 19, 1954, in  Barrio Saladillo, the most Chamamecero neighborhood of Rosario.   Son of entrerrianos, his father Ramón Merlo and his Mom Emma Baez from Villa Constitución Santa Fe, move to Pueblo Nuevo, a neighbouring town of Rosario.

When he was 15 years old, he recorded his first full-length.   After four other recordings, already in 1982 he is hired by Polygram (11Cds). After that he recorded several other albums with numerous companies.

A chamamecero around the world

In 1998 I presented his work “Entre  chamamé y sapucay” in New York  at the festival organized by U.D.E.A (Union of Entities of Argentina). He reappeared in May and June 1999, at Gioconda Banquet May in Toronto,  Canada .

On the 18th and 20th of that month, he made his presentation at the public library in Quess, Jackson Heights and Flushing, and Saturday 22nd was the U.D.E.A special night as everything collected went to our country's border schools.

Monchito Merlo performed in December 1998 in Passo Fundo, Brazil. In January 1999 he performed at the Durazno Festival (Durazno-Uruguay).

What is said a prolific artist

Countless are the works (almost all of his authorship) that appear in his repertoire: “Paso lagoon”, “To get to San Javier”, “Zapateando”, “La Verbena”, “Gallopando por arrive”, “Tired eyes”,” Campereando”, “By the shortcut”, “You know” , “Failure” (together with Elpidio Herrera) etc.

In 2005  he filmed “CHAMAME”, a documentary with German production , under the direction of Nina Klingen and Cosima Lange where he tells the life and custom of Monchito Merlo, Chango Spasiuk, Gisela Méndez and Alberto Bofil. In this film you can see chamamé in its different styles, with Monchito being the most popular and campero with Horacio Guarany. Also Monchito's own children are seen in this film as special guests.

Then came “I doy sombra often”, entrerriana production filmed entirely in  Federal  that shows the national chamamé festival inside.

Finally, under the auspices of Culture of the province of Santa Fe,  a film called “La canción del lugar” was made  where he shows from the beginning to the present the life and career of Monchito Merlo.

When the blood pulls

Son of Ramón Merlo and Emma Baez, Monchito followed in  his father's footsteps to make music. He was a musician who shared his artistic days with Tarragó Ros , Ernesto Montiel and the grandes of the chamamé of the time. From his father he learned to play the accordion and the cadences of the Litoral came to him from his neighbors entrerrianos and Correntinos, who were then based in Pueblo Nuevo.

The artist, faithful to the family tradition, follows in his father's footsteps, honoring an artistic heritage that he carries forward with a genuine commitment he made to the folk art of his land.

An inheritance that moved, at least, one more generation.  Over time, Simon and Mauri arrived. Two of Monchito's sons who, as they could not be otherwise, grabbed the accordion from a very young age. They followed the example of his grandfather Ramón and his own father. The kids have been walking along the coastal roads that have already marked their ancestors.

They have also been part of many television music programs.