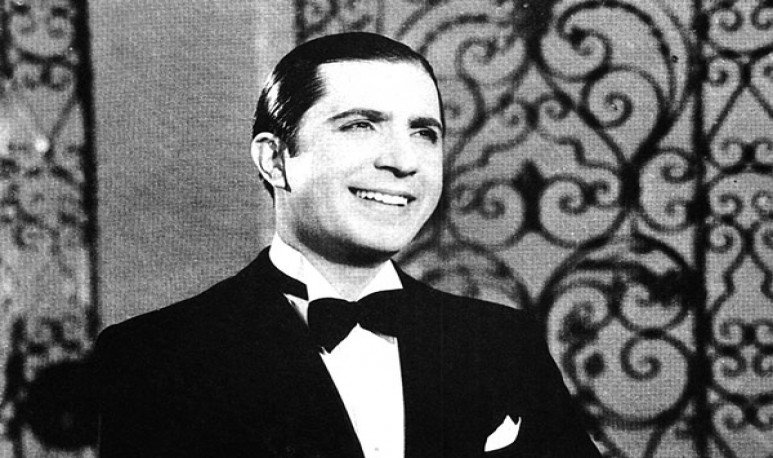 Carlos Gardel becomes an expression, and synthesis, of the arrival of the hamlet, of the Creole Malevaje “strange”, born in Buenos Aires in the lights of the Center. Tango will transform into an international romance with halls crowded by El Mudo in the main squares of the world, leaving — a little- the marginal reminiscences, while Carlitos progressively abandons the compadre's clothing for the frac.And the people, instead of rejecting it as their detractors wanted, accompany him because there was a hope, a promise that tomorrow would be better. The creole malón, in the pejorative eyes of the children well who were going to prove their virility in La Boca or Palermo, were the bearers of a music, a dance and a genuine language, and in an original, Argentinean way to see and feel life. And Gardel, every day singing better, wore the good news on the wings of immortality.

Within the Membrives company Carlos Gardel and José Razzano are presented in Montevideo, and with their Creole number grafted into a zarzuelas show. There he meets singer-songwriter Pascual Contursi in the cabaret Moulin Rouge, who makes him listen to one of his poems, “ Mi noche triste” , musicalized with a tango by Samuel Castriota, “Lita”  And exploits the Bing Bang del Tango-Song that still dominates citizen music  “The language of this poem, writes Edmundo Eichelbaum, was exactly the one that was dominated by Gardel, who was listening to as a boy and that he himself employed with absolute property. It was his mother tongue... and the stage was the conventillo where he had grown up”  Gardel transfigured popular feelings that took root in the dreams, passions and projects of a first generation of contemporary Creoles who asked to express themselves in their words and senses.

Manolita Poli with the orchestra of Roberto Firpo sang in May 1917 “Mi noche triste” in the piece by González Castillo and Weisbach “The teeth of the dog”, a recent album by Gardel-Razzano.  And it took the Gardelian way of treating lyrics, phrasing it, a way of saying lyrics and music (Haníbal Troilo would be Gardel's voice made bandoneon), which will live forever and ever. And Gardel, the most famous of the national singers, decides to be the best tango singer of all time.  And he alone, helped until 1925 by Razzano, encourages a non-existent tanguero repertoire, “Mother”, “Prince”, “Cascabelito”, at the beginning in his 2x4 recordings, and adds several events of the  first tanguera s, “Our Father” and “Whistling” by Azucena Maizani, or even its competitors, “El patotero sentimental” by Ignacio Corsini. E stimulates young poets such as Celedonio Flores and in 1921 recorded “Margot” from the poem of Negro, “Por la pinta” A slow learning that only in the mid-twenties conquers all equally, full summer alvearist that did not foreshadn the dictatorship of Uriburu and Justo, and that, then, will make let's be your Salieris.  It is not Gardel who follows Tango, he does Tango, does the Guardia Nueva, and successive renovations with  Ástor Piazzolla  and beyond.

And it also underpins the mass media in the record and radio industry, Argentina's world pioneer, that establish an audience of their transcending borders.  The tango-song from 1917 to 1935, the date of his death, is the most consistent cultural policy project of integration in Buenos Aires, one that goes from the bottom up . It combines wills without neighborhoods that prefigure the typical Buenos Aires, with a cluster of ghosts on their backs, the gaucho, the black, the compadre, the immigrant, the prostitutes, the good children, the payadores, the organito, the caudillo.  The backs of the Gardelian legend, of the genius of Gardel, carry these models of a mythical Buenos Aires. Under the tuxedo, the dust of history.

Together with guitarist José Ricardo he leaves in Barcelona, and in two months he makes twenty-two recordings. Resounding success pushes him on endless tours and Madrid, New York and Paris open doors and palaces. In 1928 I would write to Razzano, “The sale of my albums in Paris is fantastic. In three months, 70000 have been sold, they are scared and do not supply,” and commented that Josephine Baker, Maurice Chevalier and Charles Chaplin's son was applauded in the City of Light.  Gardel was the first global Latin American star — and perhaps, only from the Southern Cone, at the height of Frank Sinatra and Marilyn Monroe in America.  Cinema from 1930 would bond its size as an international artist, from “Luces de Buenos Aires”, filmed in France with the company “30 porteñas faces” with the unique Sofía Bozán, the first national sound film, to the last American trilogy, and“Tango on Broadway”, “El día que que quieres me” and “Tango Bar”. While Gardel had made his debut in silent cinema in 1917 with “Flor de durazno”, the visionary artist filmed some famous musical frames in 1928, with the direction of Eduardo Morera, in an anticipation of the video clips.  One of the secrets of the validity of the Creole Thrush is that it was an advance of his time, and at two thousand, too.

1933. They will dress for a party with their best color

I went and came but never stopped passing through Buenos Aires to visit Mama Berta, in the house of Jean Jaurés del Abasto street, today Casa-Museum.  Little by little it reaches almost a thousand recorded works, that if we count that at least four shots were made, the average is a theme per day for two decades, without weekends or holidays. With his mischievous smile, and a little leftover, he endured those who fustigated him for expanding his repertoire without national or stylistic boundaries, total, sure knew, vocal cloth and expressive communication left him - although he never traveled without his singing teacher “Che Carlitos, largá la la canzoneta” was recriminated from “Critica” in 1931 after a performance at the Broadway Theater, a popular newspaper that had helped a lot in spreading his talent, but now he felt that Carlitos was running away, just like the old tangueros.  Gardel was legend long before Medellín “Voz Gardel, voice tomorrow, /voice for the memory of a sky with window/Now is more Gardel, and so far away, /Above time, in the subtle/territory of myth” in the enduring words of the poet Raúl González Tuñón,  a collaborator of “Crítica” Before the diatribes of that performance at the Buenos Aires theatre, Gardel recorded the following day four songs in French with the jazzman orchestra Kalikiam Gregor. A preview of the Gardelian tempo you will find in New York with Turig Tucci's orchestra, the latest recordings that leave aside the “brooms” -guitars - that had accompanied him in the criolist cradle, invents a Buenos Aires tempo that will mark the future tango performance of Edmundo Rivero and Roberto Goyeneche, and a refined letristics, authored by Alfredo Le Pera, which blows the new stadiums of tango-song, less arabalero, more sophisticated, more representative of an argentinity latertinado, in  Homer Manzi  and Homer Expósito.  Listening to the gardelian evolution of “Copen la banca” (1926), with the guitars of Ricardo and Guillermo Barbieri, to the latest tracks, “Confesión” and “Gajito de Cedrón”, means to dive not only into the development of Tango but in all popular music And that's what we don't add the unclassifiable genius “The day you want me”!

In 1933 he visited Buenos Aires for the last time and Gardel confesses, “ Look at me... if you stay all year in Buenos Aires, at six months they don't even give you the time.  That's why I cut abroad from time to time... Buenos Aires is very nice, che. Its Corrientes and Esmeralda have an indefinable and powerful charm that binds us like a steel tie... but when you know Paris it doesn't quite satisfy... but  Buenos Aires is so deep in my heart that if I heard these very words of a foreigner I would put up a zafarrancho ” It touches Gardel's words when he may have chosen to be a citizen of any country, and he chose to be Argentine until his death. His homeland suffered authoritarian and anti-popular governments, the infamous decade repressed freedoms and rights, the men and women of the people went hungry — he visited a novelty in Buenos Aires, the village misery in Retiro, and he knew it represented the promise of better times.  Leguisamo said that Gardel had no dimension of its impact on the village: on the day of his funeral a tearful humble man told the press, according to Horacio Ferrer, “from today we will be poorer” The magical gardelian dreamy, a channel of rebellion popular, is another prolegomene of Peronism.

That massive and chaotic funeral was a hot February 1936, almost eight months after Gardel's fatal accident on June 24, 1935, on a technical scale in Medellín. Behind was an incredible journey of Morocho del Abasto's body that had even a farewell in New York. Three days before his calcine in Colombia he had sung at the Teatro Real in Bogotá, about to end a matadora tour organized by the recording companies and Paramount, Gardel's work ethic is sublime, and his  last tango was “Tomo y obigo”, the first success that he made famous at any latitude, “Force canejo, suffers and not cries/That a male man should not crie/If the fields talked...”, a twist with Creole flavor that had eternity destiny .

“ Not to be forgotten in Buenos Aires amounts to immortality,” José Barcia said without a doubt . On July 17, 1935 Ulises Petit de Murat understood in a platense cinema that Gardel would never leave the Argentine heart. “El día que me quieres” was premiered in San Martín cinema, a month after his death, and the collectives changed their routes to transport for free to the public of all ages. The hall overflowed and Monteverde Avenue was filled with people who could not enter the room. Police and firefighters were trying to contain the public he was pushing. And the main theme of the film had to be repeated countless times at the risk of tumult. Barcia explains, “Gardel is a phenomenon for us and it will be for our children and for our grandchildren, as it was for our parents, because Gardel is the friend on the corner, the co-worker, the boy from the neighborhood, the confidant of dreams and is, above all, the owner of singing magic, of the charm of harmony that reaches the hearts... who listens to Gardel is both the man who is alone in Corrientes y Esmeralda and that of Villa Piolín, the university cloister and the lost ranch... as if he established one of the few links that unite Argentines above their passions and their fanaticisms, has managed to bring them down by the, perhaps, only way they can march together: that of emotion and nostalgia that their teenage sentimentality is made ” Here it is now, next to me, by our side, with his wide friendly smile and his hat overturned on his right temple. Hand to Hand

The agenda of the mother room