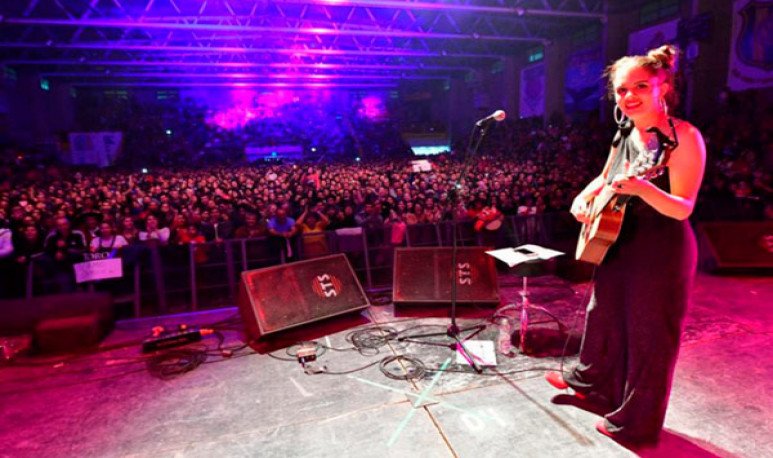 Camila Ibañez  began as a simple girl and teenager who went to the municipal choir of  Puerto Madryn  , her hometown in the province of Puerto Madryn Oh , Chubut . Later, he was part of a band with other students from the school he went to and toured different places. Social networks were part of his everyday life and,  when he was 15 years old, a video of him singing “Apoños Estés con é, l” by Luis Fonsi was viralized.

Camilú , as it is currently known, is 22 years old and is based in  Buenos Aires , which he chose to study speech speech when finished high school. However, his musical edge and hobbie grew in such a way that he set out to live completely by and from it: singing on his various social networks, such as Youtube and Instagram, in bars, social events and small locals as well as composing his own songs, and not only publishing from other artists: in one of his first interviews with  Chubutense media, when I was just coming to Capital Federal, commented that it was “something I didn't expect and never imagined, you can't imagine until you're there; there are people who will see me, they ask me pictures.”

Today she is already a dedicated artist, and 2020 was a great year for her as she started it with the presentation of her first debut EP “Tiempo de Espera” , with four songs of her own; then she published “Sirena”, the first preview of her next record work, her first album . And finally, on November 26 he launched “Me enamoré” with Colombian singer-songwriter Alejandro Santamaría, with great impact on digital platforms.

In addition to the acoustic ballads of his EP, Camilú has an audiovisual production of him, in a kind of backstage - documentary about how and why he wrote the lyrics of “Para el amor”, “Valiente”, “Desayuno” and “No vuelvas”, available in his  official Youtube channel . The relationship with his followers, who reach more than 210 thousand on Instagram and more than 20,000 listeners monthly on Spotify, is strong and constant.

The video for “Sirena”, too, has since September 25 (the day of its premiere) more than 280 thousand views, and the song is a mirror of how enamoradiza it is: “When I met that person I got home and wrote this song, I think it was also because that feeling was added to him that he lives super far, the next day he was leaving and probably would never see it again.It is one of my favorite songs, because it emerged from an impulse and describes very well how I am, intense and romantic,” said the Madrynense artist.

The presence is not only digital or in small bars:  Camilú shared stage and videos with artists established nationally and internationally  such as Coti, Antonio José, Cruzando el Charco, David Bisbal, Chano, Benjamín Amadeo, Marcela Morelo, Mery Granados among many others; he was also in programs with Mariano Iúdica, for giving only one example of his many presences on television and also radio programs.

The   Madrynense   artist has a whole path that she will continue to travel, and that will articulate with her hometown, as she participates in many of the Popular Festivals in the province of Chubut, such as the  Cordero ; without ceasing to think about his roots and beginnings, always thanking his music teachers and his family.

At the end of 2019 he joined Atelofobia Producciones and also The Sello, who delved into the professionalization of his musical career.  Camilú has great present and future  and, as long as there is no specific date for the release of his first album, he can continue to enjoy his audiovisual works, musicals and social media collaborations with other artists.