Trifulca was born in 2015 to move the contemporary tango scene, incorporating two elements: humor and social and political criticism. 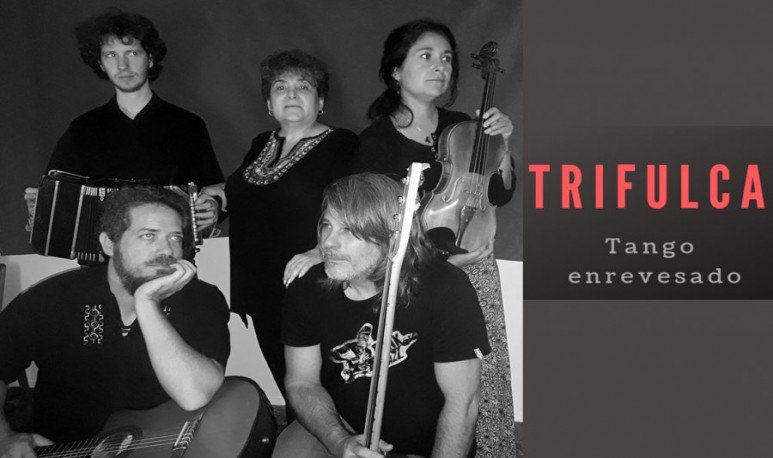 The hectic scene of contemporary tango has as one of its most belligerent protagonists the Trifulca formation, convoluted tango. According to Diego de Charras, his guitarist and arranger, he postulates a relationship “a little heretic with the musical canon” and a singular orientation in which social criticism occupies a central place.

“We have a timbral formation that is not completely strange to tradition but is not completely canonical either. And we play with two elements that, although they have a background in the history of tango, do not have a strong presence: humor and social and political criticism,” explained De Charras about training.

The guitarist pointed out the transformation that involved Trifulca. The group was born in 2015 with a classic trio format with bandoneon and guitar. It now offers a training with double bass and, above all, viola, which provides a nuance on the most consolidated sound of Buenos Aires aesthetics. The current integration is made up with De Charras (guitar and arrangements), Irene Frydenberg (vocals), Federico Kersner (bandoneon), Lorena Silva Paiva (viola) and Horacio Bazzi (double bass).

“We started with a more traditional relationship with tango and its subgenres (waltz, milonga). Then we advance to candombe and some derivation of the chamamé. We were incorporating, little by little, versions of Argentine rock and folklore in tango time and -then- adding own compositions or contemporary authors,” explained De Charras.

“On that path there is an emphasis on some compositions with a certain political sense such as 'La estrella del pueblo' by Peteco Carabajal, dedicated to Eva Perón, or the 'Milonga del Fusilado', by Los Olimareños, dedicated to Ernesto “Che” Guevara”.

What are the limits of Trifulca in his challenge to the tango tradition?

De Charras: It's a rather heterodox dialogue relationship. We think that's the best place to exchange with the genre. We try to be respectful, but at the same time without getting caught up in a canon formula. For example, we make a version of “Tu” (José Dames and José María Contursi) that starts in blues, unfolds in jazzy key and has an outcome under the temperament of a bossa nova. But at the same time there are authors, like Enrique Santos Discépolo, who make them close to their most consolidated versions. We work with our own themes and works by contemporary authors. Such is the case of Jorge “Alorsa” Pandelucos or  Alfredo “Tape” Rubin.

How do they characterize the current tango scene since Trifulca?

DC: It is a very diverse environment where, from now on, there are very different tastes and lines. I think we feel very close to those who intend to build new lyrics and music. But even, within that variant, the existing formations are very diverse from each other. There are composers, like the “Tape” Rubín, who observe it very close to our identity because on the one hand he escapes tango and, on the other, one would say he never betrays it.

In that line we all have the challenge of working to consolidate an audience, to overcome the difficulties of the musical circuit and - the most difficult - to trail against the cultural stumbling block that looks at tango from a place full of prejudices or pruritos and, that barrier, especially towards more new ones generations, is the most complex to remove.

Discépolo, the philosopher of tango

Mercedes Simone, “The lady of tango”