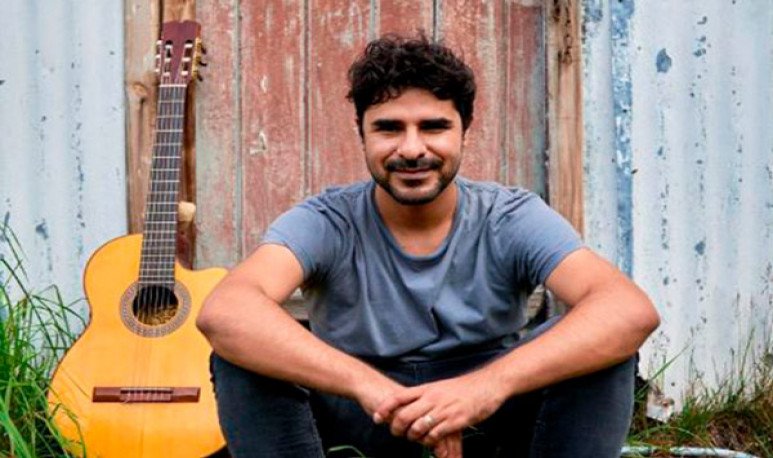 Mentioning singer-songwriters from the province of   Santa Cruz   leads us, unfailingly, to a triad of popular artists who have been in the ears for decades not only from Patagonians but from the whole country: we talk about  Hugo Giménez Agüero  - who although he was not born in that southern territory, is considered   santacruceño   by adoption,   Eduardo Guajardo  , the”  Guaja " , and H éctor Raúl the “Cat” Ossés . However, the new millennium brought us new voices that continue the legacy of those pioneers, and one of those voices is  Ariel Arroyo .

Ariel is a righteous son of the   Turbio River  Basin, as is the “Guaja”, for drawing some parallelism with the rest of the music references in that province  . Born in the town of 28 de Noviembre , to   Tucuman parents , he undoubtedly states that what he does is Patagonian music, “because I am Patagonian and built from that identity,” he said once.

Among the popular singers of   Patagonia   there is an interesting debate about what Patagonian music is: there are those who consider music from that region only classical rhythms inherited from indigenous roots. Like  loncomeo ,  kaani  or chorrillera . Hugo Giménez Agüero, for example, in his process of becoming a santacruceño, when he began to compose, he learned those rhythms to capture them in his repertoire.

Eduardo Guajardo, meanwhile, considers that he does Patagonian music, although “for the market” is not so, given that he moves away from the kaanis or loncomeos. But its repertoire is soaked in  Patagonia , workers struggle, mining struggle, Patagonian uprooting and abandoned towns.

Ariel Arroyo can be labeled - as it were somehow - in this second group. Obviously, not everything is black and white, there are Patagonian troubadours, like the Chubutenses of La Chuza who in their wide repertoire can mix a loncomeo with an unmistakable candombero rhythm, but always composing and carrying the message of deep Patagonia.

But let's go back to Ariel Arroyo: his music unfailingly deposited us in his native  Santa Cruz  : his material has to do with his childhood, with the history of the town from where he comes, the struggles of the mining workers and also the old strikes that are part of the history of the province.

His interest in knowing the place that saw him birth and grow led him to investigate   Rebel Patagonia  , those events of the 20s in which the police forces, with the endorsement of the then president  Hipolito Yrigoyen  shot the gauchos who asked for decent working conditions.

So was that one of the songs of  Al sur del Cielo was born, his first record material, called Patagonia Rebelde in which  Osvaldo Bayer put his voice at the beginning of the topic. He was not the only personality who participated in that recording, as he also featured the presence of Milena Salamanca, Peteco Carabajal and  Eduardo Guajardo , among others.

Ariel believes that who composes must be a chronicler of reality, or in the case of Rebel Patagonia, history, and his identity is nurtured to project his work.

South of the sky is composed of twelve songs. The one that gives the name to the album -which is the first -, is followed by Patagonia Rebelde, and continues with Azul de infancia, Following a star, Zamba del desamor, Chaltén -by Hugo Giménez Agüero-, Childhood colors -of the “Guaja” -, Milonga austral, Dream in the dark, Light shed, Chacarera del pobre and concludes with Zamba de olas.

Ariel Arroyo consolidates itself as one of the new voices of santacruceña music, continuing with the legacy of those pioneers mentioned at the beginning, sharing and interpreting works of them, and putting his mark on him to bring his message about Patagonia to the rest of the country.