Home Argentine Music Alberto Merlo, the Lord of the South

The song surero had in Alberto Merlo, the composer born in Santa Fe, one of his great exponents. 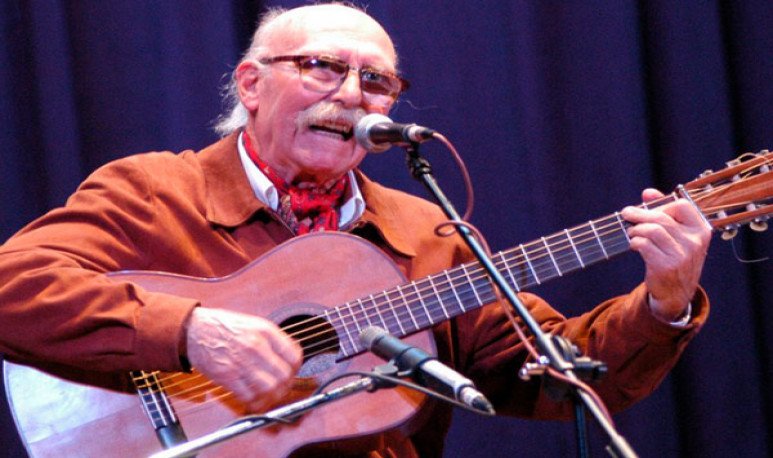 Solitude of a pawn, swallow work, distance from the beloved, a long horizon are present in music of the pampas plain. Sounds and rhythms that seem to be there forever, both in the landscape and in the soul. The social, contained in a descriptive flash of an obvious injustice.  That is the essence of surero song.   This musical genre had Santafesino Alberto Merlo as one of his main figures.

Alberto was born in February 1931 and  passed away on April 10, 2012.   To this day, his place in Argentine folk music is central, as someone unique in its subgenre.

Merlo  was born in the countryside, in Colonia Bossi, San Cristóbal department, in the Province of Santa Fe.   Of naturalized Italian Argentine parents, he was the youngest of nine Argentine brothers. Most of its neighbors were Piedmontese communities, then their mother tongue was Piedmontese and not Castilian. Merlo was born and grew up in a rural environment soaked in Creole traditions, next to the pawns swallow nurtured by native singing, among milongas, footprints, styles and zambas became a messenger of national sentiment. He began singing tangos with his brothers until he settled in Jesús María (Córdoba). There he formed a trio with whom he went to Buenos Aires.

They say Merlo was a person who spoke little, but with the word righteous. Very nice. Although he seemed very serious  he had a very good mood, he was very affectionate with his loved ones and a family man.

For something they put him “The Lord of the South,” for his chivalry and his presence both above and below the stage, and it is interesting the path he was sowing for the singers who came later.

Legacy of a country man

From the personal story I already told, Antonio and his brothers spoke in Piedmont, and then  as he was schooling and interacting he was incorporating Castilian as well as his brothers.   The possibility of growing up in the farm, being the youngest of nine, the Chiche as his brothers said, gave him the possibility to listen to the swallow pawns that came from the province of Buenos Aires and that is where he takes contact with surera music. It is that folklore was not heard in the dances that were done in Colonia Bossi, you heard some tango or the foxtrot classics.

Among his works are La Vuelta de Obligado, When the afternoon agonizes,  Pion de fierro, Night and Way, Pa'Dolores, Rincón de López, among others.

Sureera music lovers remember that Antonio went for 31 years following the Fiesta de la Llanura. It is one of the most traditional surero singing celebrations that takes place in Coronel Dorrego, Buenos Aires.

After his death, at first,  the idea was to bring the ashes to Colonia Bossi. Part is there and part in the José Hernández Museum in Mar del Plata, which is a place he really liked to go because every visit he came always took them to the Reduction del Pilar and the José Hernández Museum, which were the places he liked to show in Mar del Plata.  Silver This was made public and found out in Coronel Dorrego, and that is how some ashes ended on the edge of Route 3 at the entrance of Coronel Dorrego, next to the Symbiosis Pampa that they have there as a representation of the Fiesta de la Plains.

Sureera music, southern music or surero song is the name that receive a series of folk based musical styles, characteristic of the Pampas region of Argentina. The main styles and dances that make up it are the milonga surera or southern, milonga pampeana or milonga campera, the malambo, the payada, the figure, the footprint and the triumph.   Associated with the Gauchesca culture, it is traditionally performed with solo singing and guitar.