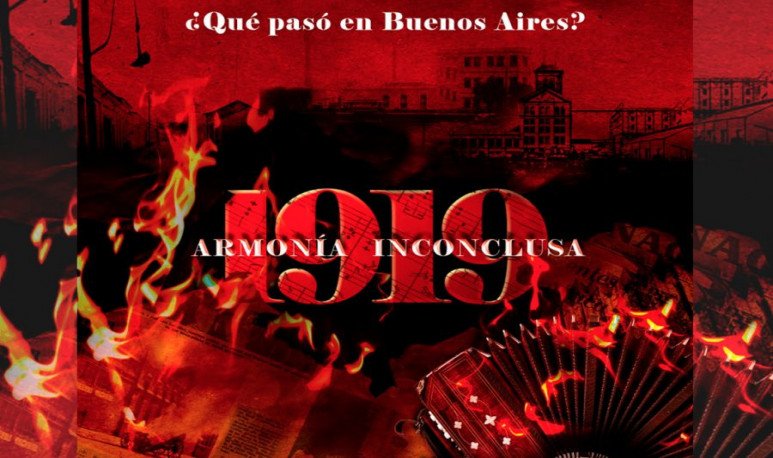 Theatrical director Leonardo Napoli premiered “1919 Harmony Unfinished”. The musical evokes the figures of the first tango bandoneonist, Paquita Bernardo, pianist Osvaldo Pugliese and writer Leopoldo Marechal. Imagine among them a probable encounter in Buenos Aires convulsed by the violent events of the  Tragic Week , which took place in January 1919.

“In principle we imagined making the life of Paquita Bernardo, the first bandoneonist of  tango . In addition, she was one of the few women to lead a group of her own. Born in 1900, she died at 24 years of pneumonia. Then we associated her to this meeting as part of Tragic Week,” says Napoli. The work was written with Maria Prado and can be seen in Hasta Trilce (Maza 177).

“In addition to being one of the few women to lead a band of her own, Paquita was a feminist. He had worked in stockings factories and had combative workers' positions close to anarchism. They called it 'La Flor de Villa Crespo, 'and with its musicians she performed in the bars near the Maldonado stream”.

“He smoked, had problems with  alcohol , lived at night, defended the rights of women and women manufacturers. He played in conflicts and in support of workers' strikes,” continues Napoli's list of this singular character, now practically forgotten and of whom Gardel recorded the tango “La enmasquerada”.

The story of “1919 Harmony unfinished” is told by an adult Osvaldo  Pugliese  . He evokes that encounter during Tragic Week between him, the bandoneonist and the author of “Adam Buenosayres”.

The role of Pugliese adulto is played by Rubén Santagada. While, as a teenager, when he was the pianist of the performer's group, Franco Araujo does. Ignacio Bernárdez embodies Marechal. The role of Paquita is in the hands of Rocío Araujo, bandoneonist and singer nominated for the  Gardel Awards.

Napoli points out that one of Paquita's particular features was that he refused to dress as a male. Thus they forced the canons of the time for a woman instrumentalist who wanted to venture into the atmosphere of the tango that was being born.

In addition, his refusal to marriage, cooking and home life. He broke a family mandate that his two older sisters had accepted. Also his fascination with Pedro Arolas and Pedro Laurenz and his dedicated commitment to music studio.

“The music of the work is one hundred percent Argentina and we work within the framework of musical theatre with a tanguero scheme, where waltzes appear, some zamba, a malambo,” says the director giving some clues of the musical climate that is associated with the story.

“Lo nuestro is not a Broadway style musical but Argentine musical theatre, inspired by Armando and Enrique Santos Discépolo, Manuel Romero, Francisco Canaro and all the creators of Buenos Aires musical comedy. A genre of its own in which there are times when you sing, others are performed and others are danced.”

Abel Pintos, a star on earth

Discépolo, the philosopher of tango