A CONICET researcher, along with a Swedish colleague, found signs that would promote a new paradigm. 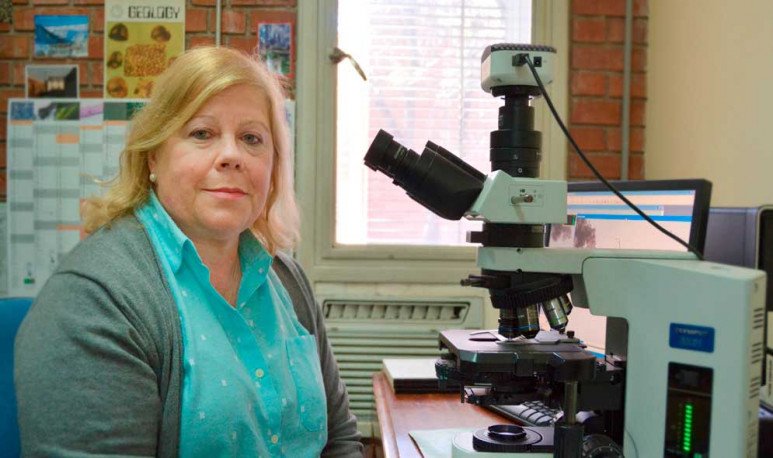 A  CONICET researcher, along with a Swedish colleague, found signs that would promote a new paradigm about the place and time when life emerged from water and began to colonize continents.

A  Swedish Argentine research team, in which a  CONICET researcher participated, discovered new evidence that would determine a new milestone in the origin and radiation of terrestrial vegetation. The find was published in the journal of the Swedish Geological Society, by the British publisher Taylor & Francis.

“What we find are the oldest trilete spores in the world Why are these spores so important? Because they would be from the group of vascular plants or their most immediate ancestors, that is, the most related anterior plants, which did not yet have a well-developed vascular system and would be between 6 and 8 million years older than those known until now that came from Arabia Saudi,” explains Claudia Rubinstein , senior researcher at the Argentine Institute of Nivology, Glaciology and Environmental Sciences (IANIGLA, CONICET-UNCUYO-GOB. Mza.).

The first steps of life out of water is one of the most important biotic events of all biological evolution because it produced deep and irreversible changes in continental and marine ecosystems; and in climate, because plants are considered to contribute to the decrease in dioxide of carbon and a cooling that gave rise to one of the most important glaciations in the history of the earth, at the end of Ordovician. “Plants had a fundamental impact on changes in the composition of the atmosphere, making the earth habitable and allowing the colonization of continents by more evolved organisms. When and where these first plants appeared is essential to understand the evolution of life and it serves, among other things, to build phylogenetic trees and place the base where plants migrated from their aquatic life to terrestrial life,” says Rubinstein.

There are few records about this event, there is no fossil evidence about these first terrestrial plants and therefore the reconstruction of this episode is carried out by specialists who study microscopic organisms called palynomorphs, which are the spores produced by the first plants and that today are found in sedimentary rocks.

According to the researcher, the terrestralization of vegetation occurred in a staggered way, first embryophytes appeared, like the small and simple current liver plants, similar in their appearance to those we recognize today as mosses. These most primitive plants produced palinomorphs called cryptospores. Then, vascular plants arose, the oldest records of which are recognized today by their trilete spores.

The finding represents a paradigm shift in the evolutionary history of plants since all the models interpreted so far had as origin from terrestrial plants to the paleocontinent Gondwana: “This is important because until today, both the oldest crypto spores and the oldest trilete spores, had been found in what was Gondwana. But now, for the first time, we find these evidence in what was the Baltic paleocontinent, which included present-day Sweden, and we should think that the plants could have originated no longer in Gondwana but in another paleocontinent that was separated at the time,” he says.

The new data allowed the researchers to construct some hypotheses about what could have favored plants to emerge from water and begin to populate continents: “We found spores in a region of central Sweden, in 23 samples of a drilling that reached 71 meters deep. We know age well because there are different groups of marine fossils that allow accurate data to date strata. In addition, there are layers of volcanic ash where dating with isotopes are made and they are very accurate. That is very important because we are relating these layers of volcanic ash to the appearance of terrestrial plants. In the sea that was surrounding what is now Sweden there was what is called a “super volcano” and we thought that those huge ash masses that were thrown probably contributed, because they were the suppliers of phosphates, nitrogen and other nutrients that integrated into the soils that were forming, promoting plant development,” concludes  Rubinstein .