Home Argentine Knowledge These are the benefits of reading

The neuroscience researcher, Adolfo García, tells us what happens in our brain when we read and why we should never stop doing it. 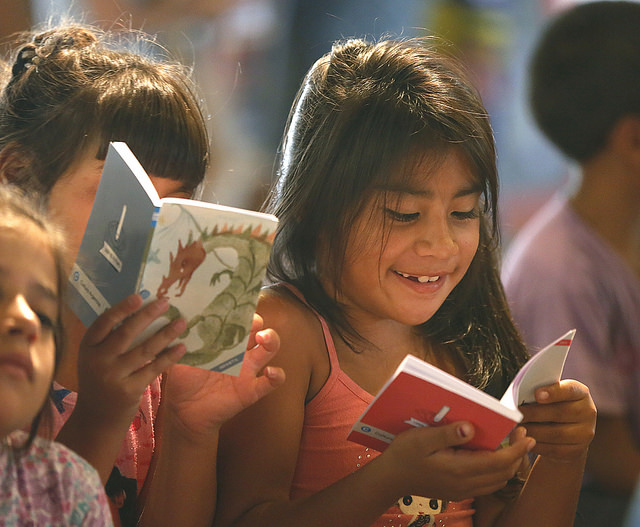 The letters generate intense activity patterns in the left temporo-occipital area. A fundamental area for the development of reading skills.

The systematic and guided exercise of reading generates changes in mechanisms that are associated not only with reading but with other cognitive skills.

Promotes the "theory of mind", the ability to infer what other people feel or think, without being told

-The sustained habit of reading encourages the "cognitive reserve", which is the resistance that the brain has to the decline of aging.

What have been the main findings of neuroscience in relation to what produces reading in the brain?

One of the most striking findings has to do with the detection of a specific brain area that specializes in the recognition of letters, basically. This is what a while ago was called "the area of the visual form of words" and today some authors call "the brain letter box", a metaphor not very successful because there is no box that contains letters but a region brain that plays an important role in the biological processes that are the basis of reading. That region is called the left ventral temporo-occipital, in 95% of the world population that area that specializes in the recognition of letters is strongly lateralized towards the left hemisphere of the brain.

That is why it is said that the people who have more facility for issues related to the arts, letters, words use the left hemisphere more of the brain and those who deal with the most exact or hard sciences, the right?

Actually there are many brain functions that are lateralized, that is, in which one hemisphere has more dominance than another, but this is only true for very micro functions.

That of the lateralization of logical and creative, artistic functions, is a myth that has spread in an incredible way. The truth is that there is not a single iota of scientific evidence in favor of that, and it does not resist much analysis either.

To propose a dichotomy between rational logical processes, on the one hand, and creative, aesthetic, poetic processes, on the other, does not make much sense. Many of the resources that make good art, whether programmatic, improvised, have to do with logical skills: from musical compositions, rhyming establishments, the plot of a novel, there are a lot of cause-consequence ties, including mathematical patterns, then it would be half fool to exclude them from what is creativity or the artistic. In fact there is participation of both hemispheres in activities that one can boast more creative or logical. But outside of that there are functions that are lateralized, for example: everything that is perceived with the right ear is processed first in the primary auditory area of ​​the left hemisphere and vice versa. The same happens with the control of the hands and legs, the movements of the right part of the body are controlled by the left hemisphere and those of the left part, the right. And that also happens with vision. So there is lateralization but not at that level of things as abstract as creativity or logical thinking, that is what is called a "neuromite."

But one of those functions that is lateralized is the recognition of the letters. And this left ventral temporal-occipital region is an area that allows the integration of systems, mechanisms, which allow to recognize visual forms, distance, the combination of lines in the visual space, with other mechanisms that are specialized to process speech sounds , phonemes, and reading is basically that: to dialogue in visual forms, to associate them with certain sound patterns, arbitrarily. Then this region has anatomical distribution in the brain that puts it in an ideal place to promote this integration between visual and phonological information.

At the end of the 20th century, in 1989 approximately, experiments were started in which it was compared which brain areas were activated when the person saw written letters versus other characters that are not letters, and it was found that the letters generate intense activity patterns and hallmarks in this same left temporomoccipital area. Moreover, with more recent research in neuroscience, one can also see the level of connectivity, how different networks are connected in the brain, and one thing that has been discovered is that children who have dyslexia, a developmental disorder in reading abilities , have reduced connectivity in networks that involve this particular region of the brain. So this is a very important area for this particular skill.

Understanding that there are different degrees of dyslexia, is reading beneficial for those who suffer from this disorder?

Indeed there are different types of dyslexia, the most widespread models today distinguish six different. And there are treatments and rehabilitation programs that are successful, but their success depends on a lot of factors such as the age at which the diagnosis is known, the age at which the treatment is started, the frequency of treatment, if there is a history of dyslexia in the family, and also the type. There are also studies that show that in children who have other types of reading difficulties, if an intervention is made, a program to improve and strengthen reading skills, changes in brain connectivity are achieved, that is, systematic and guided exercise Reading generates changes in mechanisms that are associated not only with reading but with other cognitive abilities. Reading is always at stake with other cognitive processes.

Another thing that has been discovered is that different words have different cognitive costs when read, that is, there are words that cost more to the brain to be read, for example: words that are more frequent are read faster, are processed with less effort cognitive than those that are less frequent.

This is interesting to understand that reading, although we call it as a singular noun, is not a single thing but that there are different mechanisms that the mind takes over according to the type of stimulus and word it is facing. There are some studies that began to investigate what happens when one faces literary texts, for example.

And what did they discover?

One thing that was discovered is that there is a cognitive capacity called "theory of mind", it is a capacity that all people have from a very young age to infer what another person feels or thinks without telling us. You can see, for example, aspects of your face or other body codes. Even this is measured with static photographs. People who have a better theory of mind are more likely to infer how a person feels just by looking at an image of their eyes, for example, than people who have a worse theory of mind. Y

A recent finding showed that regular readers of narratives, of novels, of fiction, have a better theory of mind than those who do not read fiction. An interpretation that has been given to this is that the narrative experience makes one constantly put oneself in the shoes of the other, in the shoes of the protagonist, and have to refine their abilities to implicitly infer what that person is feeling.

In another investigation the brain activity of a group of people was measured, throughout the days, while reading a novel. The participants were asked to read about 30 pages of the novel per day, at home, and each morning they were taken to the laboratory and measured their brain activity, for nine days. And, on the other hand, they were also evaluating what happened to another group of people who did not read the novel. What they found was that readers had greater brain connectivity in the left temporal cortex, which is part of this region that is closely associated with reading and also participates in general language processes, crucially in language comprehension.

Are there more reading benefits that have been discovered since neuroscience?

Yes. There is a concept called "cognitive reserve", it is the resistance that the brain has to the decline of aging. You may have memory problems, take longer to find the right word, symptoms of old age. It has been shown that reading, the sustained habit of reading, is one of the elements that seem to confer more cognitive reserve. For example, Alzheimer's patients who have reading habits develop the first symptoms years later than those who do not.

Findings have also been achieved in people with Parkinson's. One of the ways in which we understand language is because the brain internally simulates what we read, for example: there is a set of circuits that allow the legs and arms to move, when we read a sentence like “Juan is jumping”, which refers to the movement of the legs, part of the circuits that are activated and help to understand the prayer are the same as those who read allow them to move their legs, that is one of the manifestations of what is called "corporeized cognition."

It has been discovered that patients with Parkinson's disease, who have movement problems, have specific difficulties in understanding the actions in the texts, the rest of the information is well understood, comparable to people who do not have this disease, but when you ask them that they understand the actions of the characters, the bodily movements, they fail significantly. This seems to me to be interesting because you can find in certain reading deficits an indication that a person may have Parkinson's. And it also demonstrates that reading is a complex, varied process that does not exhaust itself, basically the reading is done by hand to the whole body, situated, human experience. Recognizing these links not only allows us to better understand the reading itself, in its complexity, in its ubiquity in the mind and in the brain, but also to think of new ways of intervening either for the diagnosis or for the rehabilitation of different difficulties. of cognition in general.