The prototype was developed by boys from two schools in Maipú. Robots provide support in critical situations such as fires or landslides. 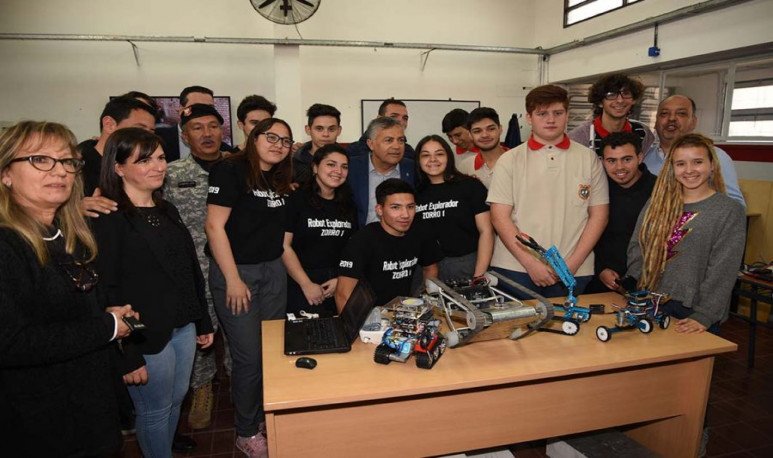 In March of this year  a group of students from  the Maipucinas  technical schools  , Guillermo Villanueva and Horacio Román Martínez Leanez,  began to work in prototypes of different robots programmed for different tasks. As they themselves clarify, it is a work that never comes to an end, since they are permanently retouching and updating it.

In this situation there is the “Zorro 1”, a robot that allows exploration in vulnerable places where fires or landslides may have occurred. And it is the prototype that yesterday its young developers presented to the government, and with which the Tactical Division of Explosives of Mendoza will work to adapt it to situations where their intervention is indispensable. Whether to manipulate explosives or to do a first scan in a critical area where a collapse or fire has occurred.

“ The division and teachers of the two schools will begin to get together with the intention of studying and modifying the prototype in order to be able to use it in real situations,” said the director of Digital Integration Policies at the DGE, Monica Pérez, during the a presentation that the adolescents themselves made to Governor Alfredo Cornejo and to the authorities of that division of the Mendoza Police.

“ We are going to have meetings with the two schools and their students, and we estimate that before the end of the year the project will be completed,” commissioner Luis Donoso, head of the Tactical Explosives Division summarized in his turn. The specialist indicated that in 2020 the project could be being realized, and “Zorro 1” would already be able to intervene in multiple contingencies or catastrophes.

“ The 'Zorro 1' allows you to explore places where a collapse has occurred; and we thought to do it because it is important in a province like Mendoza that is in a seismic zone,” said Aymará Videla (18), student of the Villanueva school and one of the creators of the robot.

“ None of us imagined we were going to end up introducing him to the brigade for use. But it is a good idea, since it allows to save at least 3 lives: that of the person who may have been trapped under the rubble, that of the rescuer who enters the site and that of the dog who participates in the operatives,” the fifth year students of Electromechanics synthesized, proud of their robots.

From the moment his “parents” gave him life, Zorro 1 was designed with a key goal: that the prototype could be the first to enter to do an exploration in a critical area with the mission of detecting if there are fire spots, gas losses and even people trapped in the rubble. “ Search for people and also provides the necessary information for rescuers to have a first screen before entering,” added Aymará and her colleagues from Villanueva school.

Although Zorro 1 was developed by the boys of this establishment, yesterday's meeting also participated students and teachers from Martínez Leanez. “ What has been presented to the governor and the members of the division of the Ministry of Security is a project that brings together the two prototypes that the boys have made. On the one hand, the fifth and sixth year students of the Villanueva; and on the other the fourth and sixth year of Martínez Leanez,” said the director of Digital Integration Policies.

A year and a half ago, this unit began to work on training for teachers in technical schools and equipment to build robots. And it was in that context that there was the first rapprochement with the  Tactical Explosives Division.