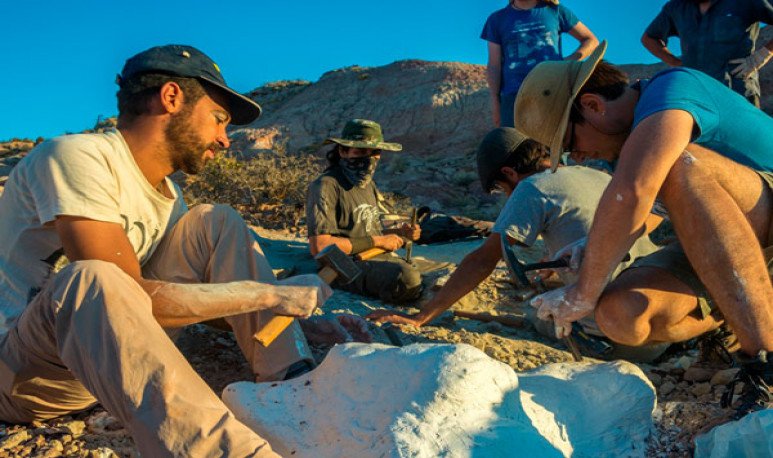 Again there have been remains of the life of  dinosaurs  in lands that today make up cities, in this case, in   General Roca  , province of  Rio Negro .

This little dinosaur, about 4 and a half meters long and 2 meters high, was called  “Niebla Antiqua”:  he hunted 70 million years ago and was small but dangerous, lethal. He had powerful jaws and teeth to tear his prey, and small bumps on his eyes, head and neck.

It is said to be small compared to other and latest findings in much of the  Patagonian area: he was not as big as his “cousin” the Abelisaurus or its ridges in the head and neck were not as shocking as that of Carnotaurus: however, it was powerfully quick to tear their victims, mostly smaller herviborans. It is so, moreover, that your forelimbs were poorly developed because of their little usefulness.

This information was collected and concluded through  scientists' research. This new specimen of carnivorous dinosaur was found about 70 kilometers south of the town and in 2018: it belongs to the family of abelisaurids, who lived at the end of the Cretaceous period in Argentinian Patagonia and also in what is now known as Madagascar or India, that is, parts of the southern hemisphere of the world.

The work is never lonely and is long, until the official presentation in an article in the National Geographic magazine: the transfer and study of fossil remains was in the laboratories of the  Patagonian Museum of Natural Sciences of  General Roca  , and after the scientific recovery and analysis work, will be exhibited and will form part of the paleontological heritage of rionegrino, which in the latter will be years has been increasing, due to the various discoveries in the province.

The discovery of “Niebla antiqua”, as it was baptized, is only the tip of the iceberg of a series of discoveries about new plant species and prehistoric animals in this site, commented the paleontologists and researchers of CONICET, Fernando Novas and Mauro Aranciaga Rolando. The research began in 2010 in the field of Alberto Arriagada and his family, who always collaborated with the work of the professionals, also understanding that “from the beginning promised great revelations”, in addition to the support of the aforementioned Museum and the Ministry of Culture of Rio Black, which is the enforcement authority of legislation that protects fossil remains.

It was in October 2018 that it was possible to return to that place and thus the team managed to identify various fossilized parts (bones of the skull, chest waist, remains of ribs, teeth and some vertebrae) of what we already know today -a little more- as “Niebla Antiqua”. The name was because on the day they discovered it there would be a thick haze in the place: the remains were analyzed by a tomograph and they were made a histological analysis, which allowed to get an idea of what these dinosaurs were like.

The study of his skull revealed that it was more compact and shorter than that of other carnivorous species, although no less powerful. “If we compared them to current dogs, they would come to be like the dogue or the boxer of the dinosaurs, we presume they had powerful jaws and could tear easily when they biting,” one of the researchers explained. He added that the analysis with the cranial cage tomograph revealed that “they probably had excellent senses of sight and smell, probably better developed than the ear.”

Finally, the histological analysis of the animal's bones, carried out by the CONICET fellow Jordi García Marca, allowed to conclude that the discovered specimen was an adult and that its length would have been the maximum that this animal reached.

The rich heritage is adding copies of what was life in ancient Patagonian: the discoveries will continue to be impressive in the recognition of different species. Where and how will the next be?