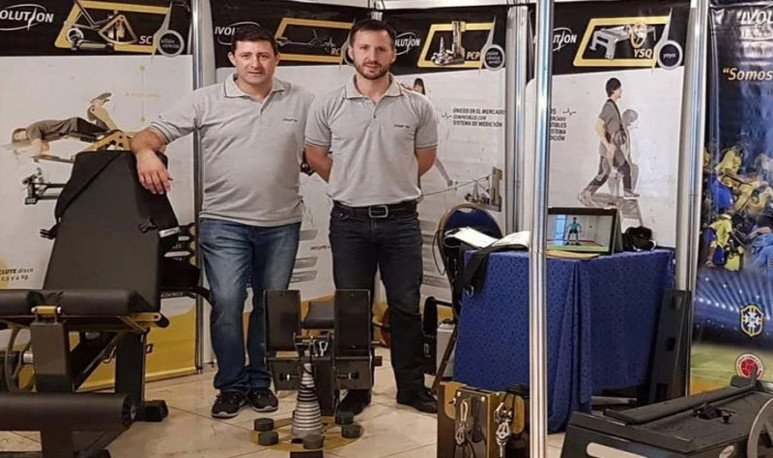 It is a machine to rehabilitate football players and athletes who today use almost all the first teams. It is also marketed in Colombia, Peru, Chile, Paraguay, Uruguay, Italy, Russia and Spain.

“The company Ivolution came about eight years ago, a kinesiologist told us about new rehabilitation machines,” said Federico Crippa. He added that they searched for a workshop in Sunchales and manufactured a  prototype , then presented at a congress in Buenos Aires. It was something very new and rarely seen. The  entrerriano  rehab machine took shape.

Thereafter they started producing the product on demand with their partner Conrado Avaro. The partner was already in the branch of rehabilitation and training equipment, but as an importer. They manufacture inertial equipment in which resistance is variable and instantaneous at each repetition and is proportional to the developed force. This allows a more natural and dynamic recovery.

Crippa thought of something else: software for the rehab machine. It connects to the equipment to measure the strength and speed of movements, allowing the patient to track the patient against his or her history.

“We started to grow and become acquaintances, we made an SRL and began to travel to exhibitions,” says Crippa. This started the first distributor in Miami and then joined Colombia and sellers in Peru, Chile, Paraguay, Uruguay, Italy, Russia and Spain.

In the World Cup in Brazil already had their rehabilitation machines the national teams from Colombia and Peru. For the World Cup in Russia they made special machines for  Argentina , Brazil and Uruguay and got the Russian distributor. “It wasn't a redemption, teachers and kinesiologists see teams as a necessity and told us they needed them,” he said.

The numbers of the rehabilitation machine

In this way, they went from selling 214 rehabilitation machines in 2017 to 318 in 2018, to approximately $40,000 each. With more than $12 million in turnover, to which another $2 million would be added for the sale of software on each rehab machine.

“Foreign trade did not serve us to earn more, but we are now lowering the price to distributors to strengthen them,” he explained. In addition, the inventor of the rehab machine said they plan to launch two new machines. They would improve product finishings to be more competitive abroad.

Source:  One Entre Rios -  We Are Entrepreneurs