Romina Carranza is a biomedical engineer and created a device for non-seers: a haptic plan of the premises of the National University of Córdoba. 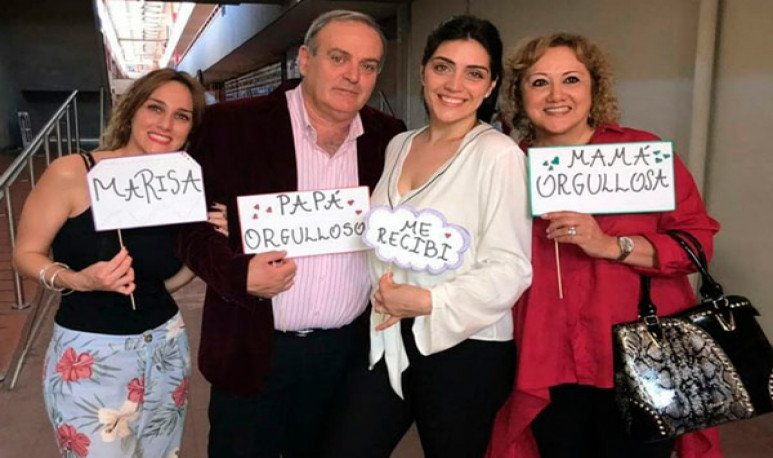 The   Chubutense   city of   Comodoro Rivadavia   is much more than the capital of     wind  and  oil   ; Romina Carranza is a biomedical engineer and created a device for non-seers: a haptic plan of the premises of the National University of Córdoba.

The 27-year-old studied at former ENET No. 1 and from the age of 18 she lived in the capital city of Cordoba, where she received a biomedical engineer; she currently works in the area of health radiophysics of the Ministry of Health of Córdoba, where she evaluates the quality of diagnostic imaging equipment and also works in a consultant in the area of quality medical equipment.

His academic passion has been marked since his childhood. She is the daughter of Professor Carranza, known at the same technical school where she studied, and also for the local that she has on Rivadavia Avenue between Alem and Viamonte: Electrónica 2000. “I grew up in the business, When I was a little girl, I spent a lot of time in the workshop and set up games inside electronics. I grew up there, I was learning a little more, from placing orders to counting trainers. I think that's why I was attracted to electronics, but in high school I ended up choosing electromechanics, Romina says.

The decision in high school and career, like many decisions that will mark a person's future, was difficult: “I really liked electronic engineering a lot but I felt that some things I had were boring stockings. I was also not so defined that I wanted to study, but my sister helped me with a vocational test. One of the options he gave was biotechnology, electronic engineering and another career.” Finally, it was decided by the UNC and the Biomedicine Engineering career, since it combines medicine with electronic engineering, said the comodorense professional.

During a subject, Rehabilitation Engineering, she and her group had to carry out a project and work with some disability to improve people's lives: so they met Fernanda, a young non-seer who works in the Ministry of Social Development of Córdoba, and thanks to the plan haptic of the University City of the National University of Córdoba, for the first time in his life he could feel with his hands and imagination what that pavilion was like.

“Fernanda is not a seer of birth, but you see her and manages an autonomy that few manage” and adds that “we told her 'we have to present a project where we improve the quality of life'. We asked him what he needed, what he needed, and he told us 'the truth that I don't need anything, but we thought, 'and he began to throw away everyday things that one as he is not in that condition does not visualize it.”

Fernanda's only wish was to know if he had a tree or a building in front and the requirement that the project serve everyone. So the group of students chose the university site. They approved the subject and the project continued: “What we did was make a haptic plan, like a model, where through the senses you can capture certain information.” They studied scales, textures and so on and adds that they had to think how to “make it noticeable to the minimum of the finger and how to do the braille system on top of a model”.

Fernanda's excitement spread to the entire team of today's biomedical engineers. Romina states that “it was something very nice, leaves you a lot of feelings of gratitude, comforts you because the truth helps and adds a lot. It's something totally inclusive, a contribution to society, a huge contribution and it's well done, so you see all things together and it's a very good experience.”

The   comodorense   today based in Córdoba, does not forget her roots, her families and the pride of being part of the city that has just turned 120.