The LLAMA project is located in Salta and will be one of the most important portals in our region to observe the universe. 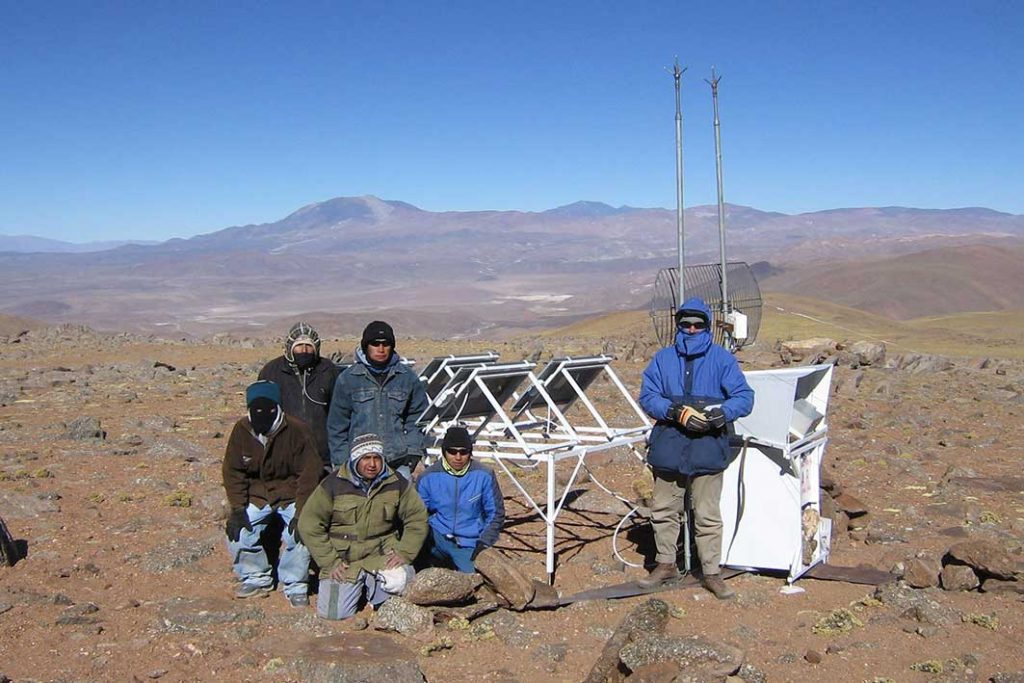 Puna salta, 4820 meters away. Wind, mountain, rock, silence that looks like eternity, and a watchtower of Brazilians and Argentines who will look to see the Universe. This is  LAMA , acronym for   Large Latin American Millimeter Array  . The project, launched in 2014, will be the instrument with the highest spatial resolution on the planet. It will operate fully in combination with ALMA, another astronomical complex in Chile. “Right now, the various components of the radio telescope are already in Salta and it is expected that by the end of the year it will be armed,” says Gloria Dubner. She is a member of the LAMA steering committee, and director of the Institute of Astronomy and Space Physics (IAFE).

Solar flashes, nuclei of active galaxies, molecular clouds, extragalactic cold dust radiation and extrasolar planets will be seen. These are some of the study objects that LAMA will have when you start your observations individually. Before interconnecting with ALMA ( Atacama Large Millimeter Array ), located at the same height, on the other side of the  Andes .

LLAMA is a 12-metre diameter radio telescope for millimeter and sub-millimeter waves. These are very high radio frequencies, and that serves to explore molecules in space, where there are many that have an emission line in those bands. The birth and death of stars can be investigated. Not only will it be possible to do deep cosmological research, but it will allow us to study the environment of the black hole in the center of our galaxy. You're going to have very high resolution images. This is how Dubner explained about the  project , led by the platense astronomer Cristina Cappa.

Just over eight million dollars cost Brazil the antenna, built by the German company Vertex. Months ago he arrived unarmed in about twenty lumps in Zarate. Some of them of dimensions that exceeded the width of the route. This made it difficult to transport vehicles on their way north and forced them to take no few detour to avoid certain steps. In total, about 12 days took the trip to the long convoy of trucks. One of them had a mishap coming to Susques. The affected part must be checked by an Italian engineer. All parts are protected by insurance. In the worst case, if the total destruction of the damaged part should be declared, it will be manufactured again.

Jump to the future

The team is entirely in  Salta , while bidding is under way for the foundations where LAMA will be posed.It will be located, to spy on the cosmos, in the locality of Alto Chorrillos. So far, a 6-kilometer long road with wide bends has been built to get there without problems, after joining the stretch to National Route 51 that goes to San Antonio de los Cobres. This is the nearest village and where the main building will be built with the offices, laboratories, dormitories and general facilities of the complex. During the day we will work in Alto Chorrillos, but there no one can spend the night on a health care issue. The base camp will be located in the nearest town, 22 kilometers away, and 3800 meters high.

One of the characteristics that makes the Puna an exceptional stage for  observing  the Cosmos is its air. Extremely dry, due to its high altitude. This prevents water vapor from the atmosphere that degrades the sensitivity of the telescopes. These advantageous technical conditions offered to be located beyond 4000 meters go against the human body. At that point oxygen decreases, and there is a danger of being affected by acute mountain disease. Based in San Antonio de los Cobres attempts to alleviate these adverse geographical conditions, although it is still sky-high.

All these facilities, road infrastructure and other works are borne by Argentina, which must also invest $8 million. This is established in the agreement signed between the Ministry of Science, Technology and Productive Innovation and the Foundation for Science of the State of São Paulo (FAPESP). Once launched, LLAMA will be operated by the Argentinian Institute of Radioastronomy (IAR-CONICET-CIC) and the University of San Pablo (USP). The operation of LLAMA

LLAMA will initially be used between Brazil and Argentina as a simple antenna. Of that kind of radio telescopes there are already others in the world and for decades. There is nothing new, but the sky is too big and there is still a lot to explore. Having it dedicated only to  astronomers  in Brazil and Argentina is already a wonder. It means not having to go out and ask for observation time in other telescopes around the world.

When operating in conjunction with ALMA's 64 antennas, it will function as a large baseline interferometer. The site was searched, which is 120 km in a straight line from the astronomical complex located on the other side of Atacama in Chile. It will be the instrument of highest spatial resolution and definition that ever existed on Earth and in space. Dubner knows the legacy that LAMA will mean for the training of young  professionals  in these latitudes.

Young people competed in NASA with their project

Thinking Big: From Patagonia to NASA