The company that Bill Gates founded has a strategic partner in Mendoza, the Tomás Alva Edison School. Students learn with technology. 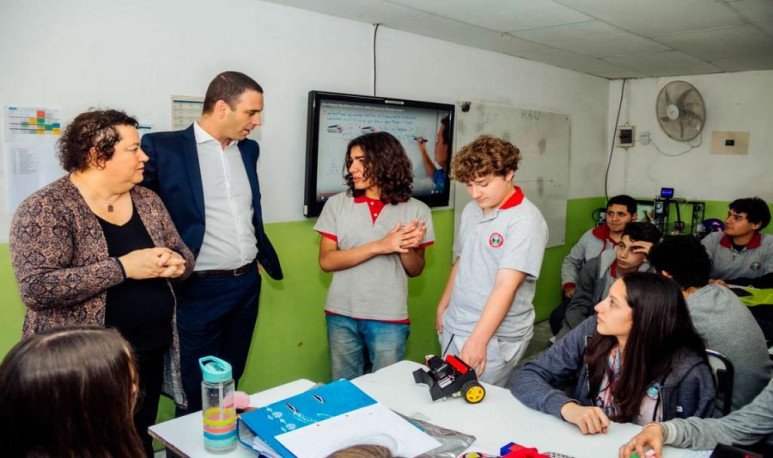 “We are very happy with the visit of Luciano and Estanislaus. Its presence is very productive not only for the  Tomás Alva Edison Foundation  but for students of all educational levels.In our meetings we continue to think about the education of the future and are very grateful to remain accompanied by Microsoft on that path and proud to be part of the Microsoft Flagship School Program,” said Graciela Bertancud, president of the Tomás Alva Edison Foundation

In February of this year, Graciela Bertancud traveled to Microsoft's headquarters in Redmond,  United States , to present and share your project with other colleagues and share the transformations driven.

For 15 years, the Mendoza school has been working to improve learning and teaching processes focused on the introduction of Information and Communication Technologies (ICT) to build a learning model that can be replicated in other schools. Since 2005, the school has implemented a 1-1 model that has now been replicated in multiple schools across the country, and the initial level is already functioning in the new  school  in Guaymallén. In the coming months, the other levels will be integrated.

Four years ago, the Tomás Alva Edison Foundation created  Argentina 's first robotics and programming school, a proposal that opened its educational model to the entire community mendocina and has already been used by more than 400 young people between 10 and 17 years old.

“Schools are integrating technology into their proposals and teachers generate training projects for the future. In this context, the incorporation of technologies into classrooms contributes to generating more opportunities for young people,” said Luciano Braverman, Director of Education at Microsoft Latin America

During the visit Braverman commented that “this school is an example because it shows that it is possible to recreate education to train tomorrow's professionals. The works of the future are closer than we think,” said the executive, adding that “through the Flagship School program (flagship school or pilot) , Microsoft works globally to accompany those institutions that imagine and create new architectures that sustain deep learning and thus help all students achieve more and be better prepared for what will come.”

Tomás Alva Edison School's projects have been part of the first Latin American Forum of Innovative Teachers organized by Microsoft (2008), where he won the first place in the peer category and second in the community category. Since 2012, all faculty and driving team have yielded standards for Microsoft Innovative Pathfinder School and from 2015 to 2018, the school was assigned by Microsoft in the Showcase School category.

This model school began operation in 1992 and has initial, primary and secondary levels, in morning and afternoon shifts. Its teaching model integrates information technologies to put them at the service of people. In addition, on Saturdays there is a community-open programming and robotics school, which can be attended by children not enrolled in school and adults.