The specimen was found in an excellent state of preservation. 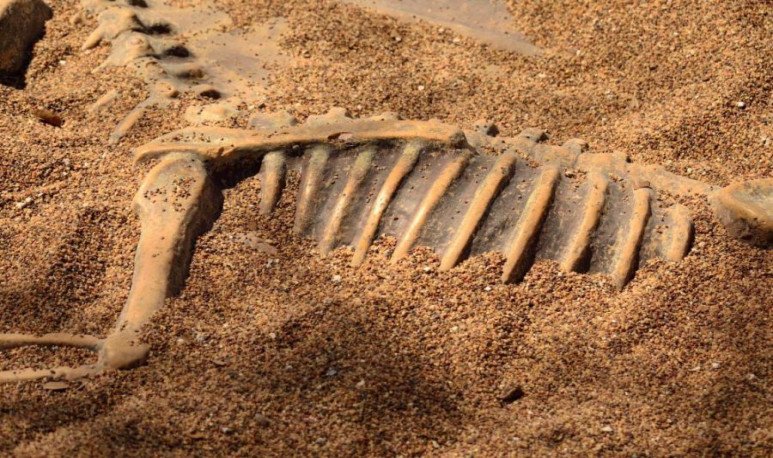 Remains of the most complete fossil deer in Argentina, where it lived 126,000 to 8,500 years ago, were found near the Buenos Aires city of San Pedro, reported the Science, Technology and Society agency (CTyS) of the National University of La Matanza (Unlam).
Paleontologists rescued about 70 percent of this animal from the Luxurian Age, including teeth, part of its limbs and articulated spine, from which they will make laboratory dating to specify its age.
The director of the Paleontological Museum of San Pedro, José Luis Aguilar, found these fossils a few weeks ago when he was carrying out a survey at the Campo Spósito site, located east of the San Pedro party.
In this area, crossed by a system of streams and streams, 24 species of mammals and reptiles of varying sizes have been found in the last 17 years, the report notes.
“ The first thing I could see was a fragment of one of the femurs,” Aguilar said, and said that, the next day, he returned with the Museum team and, after a week of tasks, they managed to “rescue much of the body of this deer belonging to the genus Morenelaphus, from which only knew fragmentary remains until now.”
The team that performed the rescue tasks in Campo Sposito was also composed of Matías Swistun, Julio Simonini and Gabriel Tettamanti.
“ The specimen has an excellent state of preservation and will be identified from its teeth” and “cranial and postcranial elements, which is a novel feature since fossil deer are historically identified by their antlers,” said researcher Germán Gasparini (Museo de La Plata - Conicet)
This type of finding “provides the possibility of conducting research with a comprehensive approach”, in which Dr. Nicolás Chimento and researchers from Brazil, Spain and the United States will also participate, he valued.
Gasparini pointed out that these specimens could reach an estimated weight comparable to the living species of red deer, up to 200 kilos.
“ It was a medium to large herbivorous animal, which was extinct along with all megamammals and a large number of large mammals some 8,000 years ago,” he said, “when it was not able to overcome the alterations” in vegetation by “successive climatic changes” and upon the arrival of the human being”.
Chimento explained that they now compare these fossils “with extinct and current genera” and that they observed “quite clear differences that will allow to infer details of their diet, size” and other aspects.
“ It's amazing to see how his spine and neck remained articulated in 'life position',” Aguilar said, adding: “Without a doubt, this little animal comes to tell us details of a moment in our prehistory where the atmosphere he inhabited was quite different to the current”.