Home Argentine Knowledge Did you know that in Argentina they inhabited the largest dinosaurs in the world?

A group of researchers, led by the National University of Cuyo, recognized “a new lineage” of giant dinosaurs in our country. 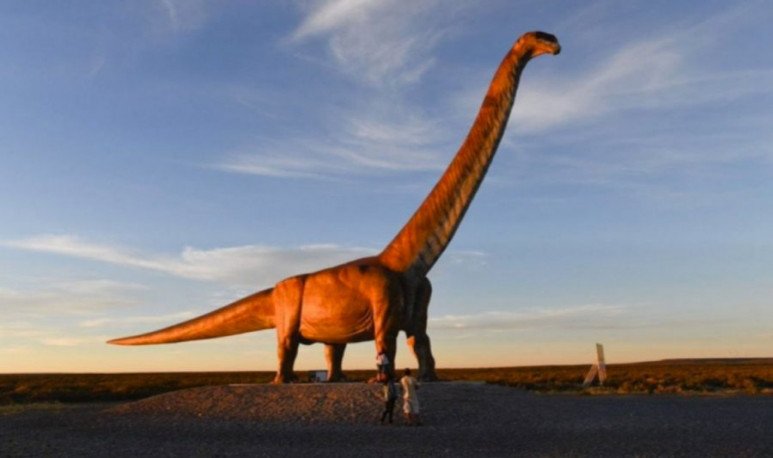 They were called  Colossosaurs , which include the world's largest dinosaurs with the heaviest body mass ever known,  between 50 and 70 tons.

The results of different analyses and studies, which were already published in the prestigious journal  Anais da Academia Brasileira de Ciencias  reaching much of the community international scientific  ,  point out that the Colossosauurs included the heaviest terrestrial animals ever known,  with masses maximum bodily bodies reaching 50 to 70 tons. Like the Argentine forms  Patagotitan, Argentinosaurus, Puertasaurus, and Notocolossus , the latter with a 1.76 m long humerus, the largest humerus known for this group.

The relevance of this recognition is not only in the extreme body size of these giant  titanosaurs  , but by the biological adaptations they involve, which are complex.

“The contribution lies in synthesizing the anatomical knowledge that one has of titanosaur sauropods, with special emphasis on their phylogenetic study, that is, in kinsmen. From this group we are striking the great diversity. A group of them were  really giant and that is what constitute a challenge for paliobiological models related to physiology, locomotion, growth, feeding and reproduction rhythms. The important thing is that we have now identified this group and we have given it a name,” said Bernardo González Riga, researcher at CONICET  and director of the Laboratory and Museum of Dinosaurs at the Faculty of Exact and Natural Sciences (FCEN), from where they led the studies. Specialists from different parts of the country, as well as from the United States and Brazil participated in them.

González Riga, who with his colleagues from different parts of the world  in  Mendoza  found and named 4 species of dinosaurs , said that these studies of phylogeny review and analysiseacute; ticos emerge as a synthesis of two decades of scientific study thanks to the formation of the team of the Laboratory and Museum of Dinosaurs, composed among others, by professionals Leonardo Ortiz David, Juan Pedro Coria, Belen Tomaselli, Claudio Mercado and Germán Sánchez.

“The phylogeny of titanosaurs is a controversial issue since  every year new species are found in the world and their diversity is really amazing . Both in size, and in forms and adaptations,” explained González Riga, who specified that there are no  extrinsic (environmental) factors that explain gigantism and that the attention of  paleontologists  derives from the fact that these extraordinarily giant carvings were largely superior to that of extinct mammals (mammoths, rhinos) or any other vertebrate land.

Among other details,  UNCUYO  described that these dinosaurs developed very long necks (up to 12 meters) and small heads; a reproduction by eggs (oviparous); high growth rates during the early stages of life and a breathing supplemented with airbags similar to that of birds. All these unique characters in evolutionary history would have led to an increase in body mass.

“The knowledge of the large animals that inhabited the remote past and their extinctions, serves to better understand the current adaptations of vertebrates and their fragile relationship with environmental and ecological changes,” the researchers added.

How was the discovery?

The study that allowed this name was carried out on the basis of a  comparative anatomical analysis and application of computer software (TNT program) that process hundreds of data to obtain cladograms, which are phylogenetic hypotheses of kinship in the form of “groves andrdquo; based on shared characters (synapomorphies).  And it was achieved by applying heuristic searches with parsimony criteria and then comparing with previous studies that reached similar results.

The analysis was led and coordinated by González Riga, who is also a professor at the FCEN- and the team consisted of the following  paleontologists:  Matthew Lammana (curator of the Carnegie Museum of Natural History in Pittsburgh, United States), Leonardo Ortiz David (CONICET researcher, Professor at FCEN and General Coordinator of the Dinosaur Laboratory and Museum), Alejandro Otero (researcher at CONICET, Museo de la Plata, Buenos Aires), Lucio Ibiricu (researcher at CONICET-CENPAT, Puerto Madryn) and Alexander Kellner (director of the National Museum, Rio de Janeiro, Brazil)