Capsules against COVID-19 in San Juan

Sanjuanino engineers created a capsule to transfer infected patients and protect health personnel. This invention became a key tool against the virus. 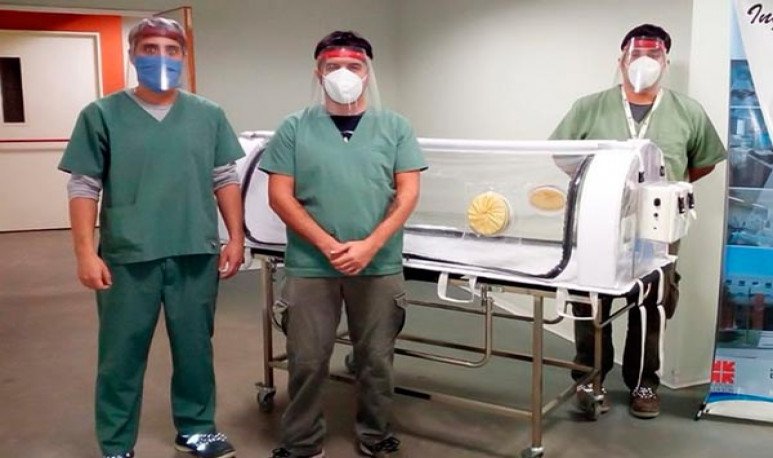 The pandemic and the arrival of a new virus made our creativity enhanced with the instinct for survival.   This was reflected in the province of San Juan, where and Engineers at Rawson Hospital created a very particular tool.  This group of professionals manufactured a  simple to use and low cost capsule that allows patients with COVID-19 to be transferred. The idea arose around the need to move them in a way that is safe  for health personnel .

This is because the  constant exposure of physicians with positive patients is one of the main concerns in medical institutions. Because, with the increase in cases of COVID-19, it takes greater dimension , and  the risks are increasing.   Faced with this situation, the Sanjuaninos decided to give  an effective and intelligent response  . With the new tool it is possible  to reduce the risk of contagion of health personnel  who are in direct contact with positive and suspicious cases.

The work was the  team of technicians and bioengineers from the Clinical Engineering Service of the Guillermo Rawson Hospital.   Those who developed this  biosegure capsule that revolutionizes the world of medicine.  So far, fifteen units have already been delivered to health centers in the province and  their cost is three times lower than imported.   This  facilitates their distribution  and contributes to social welfare.

In the words of experts

Luis Pulenta is a  bioengineer graduated from the National University of San Juan (UNSJ)  and became coordinator of the project. On the situation, he says:  “Before the pandemic, there were no such developments in Argentina.    These capsules have several advantages , such as low cost, simplicity in use and the possibility of folding it to make it  easier to transport and storage.”

The importance of technology

The members of the Clinical Engineering Service are dedicated to  preventive and corrective maintenance of medical equipment . In addition, they are responsible for  the design and development of projects,   based on research  that contemplates  the needs of health personnel.   In this regard and in this context,  their role becomes indispensable.

The capsule was one  of the first identified needs . Around that, the first thing they came up with was to place a kind of  mechanical barrier on the stretcher.   They made four different prototypes and, in turn, were adding other functions to it: they added a  viral-bacterial filtration system  and made it with  a foldable design.  Finally, the product was converted into a capsule is transparent PVC , has a lateral opening for patient admission and fits the stretcher with rebeatable aluminum supports.

The invention is also  negative pressure: air enters from one end, where the patient's feet are located, and is expelled outside by the other, in which the  filtering system is located.    The circuit is powered  by  an internal battery that allows 12 air renewals per hour  and an autonomy of two hours. In addition,  it has a hole for medical personnel to perform the necessary procedures  through it.

The project was selected  in the  IP-COVID-19 Call  and obtained  funding from the National Agency for the Promotion of Research,    Technological Development and Innovation (R&D+i Agency) , through the  Argentine Sectorial Fund (Fonarsec) , within the framework of the Coronavirus Unit that integrates the Agency together with the  Ministry of Science, Technology and Innovation of the Nation and the Conicet.

They are currently  tracking the operation of the capsules  to identify more aspects that can be optimised.  “ For us, the project does not end when we deliver them. We still have to do a satisfaction survey among those who are using it, but the return we had was very good,” said the engineer, and told the media that they are  working on other developments ,  aimed at meeting  the needs of health institutions. But they also continue to think about  ways to optimize the biosecurity capsule.

Applause for these researchers!

Bernardo Houssay: my country will be a scientific power

Education: teaching to be expendable, sow the seed of self-management