Home Argentine Knowledge Astronomer of Conicet La Plata, part of the team that observed the formation of stars

Manuel Fernández López was part of the revelation of a clash between two huge jets of gas. 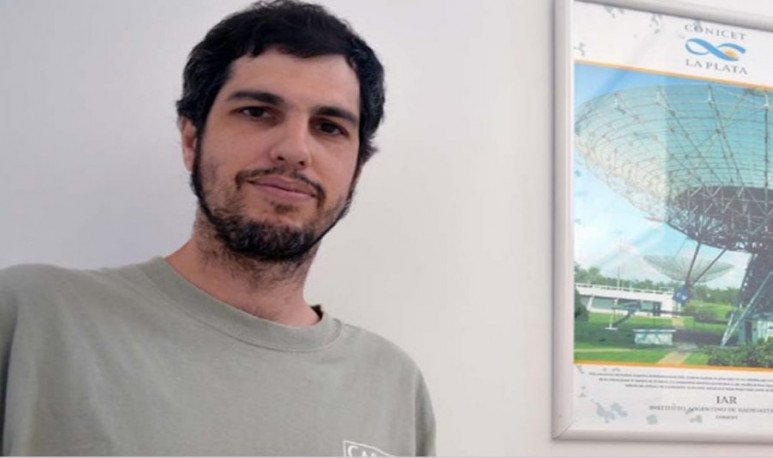 An astronomer from Conicet La Plata participated in the revelation of the image of a collision between two giant jets of gas, several light years long, during the formation of stars, said the platense organization in a statement.
Manuel Fernández López is the assistant researcher of the Conicet who was part of the revelation of a clash between two huge gas jets called molecular flows, several light years long, a novelty that has just been released in The Astronomical Journal.
The data that allowed researchers to demonstrate the collision were obtained by the ALMA Observatory, a set of 60 antennas located at 5,000 meters high in the Atacama Desert in northern Chile.
Focused on the study of the behavior of star formation in a region of the Universe located 500 light years from Earth and known as BHR 71, an international team of scientists led by Luis Zapata of the National Autonomous University of Mexico, discovered that two molecular flows launched from different points cross at high speed.
“ Star formation is a process that takes about 10 million years, and the emission of gases in the form of a jet occurs at an early stage: about 10,000 years after the beginning,” said Fernández López.
“ The birth of a star begins with huge amounts of gas and dust that are in space and that at one moment collapse by its own weight and are concentrated in the center because of the force of gravity,” he said and explained that this attraction “shapes a flattened disk that spins great speed, and in which more and more material is attracted, where is gestated what will be the brilliant star”.
But in such a movement not all gas and dust is absorbed by the center: the fastest going particles come out perpendicular to the disk and up and down. Those ejections are jets or molecular flows.
“ They come out hundreds of kilometers per second, and can measure tens of light years, far exceeding the average distance between two stars, which is 4 light years. They are very brilliant,” said Fernández López.
The observation in the new study shows what is happening between two of these emerging stars, which have a long time to become such.
In addition to being a curiosity never before photographed, the finding is important for the study of star and galaxy formation.
“ By the force with which they travel, molecular flows cause turbulence. In space there are clusters of matter that are necessary to give rise to new generations of stars, and precisely the agitation of the jets could disperse them, which would reduce them in proportion,” concluded the researcher.