Before being distributed and exported, stored peanuts may suffer the attack of fungi and other pathogens. 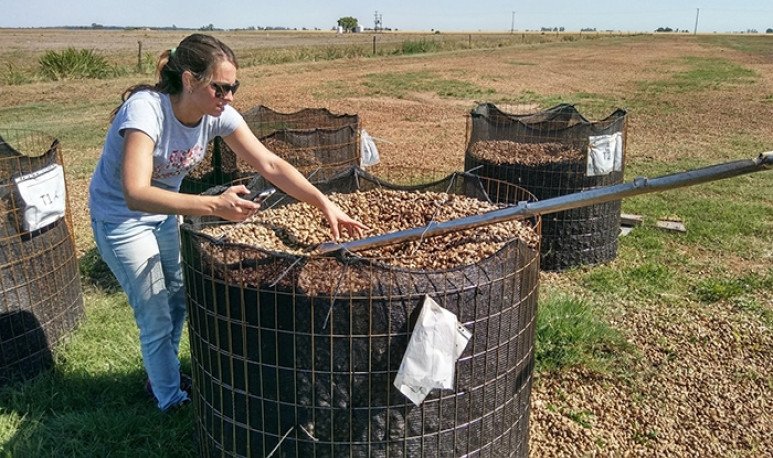 Researchers at the National University of Rio Cuarto and CONICET proved that the strategy can prevent different pathogens from affecting the quality and taste of that product stored for long periods of time.

Before being distributed and exported, stored peanuts can suffer the attack of fungi and other pathogens, thereby losing its quality and being able to be a vehicle for toxins that are risky to human health.

Now, scientists from the National University of Rio Cuarto (UNRC) and CONICET developed microcapsules filled with compounds that protect that food from all these adversities.

“Our strategy could be applied to peanuts destined for export which is stored for long periods of time. In this way, the combination of good hygiene practices with storage treated with our microcapsules could guarantee a safe peanut of good quality and without changes in its sensory properties,” said Cyta-Leloir Agency the first author of the study, Dr. Daiana Garcwas a member of the Microbial Ecology Laboratory led by Dr. Miriam Etcheverry in the Department of Microbiology and Immunology of the Faculty of Exact Physico-Chemical and Natural Sciences of the UNRC.

As the journal 'International Journal of Food Microbiology' reveals, Etcheverry, Garcia and a team of colleagues developed microcapsules made with harmless materials such as unflavored gelatin and gum arabic. And inside they incorporated a food grade antioxidant, hydroxybutylanisol or BHA, for its acronym in English.

This formulation was then applied on a large scale in two peanut gathering companies in the province of Córdoba, in the so-called “manisera nucleus zone” of Argentina. It was found that it protected BHA from oxidation by contact with environmental factors during the five months of storage. And that managed to reduce between 15 and 30% the contamination by yeast and fungi Cladosporium, Penicillium, Fusarium, Alternaria and Aspergillus.

As an additional advantage, scientists did not detect certain carcinogenic contaminants produced by fungi, aflatoxins, in treated peanut samples.

The analysis also revealed that the taste of peanut grains was not affected by the formulation used and insect damage was always less than 3%. It also did not affect the acidity and sensory properties of the fruit. “These results show that BHA formulation could be transferred to the productive sector,” Garcia said.

Cordoba produces more than 90 per cent of peanuts nationally, and of that figure, more than 90 per cent is also exported to major global markets. In 2015, the sector generated a foreign exchange income of US$800 million, according to data provided by the Argentine Chamber of Peanuts (CAM).