Home Argentine Knowledge A skeleton over 100 years old, in a family home

The skeleton was found in Neuquén. It would be a woman's and is considered to be of high patrimonial value. 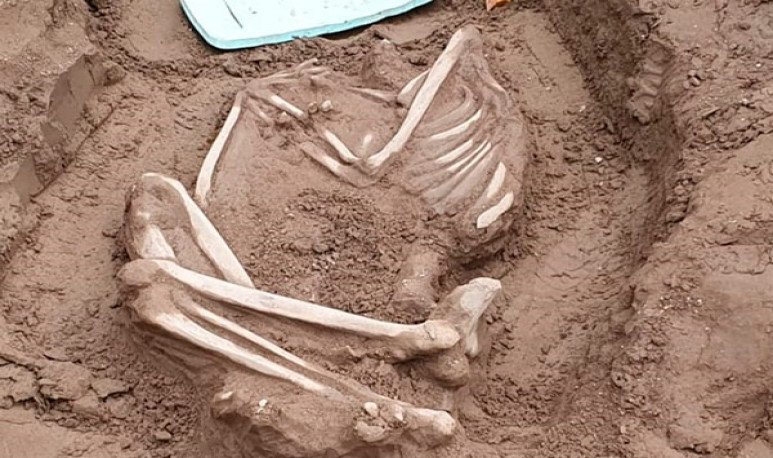 Last September 14 was a very special day for the Neuquin community. In a homestay, a group of workers carried out a construction on the part of the courtyard used as a mechanical workshop. The idea of raising a bath there seemed simpler than it turned out. In the courtyard of the home, located on Calle Lanín at 500, the masons found something that will change the history of Neuquén: a piece of jaw and a skull protruding a meter of excavated the ground  .

Initially, the finding was investigated by the criminal police. The fact that the land belonged in ancient times to a military man put the experts on alert for a potential disappeared.  When the forensics arrived, they found the entire skeleton and realized the antiquity and value it possessed . Quickly, teams of paleontologists from the  National University of Comahue and the Provincial Directorate of Heritage came to the site.

Attorney General José Geréz reported: “We can say that, in principle, we are dealing with   remains  of old data, which would be of interest  archaeological  by other elements that were found around .”From certain characteristics of bones, specialists were able to further specify what this finding was about:  “The size of the hip indicates that it is a woman's skeleton , now we need to send a sample to England or the United States for determine more data,” explained Carlos Cides, Provincial Director of Cultural Heritage.

Depending on what is found in this skeleton, various theories about Neuquin ancestors can be confirmed or ruled out . One of them refers to the fact that the former inhabitants of today's Neuquino territory were nomads. The movement they apparently made was along the banks of the rivers in search of food. This theory would have strong acceptance in the anthropological world and the recent finding of another skeleton on the edge of the Rio Negro further reinforces it.

Another story about the Neuquino territory has a little less scientific support.  It is said that the extent of land on which the Neuquin capital was founded would be occupied by a Mapuche  cemetery   . Various paranormal events are justified from this story. Obviously,  the discovery of  ancestral skeletons could also reinforce this legend.

One of the most outstanding features of the province of Neuquén is the number of  places considered “sites of interest and archaeological and anthropological heritage ”. There are approximately 70 and  the remains found there date from 2000 to 12,000 years ago.

Archaeological heritage refers to any material evidence from which the behaviors and activities of prehistoric societies can be inferred. Neuquén has Act No. 2184/96 protecting historical, archaeological and paleontological heritage, and the Provincial Directorate of Cultural Heritage is the implementing authority.  Cides emphasizes the importance of finding such as those on Lanin Street to be immediately informed : “If something happens, you have to call the police, the museum or the Provincial Directorate of Cultural Heritage,” says the director.