The chimentio overoraptor, the new dinosaur species found in Patagonia, surprises with its unique features. Find out what they are! 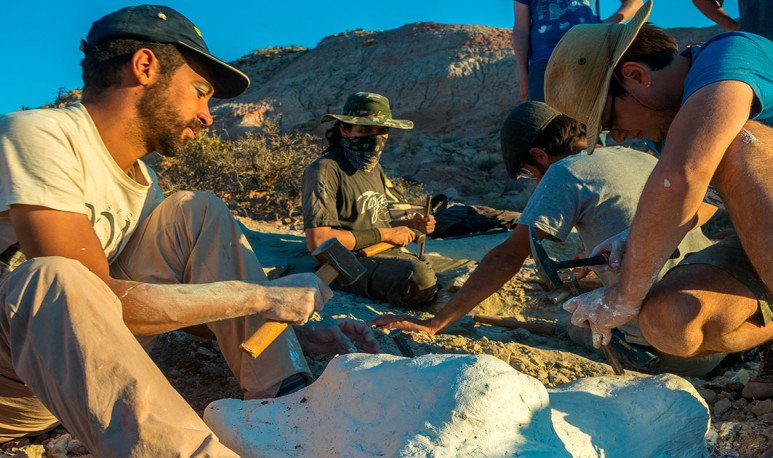 A group of researchers found in Patagonia fossil remains of a new species of dinosaur that lived long ago.aacute; s of 65 million years in those lands . A real gem of our prehistory!

This finding opened the debate about the kinship that existed between groups of predatory dinosaurs (with fossil remains of at least 5 different families) and the birds(species that did survive and is all over the world).

In February 2018, in the Black River Province, they found a new species of dinosaur: they called it overoraptor chimentoi. The remains were found on an ancient rock 90 million years old. The paleontologist in charge of the expedition was the Argentine Matías Motta, who participated on behalf of the National Council of Scientific Research and Tea(CONICET).

By 2013, remains of the bones of a hand and claws of the dinosaur had already been found. It was an expedition made by the technician named Marcelo Isasi, with Dr. Fernando Novas in the company of some colleagues.

After 5 years of the discovery of Motta, National Geographic joined in collaborating with this expedition and the research project. On this occasion, vertebrae, part of the shoulder girdle and pelvis were found. Also some bones of his legs and wings. Thus, with the collected body parts, it was possible to identify unique traits in the anatomy of the dinosaur that could be compared to others.

The origin of your name

This dinosaur was named overoraptor chimentoi. The term overo resulted from the shape of its own bones, which were preserved in black with white. In the case of chimentoi, by Dr. Nicolas Chimento who was the person who found the first remainsof this prehistoric species.

As the researchers could see, it was a small dinosaur measuring approximately 1.5 meters in length.His legs and arms were long , with fragile bones , characteristic similar to those of a runner . His claws were sharp and curved on his second finger.In addition, the bones of his arms were similar to those of birds .

Despite its unique features, different from those of other species found in Patagonia, it has been determined that it was a raptor. It was probably very similar in appearance to ñandú and, although it had a similar structure to that of birds, it is believed that it could not fly. Without a doubt, scientists now have a lot of material to continue researching on this new discovered gem.

Once again, our land reveals to us new mysteries of the past. Our Argentine scientists have the grip and the preparation to carry out expeditions of this kind. A news to feel proud Argentinian!