Summers in the city have a long tradition. In a summer season with 75% of Buenos Aires without leaving General Paz, hosguerazos from the past relieve. 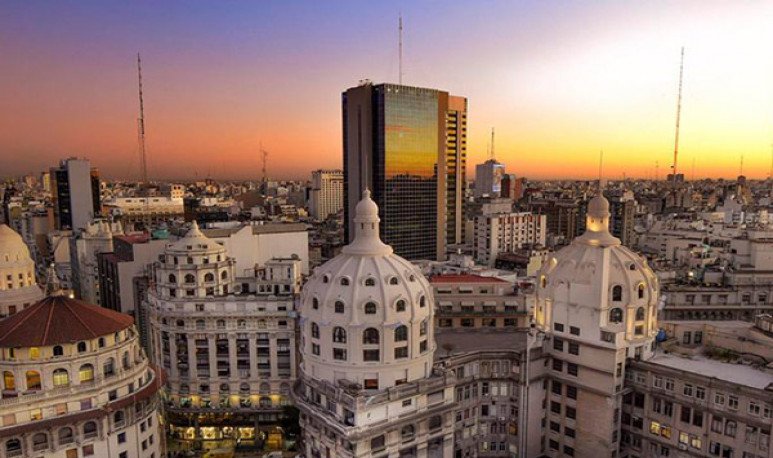 On December 11, 1918, President  Hipólito Yrigoyen,  and the entire cabinet, presided over the opening of one of the most anticipated works by the Porteños for decades. The heats of the elevated thermals of the nine hundred were still impregnated in the bodies, which forced the municipality to ban urgent baths in the river due to the nudity of some and some.  During the management of Benito Carrasco (1877-1958) in the direction of Paseos it was decided that at last Buenos Aires would recover the river . A dead-end port to the sea. And José Quartino, the radical minister of public works, completed the works of the  Paseo de la Costanera Sur, which included not only the current pergolas and gardens but also free football and tennis courts.  One hundred thousand people, the blessing of Monsignor Alberti, the hymn and twenty-one cannonazos, gala and pomp, and thousands of instant dips that inaugurated the first official resort of Buenos Aires, before the Balneario de Núñez.Carrasco, a disciple of landscape designer Carlos Thays, alarmed warned the press, “let us establish that the name designated by Municipal Spa is inappropriate... it is not a spa in the strict sense of the word, but a walk provided with some modest and small facilities for the bathrooms.The porteños didn't listen with the mesh on.  And on the edge of the Rio de la Plata grew a recreational and tourist complex, with dazzling restaurants and shows, and that was the hotbed of great artists such as José Marrone and Mariano Mores. Until well entered seventies even bathers wet their parts with “heat”. Pollution and military dictatorship again denied the water sources of the porteños. In the two thousand new urban interventions they tried to return the shine to the Paseo de la Costanera, now driven by private investors in the brand new CABA neighborhood, Puerto Madero. A little bit of his popular soul returned then with the crowds visiting the promenade and the Ecological Reserve. But the fresh, the fresh real, the relief in the waters of mother Rio de la Plata, remained in the anecdotes of grandparents and grandmothers .

From the first dip of 18 to the sandy beaches, and plastic chairs, available in today's public spaces, we Buenos Aires attended several proposals to mitigate the high temperatures. And offer recreational alternatives to those who choose, voluntarily or unfailingly, to vacation in the city.  The swings of the South Coast serve as an example of the scope of public and private initiatives that tried to remedy that feeling against which nothing can be done.  Because if it's cold, I wear triple stockings, but in the heat you don't have to get out of it - unless you're camping under an air conditioning, of course.

True, it was a concern from the beginning for Argentine rulers residing in a suffocating and overwhelming colonial city, according to the first chroniclers and travelers to El Plata.  Sarmiento can be considered the forerunner in giving the city a respite, with its policy of massive tree planting in neighborhoods, prototypes of park neighborhoods, and especially the Tres de Febrero Park “ amidst the amazing development of the city miss a park that will give the city the population so great ornato and comfort that the Bois de Boulugne, Hayde Park or New York Central Park offer the village. The province has land, happily, in one of the suburbs of the vast territory that the tyrant -Juan Manuel de- Rosas monopolized by consecrating public funds to surround his abode with a deserted extension and for his service only, which fell into the public domain, reintegrating to the State the flows that had defrauded,” said the procer Sanjuanino before the Congress of the Nation. Resisted the initiative at the time, in an interesting discussion at a distance by many superstitious and prejudiced arguments that were then heard in the instaurations of Parque la Memoria and Ex Esma, hygienist and writer Eduardo Wilde, causally relative of whoever was the creator of the first Buenos Aires park, provides scientific endorsement on the feasibility of  the project and President Avellaneda inaugurates it with an attendance of ten thousand people, one third of the Buenos Aires population.  Today the first lung of the city, along with its twins from Parque Avellaneda and Parque de la Ciudad, receive thousands of families fleeing to the green as soon as the thirty-degree ramp climbs.

I take out my sack and I don't wear the wear

While over the last decade it has thermals close to 40 degrees, and orange alerts are activated, heat, which is said extreme heat, is recorded in a number of times within citizen history. We're talking about when the needle exceeds 40 degrees. Since there were statistical bases from 1872, by a measure by President  Sarmiento  that created the Observatory and Meteorological Office, by the American Walter Gould Davis, only count five opportunities that surpass a suffocating mark.  On January 24, 1923, the first record is experienced with 40 degrees at three o'clock in the afternoon and the porteños flock in Malón to the Costanera Sur and Palermo.  The newspapers of the time testify to crowded squares and walks and a lack of ice, an object of luxury until the arrival of home refrigerators in the forties. The Bieckert ice factory, the first in the country installed in 1860, worked piecework for a whole week. By January 18, 1943, a tenths over 40, the porteños had some refrigerators, few in truth, and electric fans of all kinds, even battery-powered. Better than in 1935 that the Villa Ortúzar observatory alerted a hell of almost 41 degrees at four o'clock in the afternoon and, in historical figure, it came to exceed one million liters of water in one day.

Similar was the situation in 1995 when he stroked the 41 degrees again although the city never lived the incendiary mantle of January 29, 1957. To crown a month that exceeded forty daily that day, it was nailed to 43.3 degrees  “The population of Buenos Aires” -rescues José Luis Scarsi in the daily Clarín- endured a daunting day yesterday with a maximum temperature of 43.3 degrees, low pressure and high levels.ndice of ambient humidity, circumstances that contributed to give the episode dramatic faces. The various care services had to help 95 people who suffered the effects of heat, 15 of whom were serious last night and eleven died in this capital.” Unusually shirt-shirts officers, office workers in muscular shirt and rolled up pants, employed in almost transparent dresses, in a day when the conurban had peaks of 45 degrees. This never again repeated record, which made the traditional Confectioneries El Molino and La Helvetica deliver  thousands of bottles of non-alcoholic beverages  and beers versus less than ten coffees, produced countless water and electricity cuts in various neighborhoods. Fortunately the following day it recorded a drop of almost twenty points, also one of the biggest differences in Argentine history.

Luckily the humidity remained flammable in these days below 30% and far from the historical average of 60% in Buenos Aires.  Because with the average humidity, the thermal feeling, the one that comes with increased humidity and the impossibility of evaporation of sweat, the real natural coolant, would have taken us quietly to 55 degrees.  And we would be among the first in the world as California with 56.7 in 1913, or Al' Aziziyah, Libya, with 57.8 in 1922. In the country, the temperature record turned a hundred years: the Cordovan Villa Maria in 1920 scored 49.1. So Buenos Aires, as is repeated in your sidewalks with tango litany, what kills is just moisture.

They painted the fifths (for few)

Before the miniturismo was an option for the Buenos Aires in the mid-sixties, and the explosion of the campsite, the famous getaways less than a hundred kilometers away, the fifth houses preceding the desire for a little green. In 1869 a new railway service was reported, “trips to Floresta and will offer amenities to those who plan to go summer to the beautiful village of San José de Flores” It was the times when for a trip to the west, or north towards San Isidro, he said goodbye in the way of a voyage in the Trans-Siberian.  With the alluvional arrival of immigrants, and the consequences of Yellow Fever, the fifth of the aristocracy flourished in Flores, Floresta and Belgrano, following the example of the Fifth of Fair Mackliney, today Lezama Park.  Prestigious European landscapers won twice as much as in Paris adorning the green summer plots from San José de Flores to Lomas de Zamora and San Isidro.Just in Flores, next to the square, was the fifth of the Güiraldes, the usual summer space of Carlos Pellegrini “Surrounded the house an extensive park “, notes Oscar Troncoso, “where rare flowers, trees and imported plants abound, in whose shade, in comfortable wicker armchairs, the trees and imported plants abound in comfortable wicker armchairs.eacute; guests had tea with tasty homemade cupcakes while talking for long hours about the facts of the family, the area, the country”, closes the semblance of a stunning fifth that competed in luxuries with the nearby Escalada and Terrero. From that time of tree-lined evenings, and peaceful orgels twenty minutes from Plaza de Mayo, remains only the colonial house of Marcó del Pont, in front of the Flores Station. The middle classes that arrived in the neighborhood in the nineteen hundred imitated on a smaller scale the houses with gardens and, still, some perfume the walks of the porteño unsuspecting. Just like the girls from Flores de Oliverio Girondo.

The poet Rafael Obligado, who enjoyed the gigantic fifth of Catalina Rodríguez Peña de Cazón, one that occupied several blocks from the current Callao Avenue towards the river, sang with nostalgia, “Oh campestres walks/Oh manjars/Never cried what is owed now/Oh ancient simplicity and welling,/health a time of the Lares homelands/Oh my sweet porteña, beloved me/there are no longer violets or wild blackberries /they fled from childhood the sweet and joyful hours when God wanted” Rather it were ordinances of Torcuato de Alvear that began to eradicate the centric fifths from 1880 onwards. And the picket of progress.

Several parks in the city, Parque Rivadavia, the former fifth of the Lezica that retains some of the glory of the old ferris wheel in the current dry fountain, or General Paz Park, with its artificial lagoon created by the nephew of Cornelio de Saavedra, Don Luis, also recover relevant data from the ecological history of Buenos Aires, in its centuries-old trees and diversity in flora. And, most of all, the feelings of generations of porteños who escape from the relentless thermal and want a happy holiday at the door of their home.