Home Argentine History To the drums: from candombe to murga

A fundamental contribution of black culture to Argentina is the murga, which from the Rio de la Plata spread to every street and popular square with the ancestral tantan. 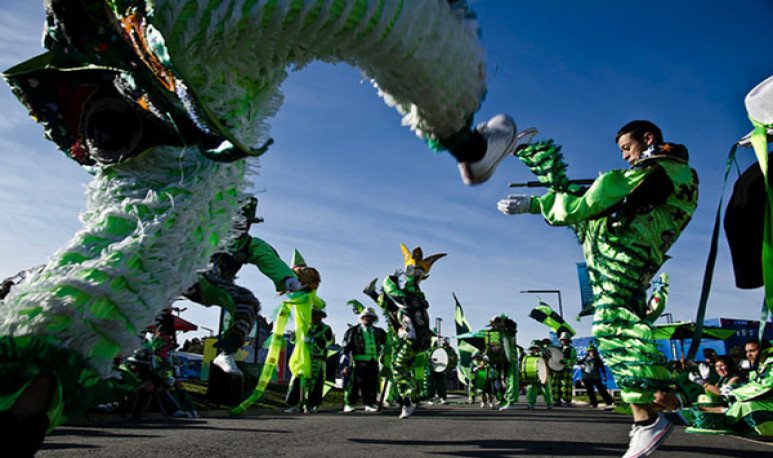 Black thing . Thus the candombe and murga was born in the distant Colony, around some religious celebration, and when slaves were allowed a little relaxation mitigating their humiliating condition. Vicente Rossi in “Cosa de Negros” (1958) transports us to the mist and dust of the village of Buenos Aires, “an old black man jumps accompanied by a scream and remains motionless on one foot, shrunk the body... he surrends himself to a series of jumps, turning on himself, lifting his legs alternately... other blacks rush to approach the one who is dancing, some go marking the compass with their legs until they reach it, in a few moments surrounds it a circle in which the order of placement are many who dance and sing in the same way... the dance of the race, which is the voice of the native terroir, which is the flag in harmonic syllables”, and dancer, we add to the quote of Mauricio Kartun, and which is still vibrant in the Buenos Aires murgueros of the last four centuries.

In the anteroom of the  May Revolution  blacks are organized into nations, according to the respective African tribes, and candombe gives color to a monotonous city. Before  Isidora Duncan and Charly Garcia , they transformed the hymn into a popular festival for the horrified patriots of 1822 and reloted old viceroyalty bans, “all under penalty of flogging and jail”, despite the emancipatory measures of  the XIII Assembly . Anyway, it doesn't matter. In the suburbs of the South, there in the Mondongo neighborhood, there are carnivalesque guerrillas of blacks with their figures, the broom, the current director of the murga, the lewd belly, and, the first bombings of vegijas of cow, or ostrich, weighing about four kilos! The clandestinity of these first candombes ended in 1828 with the rise of  Juan Manuel Rosas  along with his two allied forces, the black and the gaucho. This new circumstance in the political arena, a subject of endless ideological and historical discussion, shows that blacks organize without prohibitions or discrimination their candombes with names like Congo, Mozambique or Mondongo, names of neighborhoods, just like today. “Tomorrow and Saturday and I have to take my wife to the candombe/polque goes Don Juan Manuel” sounds thunderous from  La Boca to Plaza de la Victoria —current in May-.  Obligated by the Anglo-French blockade in 1844,  Roses   forbids carnival, and avoids invading infiltrations that take advantage of popular celebrations. The winners of Caseros extend the restriction and encapsulate the comparsas to closed places. And when in 1869  Buenos Aires  decided to organize the first municipal corso for a young nation, “there would be no more missing,” said the newspaper La Tribuna, “than to please half a dozen donkeys, who likes to ride from sidewalk to sidewalk, the wonderful idea of the Chief of Police” Despised and decimated, remember the  entire battalions of Buenos Aires blacks  who die in the first lines  of the Paraguayan War,  begins the slow assimilation of the Candomber culture among the Creoles and immigrants.

Negroes not so black

In the nineteenth-century rales coexist the assimilated black culture and, another, that resists with combative candombes, “Penitentes Candomberos” or “Primitivos del Sud”. However, it will be imposed beyond the suburbs the comparsas of false Negroes, children who smeared their faces in black to escape a repressive morality, the Spanish and Italian immigrants comparsas, the famous Fishermen's Society with its Garibaldian red shirts, the murgas of the Indians, some rivoltosos compadritos and malevos the rest of the year, and the native centers, the primitive peñas with carnival spirit, yerra” or “The grandchildren of Cacasutas” the best known, and where  Carlos Gardel would debut. And the corsican is transformed into a flourishing industry of cotillion costumes and articles, so much so that Buenos Aires becomes the main importer of serpentine in the world until the municipality decides to ban it because of traffic accidents.  President Roca  's Interior Minister intervenes although the importers finally beat and the streamers rain. Such is the size of these corsuses of comparsas and murgas, almost no candombes, that for the  centenary  celebrations there are 25 corsuses in the central district and it is celebrated in 150 blocks.

In this carnival mix, assimilating the dance of the black race, was tango. One of the main composers for the comparsas was  Ángel Villoldo , the author of the immortal “El choclo” Very active in the neighborhoods of the South, quarterer in the barracks of Montes de Oca and attraction of the cafes and brothels of La Boca,  Villoldo rescues the lunfardo and ldquo; farra” in its true festive root, “Farrists we drink/How short is life/And happy toast/To the Carnival/The crazy goddess/To all invited it/And we just must/Drink and dance/It is a very skull farrist/Girl worship/Always in farra, where you want/They will always see it, like a  milder  —señor-” Lyrics and music for the comparsa “Los farristas”, set up in 1895, and rehearsed at a conventillo on Suárez Street.  Villoldo  then composed the tango “El farrista” in 1903.

Everyone wanted to be awarded in the contests organized by the  newspaper La Prensa  and its hall,  today the headquarters of the Buenos Aires Ministry of Culture  , witnessed the transformation of the comparsas and their carts into the murgas, closer to the dance, and its songs appear unpublished double sense, “Lovers of babes well” or “Long family”, and political references that include anarchism and socialism, and there “Children of the People”

In the 1930s, neighborhood murgas exploded and proletarized with costumes including burlap and tins, “Dormidos de Slaughaderos”, “Anoviados de Palermo”, “Yanks de Villa Crespo”, among others. With the advent of Peronism we live ten years of splendour of comparsas and murgas, “bullanguera and indecent comparsas that move to pity, deny our culture (sic) and show us before the world as a primitive people,” says the candidate of the Democratic Union, Luis Mosca. After the overthrow of Perón in 1955, Corsicans were again banned, something that happened again in 1976 and aggravated, because holidays were eliminated.

When the miliars of the self-styled Libertadora Revolution went to burn all the records of Peronist marches and songs in SADAIC, they did not find “ Los Muchachos Peronistas”, the one inspired by the melodies of the boquese comparsa El Trapito in the thirties.  One version attributes the lyrics to the surgeon, footballer and politician Oscar Ivanissevich, who would resume the march in tempo murguero of Club Barracas Juniors, and which was written while frequenting Quinquela Martin's house and Juan de Dios Filiberto's studio.

With democracy, mass carnivals return to Mayo Avenue and replicate in the neighborhoods of Buenos Aires, and in the suburbs of the city. The first  Corsicans regain their place of encounter and celebration, and novelties appear such as murgas transvestites, with transgressive artists in Batato Barea and Alejandro Urdapilleta , or the first stages open to tropical music, and the debut in Buenos Aires of several very popular musicians in theeach next as  Rodrigo or Lía Crucet . An antecedent was the  Open Theatre murga , the liberating theatrical space of the Picadero Theatre, which organized in 1983 a large corso of forty blocks along Corrientes Avenue, and which twins avant-garde theatricists with carnivals.  Félix Luna,  in his role as secretary of culture from the new radical government, promotes carnival culture from the cultural program in neighborhoods, and organizes the First Meeting of Murgas  . And the documentaries “Stooges and Snots” by Eduardo Mignona, about the legendary murgas of Liniers, and “Los Fantoches de Boulogne” by Daniel Monayer, both audiovisual films that value the struggles of the murgueros against repression, censorship, plus the contempt of official culture.

In this context comes the action of  Coco Romero, murguero, musician and researcher of the genre , who since 1988 has been developing in the Rector Ricardo Rojas Cultural Center (UBA) an intense activity with workshops, publications and shows. “That first year we did it together with the anthropist and theoacute; logo Ricardo Santillan Güemes... we prepared the seminar covering the theoretical aspect and giving the voice to the murgas that returned to the carnival circuit as “The Brats of Liniers”... the young murga of Daniel Reyes (Pantera), “The kings of the movement of Saavedra” and “The xeneises de La Boca” Most of the participants became new links and continuers in recovering the murga”, says  Romero  in an appointment by Alicia Martín. Such a revolutionary educational enterprise, summoning carnivalesque teachers, gave its quick fruits and multiplied by hype and saucer by  neighborhoods ,  and squares in the country , students of Rojas workshops. The legendary “Quitapenas” emerge, some new workshopists who founded the first murga without a neighborhood. Behind them appears an unusual murguero activism since the 1950s, crossing classes, cultures and ages. In addition, glories such as Eduardo “Nose” Pérez or Guigue Mancini, among others, intrude into the performing arts and bring the murga to new artistic levels. The murga regained identity and quality. And  Coco Romero  continues as a galley and cane at the forefront of this epic of the murguero revival.

Model struggle in the Argentine Congress of 1876

Currents, with the wings of autonomy

Solis in his sauce

Reagan and Alfonsin: twinned by Alberdi and San Martin, separated by America