Home Argentine History The silent farewell of a hero

José de San Martín died in 1850. 169 years after his death, the legacy of the only man capable of being defined as the Father of the Fatherland still impresses.

General  San Martín  lived his last years in a house that did not belong to him. I rented only a flat with three  bedrooms . The main one was occupied by him. Her daughter Mercedes and husband Mariano Severo  Balcarce had been installed in the next. The third room, smaller than the other two, was occupied by Mary and Josepha, daughters of the marriage and granddaughters of the General.

With that real self-mapping that characterizes the loneliness of the great men, the grandfather of Maria and Josefa went out every morning for a walk along the coast. He had breakfast on the second of the four floors of the  house , which was then defined as a  common space.  The owner's  family  lived on the ground floor and shared the dining room with their tenants.

Ignoring the morning bustle, once he walked through the door into the street, General  San Martín  was wrapped in his thoughts. The deep sea, the seagulls that flew incessantly and the memory of a life as intense as it was difficult, allowed him to travel who knows where.

Boulogne  -  sur  -  Mer  was in front of the English Channel and some people think that his proximity to  England  was not accidental. It was in  London  that San Martin wanted to settle when he definitely left South America. There should be those old friends who had helped him build the   Lautaro Lodge  . But after the death of  Francisco de Miranda , the so-called  Rational Knights had dispersed throughout the world. Few were left in  England  and the only ones he could find were already far from his ideals. That's why he pilgrimaged in Scotland and Belgium.

It was very difficult to find a place to live. The hero who had liberated half the continent, no longer had any property. Nor did he come from a wealthy family and had denied the honors of his position. The soldiers of the independence wars received land and stays for each of their victories. Despite the defeat of Cancha Rayada,  San Martín  's race was absolutely impeccable. Then why didn't he live on his numerous rents?

One of  San Martín  's sister-in-law managed almost all of his assets and ended up scamming him by invoking an alleged investment in the Stock Exchange. The General's economy, from that moment on, went from bad to worse. He only managed to see the light when  Alejandro Aguada ,  France 's main banker, came into his life.

It seems that  Aguada  had also been  a Miranda man  and companion in arms from  San Martín  . He was in charge of the rent of the house and restored the life pension that Peru granted to the Liberator after having fought against the realistic armies. On the other hand,  Aguada  also compensated for the differences in the exchange for the income sent to Europe from the New World. South American currencies tended to devaluate.  Inflation  destroyed any profit granted in the former Spanish colonies.

Now, unlike other heroes,  St. Martin  lived every victory with a certain bitter taste. His body was unable to withstand the multiplicity of battles to which he was exposed.  Mysteriously the Liberator's health weakened while his name managed to be among the greatest in history . It's true that he owned an unshakable spirit. However, the passage of the years made pain his most cruel and constant companion. When he walked along the coast of  Boulogne-sur-Mer , he had already suffered cholera and rheumatism did not allow him to walk without a cane.

As predicting his departure he had already drafted a will prohibiting any kind of  “funeral in the place where he died.”  He also asked that his body be carried  “directly to the cemetery without any accompaniment.”  Saint Martin considered that pride was an incapacity of the useless and everything that was presumptuous was meaningless. “ Let's be free ,” he said in his speech to his soldiers before fighting in  Chacabuco , “the rest doesn't matter anything .”

Mary and Josefa, young and restless, waited every day in August for their grandfather to get up for breakfast. They imagined that his silent thoughts were waiting for him in the unfathomable haze  of the English Channel . But a sustained fever weakened Saint Martin for many days and was no longer able to get up. He threw up blood. Such a symptom had been repeated so many times throughout his life, which surely hid ancient ulcers that had never healed. Everything seemed wrong. Difficulties breathing, anemia, maybe an advanced infection. The sharp tremor of the right hand that affected him in 1818 and much more since 1837, no longer allowed him to write. Besides  gout attacks  , tormented him too often. From the age of 72, their diseases became much harder to cope than in the wars for independence.

One moment after noon, at three o'clock in the afternoon of August 17, 1850, Saint Martin exhaled his last sigh. The General's body was transferred to the Basilica of   Boulogne  -   south  -   Mer  , where was the so-called Roman Necropolis. His will would be respected by Mercedes and Mariano Balcarce until the end.

Mary and Josepha cried. They probably asked themselves a million times “why.” It was at that moment that, silent, they walked among the seagulls that used to follow the General. They were like his former armies, they went after him like soldiers with wings. Only then did they understand that their grandfather would not again evoke those ancient memories, those distant days that had revealed glory to him in South America. Now,  that man with whiskers and staff had already departed to melt into the mist of his own memory . Freed from the pain of his body, he would fight again and again his battles in our stories, in our school myths, in our iconic emotions, in everything we tell. It happens that Maria and Josefa's grandfather, had become that sad August 17, the hero that the Argentines were waiting for. 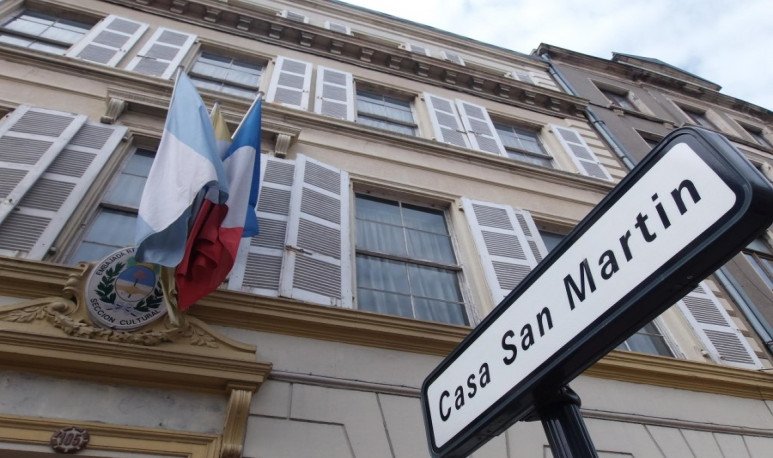 Boulogne - sur - Mer , is a coastal village located in the north of France. In front of the English Channel, it is very close to England.

Today the house where San Martín lived is a museum. It was bought in 1926 by the Argentine State. It was then paid about 400,000 francs.

The property belonged to Dr. Gérard. Saint Martin arrived there because of the revolts that had arisen in Paris that aimed to establish the Second Republic. 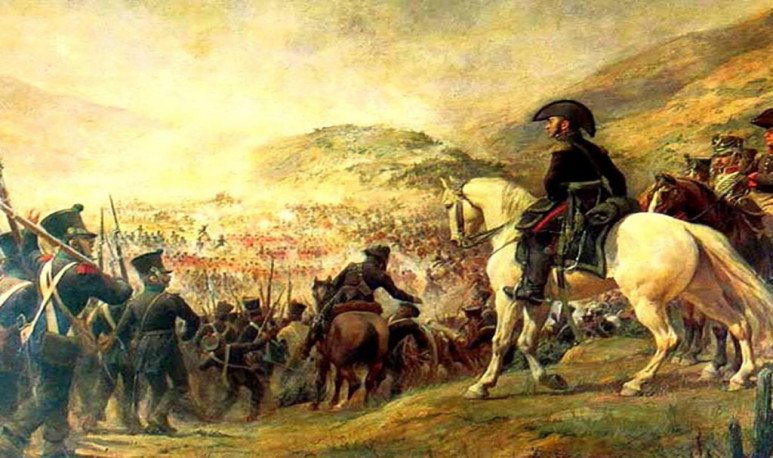 The battle of Chacabuco took place on February 12, 1817. Saint Martin's speech is still inspiring even today. “ Let's be free and everything else matters nothing,”  he exclaimed. Countries, ethnic groups, people, can all be represented in their haranga, where he warns that each of us, in the end, will be equal before death .

San Martín landed in Paracas in 1820. The struggles in Peru took place between 1821 and 1828. The independence of the United Provinces took place in 1816, however it would have been impossible to maintain it without deactivating the immense army that Spanish Monarchical Absolutism had gathered in Lima. The arrival of the Army of the Andes finally withdrew realistic forces to the mountainous region of Sucre.

In addition to the honors San Martín rejected, there was the crazy idea of turning him into the Life Vice President of Greater Colombia, a question that kept him away from Simon Bolivar forever. The Venezuelan military was trying to create a republic in New Granada with him as a “perpetual veedor,” which could have made him “Life President.”

The “ Commission responsible for the repatriation of the remains of the Libertador ” would be proclaimed by Nicolás Avellaneda. Some say it was their last attempt to achieve a certain  communion among Argentines . The pacification after the  third anticlerical revolution of 1874  and the  centralist uprising of 1880  could not be resolved. The so-called “ conciliation of parties ” never achieved its task. Avellaneda must have left his place to Julio Argentino Roca and his last act of pacification was to receive the remains of the Libertador. Today they are in the Metropolitan Cathedral.

Testament of General Don José de San Martín, preserved at the Instituto Sanmartiniano. Source: General Archive of the Nation.
An additional article asks something that unites it to Peru in a special way:  “It is my will that the standard that the brave Spanish Don Francisco Pizarro trembled in the conquest of Peru, be returned to this Republic (despite being my property), provided that his governments have realized the rewards and honors with which their first Congress honored me.”
The fourth point refers to the time of his death and the fate of his remains:  “I forbid any kind of funeral to me and, from the place where I died, I will be taken directly to the cemetery without any accompaniment, but I do wish that my heart was deposited in Buenos Aires”.

Maria Mercedes and Josefa Dominga represented in “the immortal grandfather”, sculpture by Ángel Ybarra García.
Referring to the weakness of St. Martin's body, Bartholomew Mitre said:  “It belonged to the race of heroic invalids.”  Much has been said about the diseases he suffered in his last years. Dr. Mario S. Dreyer sums up each of them very well. However, most diagnoses are historical references. Even descriptions of Saint Martin himself in his letters. Other interesting descriptions were provided by Dr. Christmann, who defined the type of cholera the procerer suffered. Finally, Dr. Aníbal Ruiz Moreno described the type of rheumatism and ruled out the possibility of San Martín suffering from tuberculosis. Our thanks for the data provided to Mario Anderie, author of “History of Celebres Deaths” (Frania, Buenos Aires, 1997).