Home Argentine History The course of the hunk saber.

The famous corvo saber was acquired by José de San Martín in London, before embarking to South America. 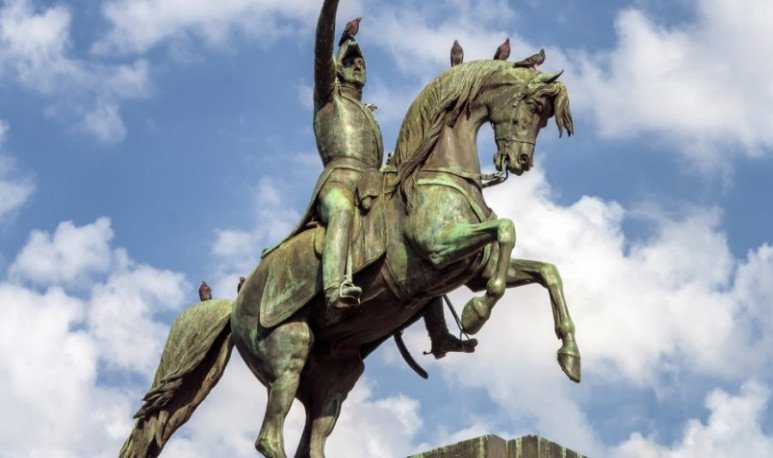 The famous  corvo saber  was acquired by General Don José de   Saint Martin in London, shortly after leaving Spain and before embarking to South America.

Saint Martin would not only use it in combat, but also arm his grenadier regiment with similar weapons, as he considered them ideal for cavalry charge attacks.

After his retirement, the gun was left in the hands of a friendly family in Mendoza . But he later asked his son-in-law Mariano Balcarc  e and Mary Mary Mary to send the sword to Europe, remaining in his possession until his death on August 17, 1850.

Before he died, San Martín bequeathed the saber to Governor Juan Manuel de  Rosas  , as proof of satisfaction with the firmly with which he had upheld the honour of the Republic in its defense against the attacks of England and France, making clear reference to the victory of Rosas in the battle of the  Return of Obligado and the subsequent English capitulation.

“El Restaurador” was going to give it to Francisco Solano López , for reasons similar to those of San Martín , and for the defense of Paraguay that the general of that country would do, but both Solano Lopez and Rosas himself They died before, so that the corvo saber remained in the hands of Manuelita Rosas, until 1897, when Minister Adolfo Carranza asked him for the National Historical Museum he directed.

There it was stolen twice by young people of Peronist youth. The first time, in 1963, with the intention of giving it to the exile Perón . And the second, in 1965. Suspiciously, in both cases the sabre was returned to the Army's intelligence services, without any arrest. After the second robbery, he was put into custody in the Grenaderos  Regiment on Horseback General San Martín , in an armored temple donated by the Municipal Bank of the City. Until 2015 he was moved back to the National Historical Museum.

Osvaldo Agosto: “I stole the saber of San Martín”

Osvaldo Agosto, who coincidentally turns on August 17, is one of the two survivors  of the Peronist Youth group who wanted to remove the party from lethargy, banned in those years, stealing an icon of the Sanmartinian liturgy.

In 1963, radical Arturo Illia won the election. However, despite his victory, the other big star of the election had been the huge number of blank votes, which actually disguised the Peronist votes as his party was still banned since 1955.

That is why a group of peronist youth militants came together to come up with a plan that “lifted the spirit.” Within that group was August, 23 years old at that time. Together with his peers they started to think ideas that would help raise morale. Several crazy ideas emerged including trips to Malvinas or France, but finally decided that  stealing the sabre of St. Martin would be ideal for sending the message they wanted to convey.

This occurred on August 12, 1963. They went to the museum when it was closed and managed to convince the guard to let them pass by inventing the story that they were students from the interior and had to return to their province that night. Once the guard opened the door to them, they pushed him and turned him into the room where the saber was.  The saber was exhibited on an octagonal table. They broke the glass, wrapped the gun in a poncho and came out.

Next to the broken glass they left a letter saying:  “To the Argentine people. Communiqué number 1. The Peronist Youth, rarely as today, points to a moral and spiritual crisis and has therefore more endeemingly committed the honor of the Fatherland and the happiness of the people. Indeed, in few circumstances such as this, Argentina's sovereignty has been so vexed, the national economy is more committed, and social justice is most denied...”  “ The Argentine people should not have any concern: the corvo de San Martín will be cared for as if it were the heart of our mothers . God forbid that soon we can return him to his well-deserved rest. May God enlighten the rulers.”

Originally, the idea was to take the saber to General Perón, but they realized it was very risky and that's why they decided to keep it. Instead  they used it as an emblem by which the activists of the Peronist Youth swore allegiance to Perón and the Movement.   Not without first covering their faces so they wouldn't identify where the saber was.

The saber is restored

On August 28, 1963, only 16 days after the robbery, they returned the sabre to the Grenadiers Regiment on Horseback.   It was wrapped in the Argentine flag and then exhibited in the central hall.

With regard to the arrests, August had been interrogated for the robbery but always denied his participation. That is why with the restitution of the saber  he was released from all guilt and charge.