Few human deeds have the dimensions of the feat of the Army of the Andes. Especially if in the ends the emancipation of a continent shone. 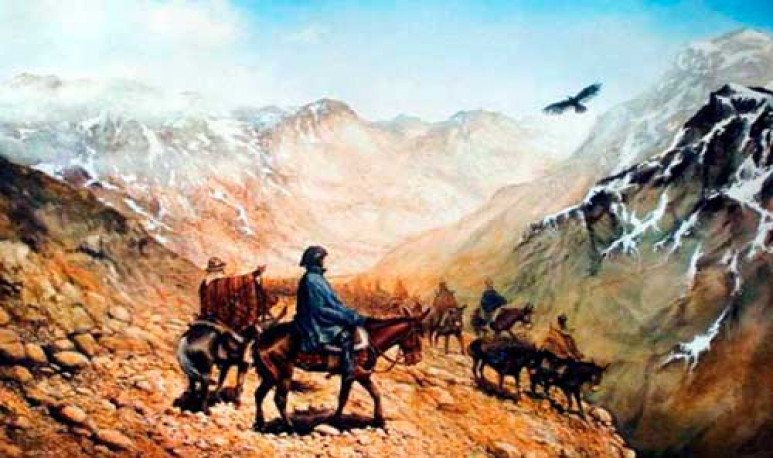 José de San Martín  had only one mission since he landed in Buenos Aires  in 1812, after nearly three decades in Europe: to liberate his American compatriots from the Spanish yoke and backwardness. And this mission force, in the wise words of historian Patricia Pasquali, will accompany all her decisions in the brief passage through  America .  Such a force was able to organize where there was no organization, either its grenadiers like the Army of the North that took from the hands of its admired Manuel Belgrano, or through mountains of doubts and resistance, as the encono of political opponents in Buenos Aires, Santiago andLime . Therefore, for him, the  Cordillera de Los Ande was another test of his iron determination, a measure of the immense magnitude of his craving for freedom. “What does not let me sleep is, not the opposition that enemies can make me, but to cross these immense mountains,” the  Liberator told a confidant.

It was twenty-eight months of preparation of the forces where the towns of  Mendoza, San Luis and San   Juan  collaborated intensively, together with Chilean emigrants under the orders of  Bernardo O'Higgins  , although many were sent to Buenos Aires because of the antagonism between them. So the bulk of that force, unusual for a country that had just declared its  independence  in 1816, were Argentines of all ages and races. While  Fray Luis Beltrán  and engineer   José Álvarez Condarco    produced weapons and equipment in bulk, the last key to the recognition of the land at the risk of his own life by being dispatch courier to the very captain general of Chile himself,  San Martín  developed a vast plan of espionage and news throughout the area in order to mislead the Spaniards. Another novelty in modern warfare tactics introduced by  General Correntino . Among them, the encounter with the Pehuenche Indians in San Carlos requesting passage through their territory, a trick that deceived the  realists  who assumed the arrival of the bulk of the soldiers through the Planchón Pass.

But, if the Spaniards of the tyrant Francisco Marcó del Pont, with a body superior to the  patriots , more than five thousand men and 33 artillery pieces, were disoriented about the plans of  Saint Martin , the execution of the plan was a coup de grace. Because to the accumulation of false information, he also planned to divide the  army of the Andes  and send minor columns north and south of the main passes of  Los Patosand Uspallata .  And when we talk about minors, we refer to the 50 children and 80 Riojan militiamen of Francisco Zelada, who took Copiapó; and the 22 children, 21 grenadiers and 80 San Juan Manuel Cabot's militiamen who liberated Valdivia and Coquimbo and captured a brig!That's just north. To the south of where  San Martín  led four thousand soldiers, more than a thousand militiamen, with war material and a month of supplies, added to 10,000 mules and 1600 horses, Colonel Ramón Freire with 80 infants and 25 grenadiers crossed the passage of the Planchón and raised two thousand Chilean dissidents in the estate of Cumpeo. Thus Freire, together with José Lemos, who commanded only 25 blandingues and 30 militiamen in Paso del Portillo, completed the master plan of  San Martín,  as the realists mobilized a thousand men to fight a ghost army. As  Churchill  would say a century later in British resistance to Nazi bombings, never so many owed so much to so few.

Along the path of  Los Patos  was the bulk of our patriots , where San Martín went while fighting his chronic pains with laudanum, and it is the mostIt is difficult to take all possible steps, with intense temperatures below zero and inside a massive cut to the contour. The entire troop was riding mules, including the grenadiers who carried their horses horned and protected with 6,000 sheepskin cushions, and the days were slow with calculated steps for the provision of grass, water and firewood. For daily feeding, charquin was adopted, a compound of sun-dried meat with hot chili pepper and fat, which with water and corn flour was transformed into a nutritious stew to withstand the cold inside the frosty hides.

The Condor of the Cordillera is coming out

In this way, with mathematical precision, four mountain ranges were crossed through gorges, crossings, steep eminences and deep narrows in twenty days. In twenty days, 600 kilometers of front were made with routes of 380 to 750 kilometers!And in the midst of low temperatures and tremendous white winds, even in the summer. And with few casualties due to bleeding and dizziness, some chronicles speak of only two dead people, since all the remedies of the time had been planned to prevent altitude sickness and cooling. It was even advised to use mate without knowing that it contained caffeine and other substances that help combat targeting. Surely, if it existed, Saint Martin  would have intuitively planned dozens of oxygen tanks. Even the animals were cared for with garlic, which is rubbed into the animal's noses against the  soroche (altitude sickness ).

The condors of  Aconcagua  witnessed such an  Argentine feat.And not mounted San Martín on the white horse, a false representation that can be traced until 1865 in the painting of Martín Boneo After transcending the Andes, property of the National Historical Museum , and that reaches contemporary magazines and animated series . Aacute; neas, but in humble mules as painted by the mendocino by adoption  Fidel Roig Matóns  in his famous series about the  liberating  act. These majestic birds, five thousand meters away, sheltered a man who kept looking into the eyes of his people, who marched next to him: “Let us be free and everything else matters nothing.”