Home Argentine History The legend of the first Argentine president

Who does not remember about the school the famous “Rivadavia spare parts” or the notebooks that carried that same signature? To what is such a tribute? 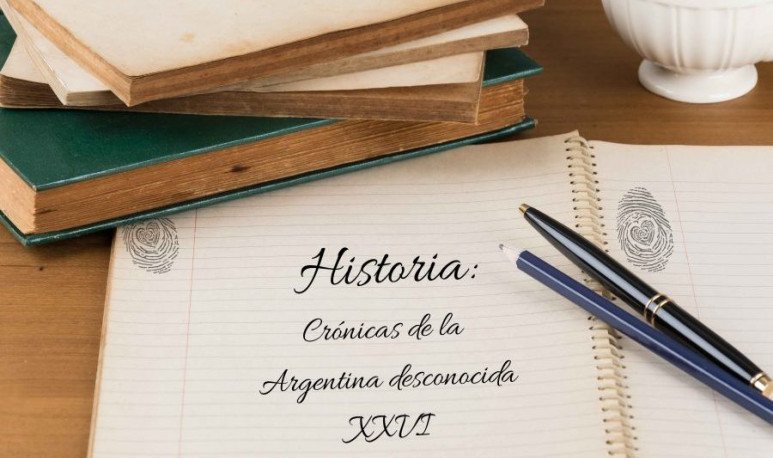 Bernardino  Rivadavia  heard that the “ apostolics ” were going to gather in Victory Square.  “ They are men of God,” he must have thought. What could they do? He was running 1823. He was still Minister of Government of  Martín Rodríguez  but his name resounded more than that of the governor himself.

When the crowd furious by the impulse of  ecclesiastical reform  made itself heard repeating  “ Rivadavia  is a toad”,  instead of disturbing, he quietly opened an old man book of notes he kept from his student times at the Real Convictorio de San Carlos. There most of the teachers were priests.

He looked at some notes made with blue ink. He had written them in 1801, being very young. Since then he kept his old notebook with two inks and their respective feathers. Those brief words scribbled on the third page, were very valuable to him, because they had emerged from a strange situation that marked him forever.

In San Carlos, priests constantly watched the pupils. They ordered, selected and controlled each of their readings. It was as if they took care of everything that would look into their minds.

There was a medieval theory about knowledge that was still in force. He said that the librarian was the one who should instruct the reader in each of his queries. Each volume carefully classified represented the solid knowledge of countless previous generations. This system ensured the permanence of a certain knowledge that would never be contaminated.

There was supposed to be nothing but generosity in that ancient action, but a clash between two ways of understanding knowledge could easily create friction between  modern education  and the  ancient scholastic tradition of San Carlos  .

Specifically, that July afternoon, Bernardino arrived at the library early. He needed a transcript of certain notes on French   philosophy  that only Father Ignatius could give him. That priest was the oldest and most cultured librarian he had ever known.

Suddenly, as soon as he came in, the reality left him ice cream. Father Ignacio had disappeared.  “ He was transferred to  Montevideo ,”  they explained. But the truth turned out to be that  between cocks and half nights,  he left without saying goodbye to the students. As a result, the library was being attended by an alternate who knew little about library science.

That was not the only rumor anyway. It seemed that  they were moving the non-theological volumes, in order to store them in a warehouse in the Convent of the Recoletos.  The librarian, many times, had allowed Bernardino's access to those profane and even dangerous readings.

The rare specimens confiscated from the Jesuits and many others recently imported from Europe would be the same fate as Father Ignacio. The  Persian Letters  of Montesquieu or the  Philosophical   Meditations  of Descartes were already who knows where. Hundreds of books were finished in drawers and trunks,  taking away the most refined forms of knowledge that existed in the Rio de la Plata.

Bernardino, who already showed a firm character, rebuked the director of the Convictorio. But he got a clear evasive answer.  The director said something like they were specific orders from someone he would never know.  Nothing could be done.

Faced with something so categorical who would have dared to react, so the young man retired from the institution. However, curiosity could with him and that same day he decided to visit the Recoletos deposit. He ran tirelessly and when he managed to arrive, his doors never opened for him.

What were the ecclesiastical authorities looking for? Bernardino couldn't believe this sneaky maneuver was casual. Then he wrote in his note book that blurred phrase with blue ink.  It is clear that the affairs of intellect and spirit must be the patrimony of nations, not churches.

Once again, awakening from such an intimate memory and returning to itself, the events of 1823 overwhelmed him.  “ Rivadavia is a toad,”  she heard again. He stroked his old notebook. Most likely that youthful reasoning led the Minister to make an unpious comparison. In Europe the new libraries were secular and freely accessible. However, in the Rio de la Plata, the Church decided what a citizen should read.

His most outstanding idea was born, perhaps, remembering that episode. In 1821 he founded the  University of Buenos Aires  and from this event, education in the United Provinces ceased to be confined to convents. Despite the advantages provided by this circumstance, the Apostolic Revolution of 1823 was ruthless. The most conservative factions rose up against the government and, as if it were a holy war, stripped the great differences Rivadavia had with the heroes that had fought for Independence.  Belgrano  and  San Martin  were profoundly Catholics.

While he was president, Bernardino remained firm in his position. Enmity with the great liberators was melted into reproaches and unforgivable disintelligences. But he went on.

It decided that education should reach a greater number of people, including women, so relegated for centuries. He then created the College of Girls and fostered  philosophy  rather than  theology  . While many of the Middle and Higher Education establishments remained linked to the Church, their interference with the programmatic development of the education system was based on principles linked to European progress.

Similarly, in those years it was not uncommon to hear or read pamphlets with strong reproaches of  Rivadavian   interventions  . The country was very fragmented.

Despite everything, the culmination of his project came in 1884, forty years after his death.  Julio Argentino Roca  's educational reforms then recognized that Rivadavia's educational action had been the most relevant until the rise of Domingo Faustino Sarmiento.

Precisely in those days it was when a series of editorial innovations appeared that involved the  Estrada   Company  . They had designed vignettes and typographies dedicated exclusively to the names of the heroes.  The founder of the University of Buenos Aires became one of the main honors.

First  Rivadavia  was the name of a “ print typography ” and after a “ replacement of calligraphic essays”.  Finally, carpwork sheets and notebooks ready to take to school. Maybe that's why Rivadavia's firm recycled in an editorial brand, is one of our first memories. One that we evoke when we come to mind the first letters we write in childhood perhaps with blue ink.

The tortuous relationship of Rivadavia (to the center), Belgrano and San Martín (left and right) was marked by their anticlerical gaze of the state. Probably the ties of the three men with the  Lautaro Lodge  had different dimensions exactly for this aspect. Rivadavia's taste for European intellectuals called Ideologists and Illuminists is no accident. All these authors fought for secular education. Despite this circumstance, the Apostolic Revolution also did not support  Saint Martin  when Rivadavia forbade him to step on Buenos Aires soil. 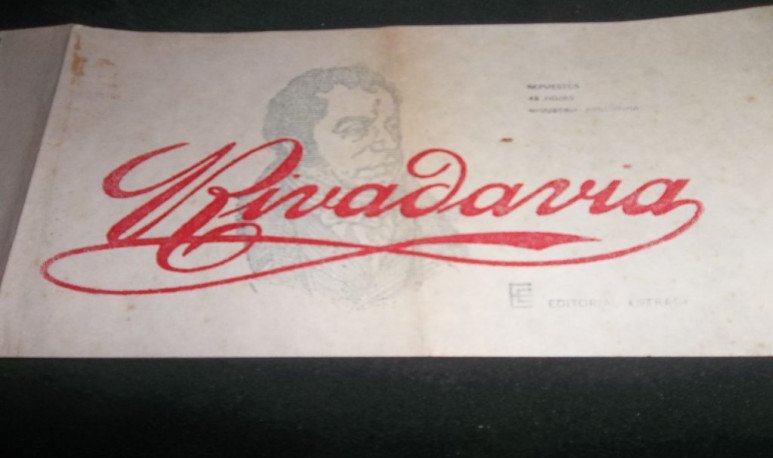 The spare parts of sheets with the firm of Rivadavia, have their origin in the educational reforms of its Ministry and Presidency. They are kind of homage to the first attempt to create a secular education. Rivadavia fought against the theologization of education and for the forms of teaching born after the French Revolution. Similarly, it had introduced the Freedom of Expression and Press Act during the First Triumvirate. 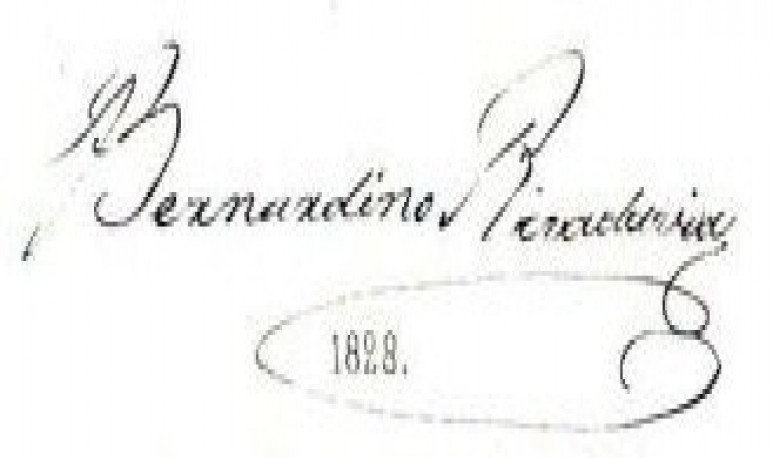 The original signature of Rivadavia as contained in the personal documents of 1828. The three chapters of “The legend...”, cover bibliography of diverse origins. The details of the  Rivadavia Armchair  coincide in authors as ideologically distant as Luna and Pigna. In “Bernardino Rivadavia” by the first author, Editorial Planeta, it appears that the armchair is a concept. In the case of the second author, “Mytos de la historia argentina”, also published by Planeta, he observes a robust anecdote where he comments that “there were many first presidents” due to various circumstances in the country. appliances. On the other hand, the circumstances described in “Politics and Diplomacy in the Rio de la Plata” by Juan Carlos Nicolau (2008) and “Historic” by Emilio Perrot, the context that gives rise to the Myth of the Armchair as well as the Rivadavian loan, are very clear.

To see what was the relationship between freedom of expression and the various governments from the First Triumvirate until 1850, it is interesting to approach Fabio Wasserman's work, “Notes on Diarism in the Porteña Press of the 1850s.”Patrice Vermeren and Marisa Muñoz “Rethinking the 19th century from Latin America and France. Tribute to the philosopher Arturo Roig”, Buenos Aires, Colihue, 2009. The influence of Rosas and his Cob in the middle of this process means a discontinuity in the evolution of Argentine freedom of expression. However, from 1811 until Mitre's presidency, there was a need to create laws capable of establishing censorship in very few cases. Rivadavia himself lawfully proceeded against Dorrego's sayings in the newspaper El Tribuno, however the then so-called “freedom of printing” remained. Dorrego, whose political position was clearly “federal”, vehemently attacked Rivadavia's “unitarianism”. 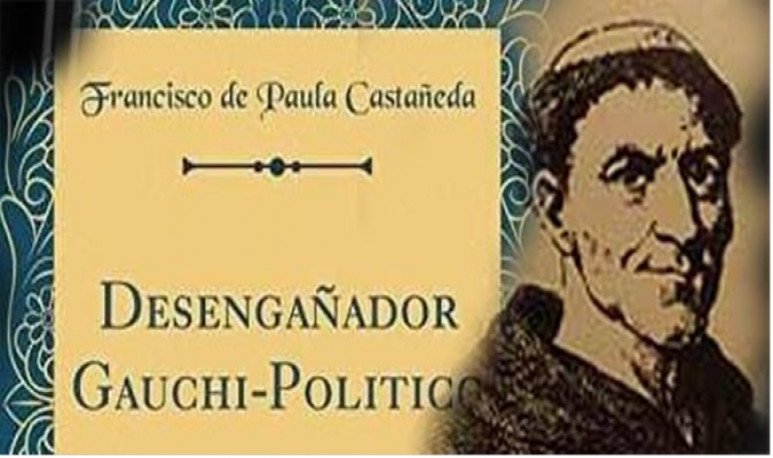 The Gauchi-Político was a newspaper run by the Catholic priest Francisco de Castañeda. There he inaugurated the preferred insult of those who rebuked Rivadavia during the 1823 riots. “Toad of the Flood” (...) “the Toad Rivadavia” (Castañeda's words dedicated to the then Minister). When Rivadavia thought of secularizing many Church goods and ending the monopoly on education in Catholic convents, a reaction known as the Apostolic Revolution took place.

The Apostolic Revolt has its origin in the reaction of Catholic institutions against the road to a secular state. This coincides with the original association of revolutionaries to Freemasonry. The subsequent relations that Rivadavia cultivated with the concentrated economic power in the province of Buenos Aires or the unpayable debts he contracted to the United Kingdom did not seem so important to him. But education was the future. Among the most critical environments of his  educational policies  and  ecclesiastical reform,  he came to be the Robespierre of the United Provinces. The complex circumstances pertaining to the matter can be seen in “Year X”, by Hugo Wast, Editorial Goncourt, Bs. As, 1970. While Wast's ideological and if reproachable context is very doubtful, the description of the existence of a secularist movement is plausible. “Argentina 1516-1987”, by David Rock, Bs.As., Alianza, 1987, shows in turn the other side of Rivadavia: that of the iron “unitary”. Also from his relationship with Mariano Moreno onwards, this description can be seen in “The stages of may and the real Moreno”, Ediciones Theoría. Bs. Ace., 1963. With regard to Estrada Publishing House, see “National Foundry of Types for the Estrada Family Printing Press: Towards Argentine Typographic Independence”, by Marina Garone Gravier and Fabio Ares. National Library, Estrada 125th anniversary