Home Argentine History The largest dinosaur in the world, is Argentine.

It is the largest terrestrial animal in the history of this world, according to remains found recently. 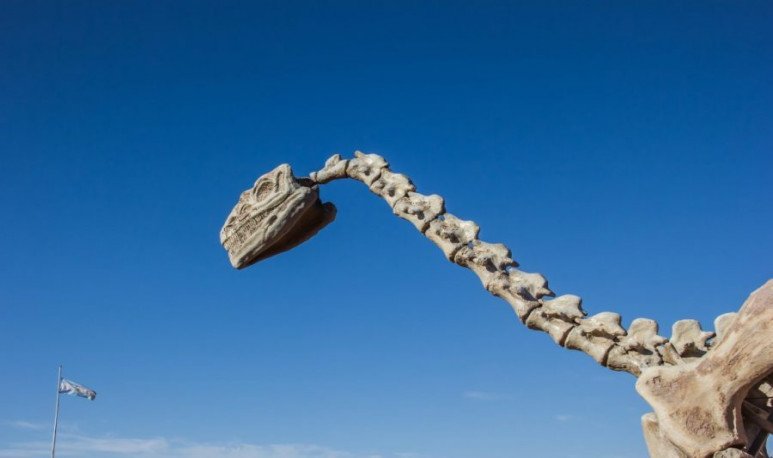 Over 94 million years ago , during the Cretaceous Period, the “Reptile of Argentina in Plaza Huincul” lived in Patagonia; the largest terrestrial animal in the     history of this world, according to remains found recently.

Since the fossils found so far are few, it is difficult to specify their actual dimensions, which are estimated to be around 33 meters long and 70 tons in weight. The only existing remains were discovered by chance in 1989, by Guillermo Heredia, in his field in Plaza Huincul , in Neuquén, Patagonia.

Thanks to the fact that Heredia gave notice to the Carmen Funes Museum, a paleontological commission was formed composed of this museum, that of Cipolletti , the National University of Comahue and a YPF excavation team, which investigated about the dinosaur and its habitat.

Reaching the aforementioned conclusions of time and size; and the natural landscape in which he lived, which was very different from the current environment: more exuberant and warm, with temperate or subtropical forests and extensive plains; opposite to contemporary, semi-arid and dry.

Currently, there are two replicas of Argentinosaurus Huinculensis in the world: one in the Carmen Funes Museum, and another touring Europe, which was built in the museum's workshops.

The discovery of a new giant dinosaur could dethrone Argentinosaurus

In 2014,  a group of paleontologists announced the discovery under Argentine soil of the  “greatest creature that has walked on Earth.”

After analyzing the length of the huge bones found — in particular the femur, but also others belonging to its lower limbs — it could be estimated that  this giant dinosaur was 40 meters long by 20 meters high . Weighing 77 tons, it is believed to be as heavy as 14 African elephants.  It is also seven tons heavier than the previous record holder, theArgentinosaurus.

Scientists believe that we are in the presence of a new species of titanosaur. These are huge herbivores who lived during the Late Cretaceous, that is, the era of prehistory that corresponds to the last days of the dinosaurs.

How did they find the remains of this impressive animal?

A local farmer stumbled upon the remains in the desert near La Flecha, an Argentine town located about 250 kilometers west of  Trelew , Patagonia. Then the fossils were excavated by a team of paleontologists from the Egidio Feruglio Museum of Paleontology, led by doctors José Luis Carballido and Diego Pol.

During the excavation, the partial skeletons of seven specimens - about 150 bones in total - were unearthed all in “extraordinary condition   ” . “Given the size of these bones, which outweigh any of the previously known giant animals, the new dinosaur is the largest known animal that walked on Earth,” said paleontologists. “ Its length, from the head to the tip of the tail, was 40 meters. Standing, with your neck up—which was about 20 meters — we're talking about the equivalent of a seven-story building.”

After analyzing the age of the rocks in which the remains were found, it was possible to determine that this giant herbivore lived in the forests of Patagonia 95-100 million years ago.  “ It will be named based on its magnificence and in honor of the region and the owners of the farms who alerted us about the discovery,” the researchers said. And so it was, the name chosen was  Patagotitan mayorum  (“Titan of Patagonia of the Mayo family”)

There have been many previous contenders for the  “largest dinosaur in the world.”  The most recent pretender to the throne was Argentinosaurus , a similar specimen of the sauropod family, also discovered in Patagonia. Initially it was thought to weigh 100 tons, but then it was estimated at 70, a little less than the 77 tonnes believed to weigh this new sauropod.

The weight and magnitude of the Argentinosaurus were estimated from a few bones. But on this occasion, Argentine researchers have dozens in their possession, which generates  more confidence in ensuring that they found “the greatest”.