Home Argentine History The Jewish gauchos who made Argentina

Today museums in Moisés Ville, and the new colonies of Santafesina, remind us of the efforts of the Jews who made the pampa gringa with blood, sweat and tears. 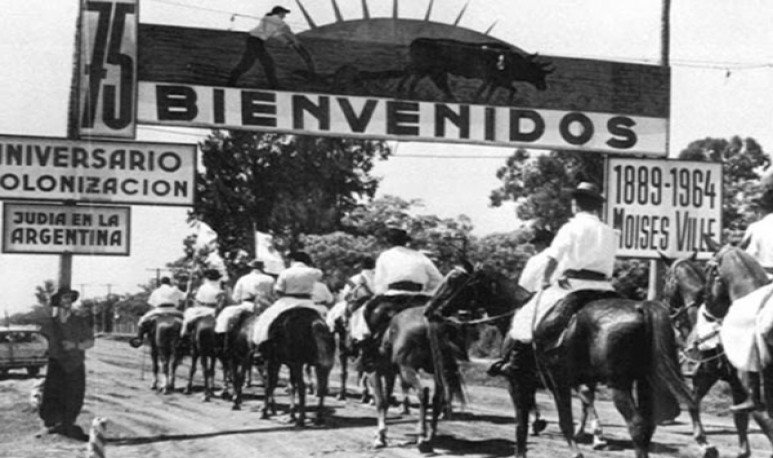 Anti-Semitic terror was rampant in Europe. In France Catholic intellectuals harassed Jewish “Avars and Pharisees”, even socialists and communists considered them the visible face of capitalism to collapse. Prussian Germany, militarized, excluded them from social life in ghettos, and thus imagined to conjure up a corrupting element of the “virility” of their armies and Aryan society. All this was only a continuation of the progressive strengthening of the national bourgeoisies opposed to the place which Jews had occupied since the Middle Ages as merchants and lenders, due to the prohibition of Christian lands for the children of Zion.Russia was the epicenter of the systematic repression, displacement and rape of the Jewish people carried out by the  pogrom  of Tsar Alexander III. This gloomy panorama originated the discussion at the Basel Assembly of 1897, where the Jews of the world faced choices that would change the face of the earth, retire, assimilate or escape. The English offered Uganda and the assembly members opposed it. And at that congress they ended up in agreement on the horizon between Palestine, which was only in 1948, and  Argentina . The fact is that the United States, the most publicized country of the time, the easiest and most economical to emigrate, was beginning to show worrying signs of persecution in New York. The scale tilted to the side of a country then totally unknown, almost uninhabited. Although some data had for the action the banker and philanthropist  Mauricio Hirsch,  who a few years earlier had started to finance the caravans of Polish and Russian Israelites to the South, at the behest of the great designer of this great mass movement, Theodore Herzl. The first colonies settled in  Moisés Ville (Santa Fe)  and  Dominguez (Entre Ríos)  Although Buenos Aires had its Israeli congregation since 1868, it was after the congress in the Swiss city that the arrival intensified even further. Some stayed in Buenos Aires, several returned in the first five years, but the vast majority left for the Litoral mainly.To work the  pampa gringa  like other Spanish and Italian immigrants, even in the neighboring lands that were of Germans and Russians, their persecutors in the Old Continent.By the end of the 19th century almost 70 percent of the rural population of Litorale was foreign, with the vast majority of Jews, and owned 60 percent, including Cordoba. There were no large estates or landowners in Santa Fe, Entre Ríos and Corrientes, the provincial governments themselves tried to prevent it, and that prevented agricultural colonies from failing as in Buenos Aires. And they were the birthplace, that  Jewish pampa , “which sowed corn and harvested doctors,” so that today  Argentina proudly exhibits  two-thirds of Latin American Jews.

It was not the promised land, it was the land made at will and intelligence

The beginnings were not easy for men, women and children who came to live together between gauchos and the  legends “of payment , land that housed rustlers and tigers”, in the immediate vicinity of the train and...n  Dominguez . Behind them they left bleak news of mother Russia and said to each other, “here we will work our land, we will take care of our cattle, and we will eat our bread”, in the immortal words of  Alberto Gerchunoff's “The Jewish Gauchos ”. As an incentive they arrived in an Entrerrian province that had pioneered military agricultural colonies such as  Camp Calá , the first agrotechnical schools in the country, and the foundational Swiss-French colony in  San José, near Colón . When in 1876 Law 817 of  President Nicolás Avellaneda  established protection and maintenance in transfer for immigration and colonization in the national territory, with the access to fiscal land to settlers,  Entre Ríos had been almost twenty years since the progressive policies initiated by  Justo José de Urquiza.  In several souls escaped from the genocide of the European  pogrom  were sung some verses learned between endless journeys, and the desolate hours of the  Hotel de Immigrantes porteño , “we will sow, friends and brothers/ to be free and live”

On August 14, 1889, 824 people arrived in the German steamer Wesser, 136 families, who in the heart of  Santa Fe  founded  Moses Ville,  the first Israeli colony, and the birthplace of  the Jewish gauchos  . With them came the first rabbi in Argentina,  Aaron   Goldman,  who was also circumcised and matarife. And also his sacred books that were instruments of culture and identity in a hostile mountain of Argentina, along with the liturgy, Rosh Hashanah (Jewish New Year) and Yom Kippur (Day of Atonement). Seventy children died from an epidemic and starvation. The locusts and lack of knowledge did everything uphill, besides they didn't know Spanish and the creole distrusted him.  Hirsch  himself had recommended that the beards and the kaftans should be cut off so that they would not cause strangeness. And then in the country, gauchos clothes, more comfortable for rural work, ended their winding. Sometimes the tanos - Italians - who were building the railroad, and the old Baqueans, who felt like  Martín Fierro  that they were brothers in the outrages and discrimination.

Alfalfa saved the Jewish people from famine for years. And the mate, which they start to drink with a sugar cube, something they would then impose on the cities. Only in 1892 they began to raise their heads with better harvests, with the tailwind of economic recovery and high prices of cereals and flax on the international market. And in 1893 they founded the first cremeria organized by workers in  Argentina.  Already at the beginning of the 20th century they built in Moisés Ville one of the most important social and cultural projects in the region, with a 400-seat theater, four temples, two libraries and a cemetery, the oldest Israeli. A whole infrastructure for five thousand inhabitants, who today do not reach even half.

A few years after  Moisés Ville  settled in  Basavilbaso  ,  Entre Ríos  , another contingent sponsored by the  Jewish Colonization Association of Hirsch  . Buying land from speculators and the family of former governor Basavilbaso, the Israelis work from the sun alone under the name of  Colonia Lucienville , and would reach over 1,500 houses, arranged perpendicular to the town's strategic railway node. Nor was it easy due to ignorance of the culture and ecology of the place. Successive locust plagues were a real curse for years. The helplessness, and the shared difficulties, led them in 1900 to found the  Israeli Agricultural Society , the first agricultural cooperative in the country, later called the  Lucienville Agricultural Society . It had a central importance in the development of the  Argentine countryside in the Littoral,  being an efficient intermediary in the access of knowledge, and support of farmers in the face of adverse crops, or injustices with the progressive weight of intermediaries and bureaucrats. Also with the support of their own pockets to culture, with their libraries and bilingual schools, where the  Jewish Sarmiento stood out, Yedidio Efron , the father of the great journalist and producer   Oh, Mr. Blackie .  And not only for the members of their association... Article 3 states in the Constitution, “acquire agricultural knowledge through the testing of different crops and once the security of their advantages has been obtained... it shall be responsible for disseminating these to settlers whether or not they were or not members” Moreover, the first hospital, on land donated by the Jewish Colonization Association, the first popular library and the first pharmacy in the region were promoted, financed and supervised by the  Jewish gauchos.

In recent years, there has been an interest in repopulating villages in the  so-called Argentine Interior in upper middle classes and professionals. Although the reasons would be long to list, there is a diagnosis of exhaustion of urban models of interlocks. One of the projects is in the former  colony Mauricio Hirsch (Buenos Aires),  where the first Israelis arrived, although it was a mostly Italian settlement over the years. There is writing the future of a town that reached three thousand inhabitants a hundred years ago and was about to disappear. Thanks to the solidarity effort of some of its inhabitants it was possible to restore the  Old Warehouse of the Agrarian Club , says Leandro Vesco in his meticulous  “Unknown Buenos Aires. Stories of Frontera”  (2019), and nests the hope of “some houses so that people who want to have a place to stay,” says neighbor Alberto Sigal, close to Rabbi Goldman and the songs of “we will go, friends and brothers/to be free and live” He also adds the recent and successful experience of  Colonia Belgrano in Santa Fe , with the installation of fifteen families, work of NGOs and provincial government. Pandemic months accelerated consultations for these agricultural peoples of the gringa pampa, with thousands stories to discover and share on sites like somosarraigo.com Beyond the success, or long-term failure, of Jewish agricultural colonies, and we extend, gringas in general, should remain the teachings of cooperativism: a society with a human face that is the basal stone of  argentinity.