Two great liberators who shared the command of the patriotic armies face to face in a fact that marked Argentine history. 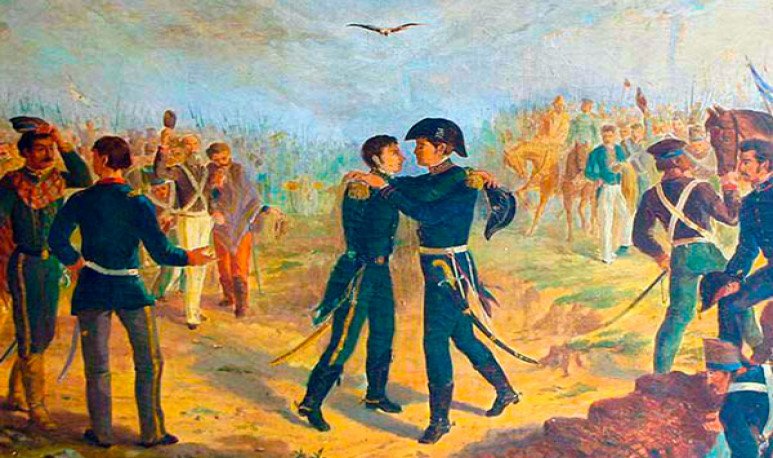 La  Posta de Yastato  is a former construction located in the province of  Salta  and known for being the venue for  important historical meetings  in the times of the first ndependencia argentina.  This rural mansion from the colonial era is imprinted on its walls indelible moments in the history of our country, and was a place traveled by the armies of the homeland and repeatedly visited by General  Manuel Belgrano.  Also the space where the creator of the flag handed over the command of his forces to  José de San Martín.

After creating the cockade, on February 18, 1812, and the Argentine flag, on February 27 of the same year, the Government of Buenos Aires asked  Belgrano  to move north to stand at the forefront of the armies. The general arrived at Posta de Yatasto, where he received command from  Juan Martín de Pueyrredón.

At that time, the post were properties that were made available to the Government, even the neighbors contributed cattle and horses so that they would then be issued a receipt and thus subsequently receive a contribution for it. Yatasto belonged to the  Vicente Toledo and Pimentel family, who supported the patriotic cause by offering the auxiliary army 1300 horses and 100 cows. Here was one of the most valued historical moments by Argentines: the meeting of the two great military chiefs.

Between 18 and 21 January of that year, San Martín  and Belgrano met between the Posta de Yatasto and the Estancia de los Algarrobos. On January 18,  the Second Triumvirate decided that San Martín would remain in charge of the Patriotic Army and that Belgrano cease to that function.  However, the delay in the news caused Belgrano to continue its work until 30 January and even ordered San Martin to return to Tucumán and seek recognition as second in command.

When San Martin returned to the province of Tucumán, he was noted of his new appointment, which Belgrano recognized and proceeded to transfer the command of the militias. This occurred in San Miguel, where part of the army was located.

Historians say that was the first time they both met in person. However, they were known from before because  they had maintained a communication through letters,  which generated a sense of esteem and respect.Belgrano knew that the Army was in good hands, that the countrymen could be taken out of the slavery in which they lived, because both shared the  ideal of serving the common good of the homeland.

Since 1950 it works as a museum that allows for  an incredible experience, a journey through time and the paths of our greatest patriots.  In addition, La Posta hosted Martín Miguel de Güemes,  a military and politician whose figure is one of the most recognized and valued by the Salteño people.

With lime bleached adobe walls, this hacienda features a tall balcony and carved wooden doors. In 1942 it was declared a  National Historical Monument . The construction preserves the furniture and some objects that allow to reconstruct and evoke historical events that marked the  country's independence path.

On the construction hangs a plaque that reads: “San Martín and Belgrano met for the first time in this house, in January 1814, agreeing military genius and self-denial - the verb of American emancipation.”